Armor is the simplest type of protection you can put on your ships. It doesn’t go down like shields do. It doesn’t have complex targeting mechanics like active defenses. It just works. The level of protection it provides against any one attack isn’t as great as what the other defenses can provide, but because it’s always in effect, it ends up providing (somewhat) superior protection in the long run.

How much does armor reduce damage?

Dispersion Armor I provides a Armor rating of +86 against weapons with the Energy Damage Type.

Neutronium Armor I provides a Armor rating of +41 against weapons with any Damage Type.

Combined, these provide a total Armor rating of +127 against Energy weapons, and +41 against Force and Explosive weapons, but that’s not the whole story, because every ship has its own natural Armor rating. As you might expect, capital ships – Battleships and Dreadnoughts – possess the best base armor, but what’s less intuitive is that fighters – both light and heavy – possess the second best base armor score. Escort class ships – Corvettes and Destroyers – sacrifice some of this protection for their combination of speed and firepower. 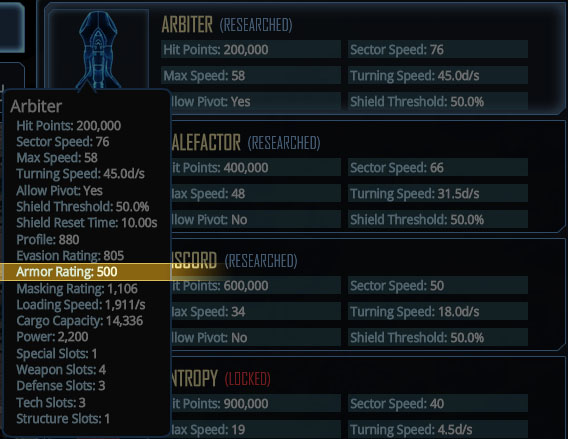 The Armor Rating property of a Corvette.

In total this means that every ship has a basic level of protection from its armor, and that armor modules you add to your ships combine with that to determine total protection. Combining the modules with the defenses of the Corvette pictured above for example, we’d see total ratings of 627 versus Energy, and 541 against everything else, which equates to a damage reductions of 14% and 5% respectively. Stacking them in this way demonstrates a 1% loss to diminishing returns (Dispersion Armor I’s rating of +86 would give us a 10% reduction of Energy damage on its own).

The armor on capital ships is, by comparison, much tougher. With a base rating of 1106 and the same modules in the example above, the total ratings would be 1233 against energy weapons and 1147 against other attacks, affording a whopping 56% and 52% damage reduction respectively. Here of course, diminishing returns makes a big difference, because the base armor rating of the ship itself is much higher. And this would seem to make armor a bad choice for big ships, right? Well not quite, because armor – unlike shields – can be directly countered by certain weapons.

How does Penetration work with Armor?

Armor is the oldest sort of protection there is, and as such it should come as no surprise that many weapons have been developed that have powerful armor penetrating capabilities. Most of these are designed to be deployed against capital ships, and thus carry enough penetrating power to cut through even their very thick defenses.

Particle Blaster I comes equipped with a Penetration rating of 606.

A weapon’s Penetration rating is subtracted from the target’s total Armor rating before diminishing returns are applied. Continuing the examples above, this would mean that (considering the Particle Blaster is an Energy weapon) the corvette’s total Armor rating would be (500 + 127 – 606) = 21, affording him practically no protection, but that the capital ship would have (1106 + 127 – 606) = 627, which provides him with a 14% reduction in damage taken. Without the armor modules, the capital ship would have had (1106 – 606) = 500 Armor, which (as our baseline value) would mean he takes basically the same damage as the Corvette would.

When should I equip armor modules?

How much good you’ll get out of using armor modules will depend a lot on what weapons you’re up against. NPC enemies are fairly predictable in this respect, once you learn which kind is which, so you can take the right fleet in for the job, but in PvP it’s more difficult to predict. Think about what you’re putting on your own PvP ships, and what’s popular with your friends and enemies, and protect against that. Armor modules are most effective against non-penetrating weapons for ships with low base armor, and against penetrating weapons for ships with high base armor.