The galaxy is a dangerous place. In the long run, no one can truly prosper on their own. Trade drives the galactic economy, and the conflicts between states and organizations spur the technological innovations which advance the state of the art in all aspects of modern life. Alliance is the heart of community, the structure needed for victory, and the basic unit of profit.

With our upcoming update, players will be able to make and join alliances, organizing with each other in the name of self defense, conquering their enemies, and reaping the maximum value from all the opportunities the universe has to offer. Any player who’s not already a member of an alliance can start a new one, and begin building their own player community. 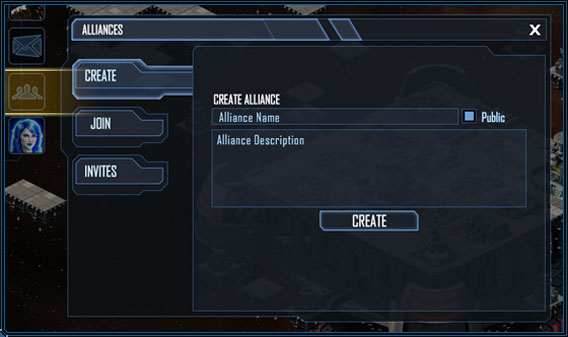 Set up alliances from the alliance menu on the left of the screen.

To help you organize and run your alliance, you’ll be able to promote members to the rank of Officer, affording them certain abilities and privileges:

Recruiting new members for your alliance is as simple as inviting them, which you can do yourself or delegate to your Officers. Alliances are limited to 100 members at a time, so choose your members wisely, but don’t be too concerned – you’ll be able to manage your membership, and we may allow you to expand this limit in the future. To invite a player, do any of the following: 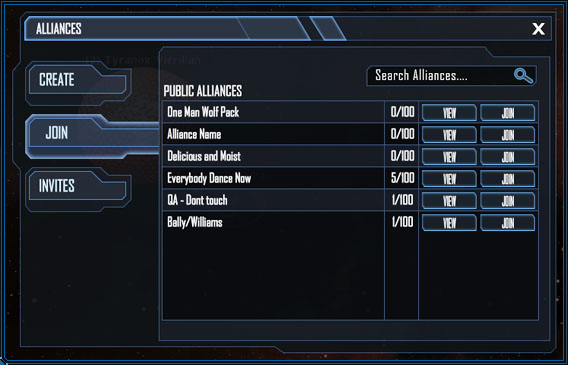 Players can join public alliances from the alliance list.

Alternately, as the alliance’s Leader, you can set your alliance to Public status, allowing anyone to join it. Public alliances are shown on a common list from which anyone in the game can join them, and follow different rules from regular alliances:

As part of an alliance, be it the Leader, an Officer, or a regular member, you’ll be part of a private alliance chat channel which you can select from the drop down menu on the chat interface. Your alliance’s name will also be shown beneath your own name on your fleets and base in sector view, so others will know what you’re a part of.

Selecting the alliance chat channel from the channel list.

So, get out there. Make friends. And conquer the galaxy together!