I’ve had a slew of PMs asking about my spec, so I figured I’d make a post to have a place to direct people.

This is an endgame build… if you aren’t level 60, then you need to level up before you attempt to pwn dungeons with this build, just a heads up.

The name of the game is Crit, Divinity building (D) and action point (AP) gain (which is Recovery), nothing else really matters for this build. Another really strong point is that with all this STR, your stamina meter recharges faster = more dodges.

Companion: Ioun stone of Allure/Astral diamond Cat. These things are amazing. You literally get 100% of the stats from the gear you put on them. Then, you use an Eldritch runestone, and get another 8-10%. I personally feel the stone is probably best for cleric – the only real difference is a belt slot (cat) v. a cleric offhand slot (stone). Decide how you will.

For purple weapon enchantments I’ve tried Holy Avenger (because with your heal debuff, Damage Reduction is a much better choice than other enchantments), but with such a huge ICD, I’ve since re-slotted Vorpals. I guess that makes sense on a crit build!

Purple armor enchants I use Soulforged, because you are going to be the target of a LOT of pissed off adds. When it procs, you can get yourself back up pretty well.

For class set gear, I’ve been using 2/4 Miracle Healer, and 2/4 Beacon of Faith. Doing some testing, 4/4 Miracle just isn’t worth the ~600 power you end up losing over 2p Beacon. Maybe if the Miracle 4p worked like it says it does, it would be worth it (still have my Miracle gloves/greaves, just in case they fix it!).

Pro tip: Use your Ardent coins to buy Wild Storm elixirs, they raise your crit by 300, and crit severity by 10%, for an hour. Can also use your Celestial coins to get elixirs that raise all your attributes by 1, and stacks with campfire buff. That’s win.

At wills: Brand of the Sun (BotS (mobile divinity gain)) and Astral Seal (ASeal (D gain/heals)), spam these when everything else is on cooldown for D/APs. Put BotS on every mob you can for passive D gain, then use ASeal for the per cast D gain. If people aren’t in need of healing very much, I will sometimes swap ASeal out to Lance of Faith (LoF), less passive healing = less agro, AND it’s more damage.

Encounters: Forgemaster’s Flame (FF), Astral Shield (AS), Sunburst (SB). You might swap out SB for Healing Word (HW), depending on the fight. If you do this, you will also swap passives (below). Prophecy of Doom (PoD) is another viable option, as it gives you a LOT of AP, based on how often mobs die. Sometimes if there’s another cleric, I’ll get bored and slot Daunting Light – I’ve crit mobs for over 40,000 with this skill, it’s crazy dps if you don’t need to heal much!

If you can’t cast AS with D, then don’t cast it. Pretty much same goes for FF, unless you need to build D for AS. If you’re using HW, you spam per cooldown, this spell should never be off cooldown, it builds a massive amount of AP/D while stacking regen on yourself. It doesnt even really matter who you put it on, just getting the regen on yourself is the important part. After all, you ARE healing yourself for -40%, for some reason…

If you’re using PoD, you target the mob you KNOW will die in the next 4-5 seconds, any non-elite add will work perfectly. Watch your AP go up and grin. Casting a D PoD on the right target will net you about ~25% of a daily meter. Use this to your advantage.

Sunburst is pretty much get as close to as many mobs as you can, and blast them all (hopefully off of a cliff!).

With the massive amount of AP gain I have in this build, I can use this about once every 30 seconds, and even more often in sustained fights. Combined with Moontouched feat, this is an amazing skill. I use this ability religiously. Use PoD and/or SB correctly and you will LOVE this skill.

Passives: I change these out depending on the fight. I usually use Holy Fervor (HF (+AP gain) and Foresight (+mitigation).

Slotting Soothe will not stop you from getting adds on you. You’re healing everyone for a ****-ton, they hate you. Slotting soothe will make it easier for a competent party member to pull those hating adds off of you. I refuse to spell soothe wrong.

Foresight is a great passive (assuming it works, as it doesn’t add to your DR on your character sheet). Feated, it’s +11% DR for everyone. If you’re constantly fighting off adds, you’re better off with soothe/foresight. If you’re OK with dodging adds a bunch and/or your group can handle them for you, HF and Foresight is the way to go.

If you are using HW, you should also slot Divine Fortune over one of the other passives.

Had enough people ask so here’s a pic: 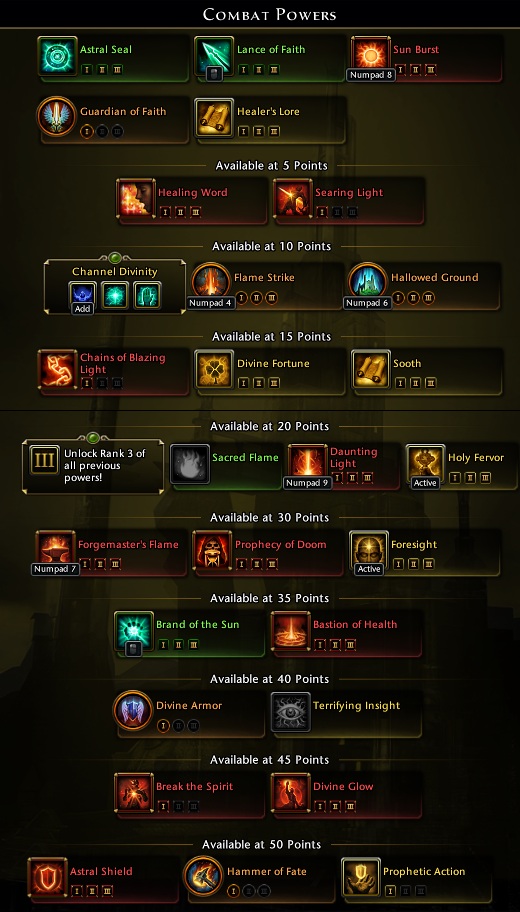 I put 3 points in every skill I figured would come in handy dungeoning.

I put 1/3 in Cleanse because there’s no point not using 1 measly point to get passive cures.

You’re maxing out Enduring Relief (+ heals), Benefit of Foresight (+DR), Invigorated Healing (+ heals), and Moon Touched (+ heals) in the Faithful line. When I was first doing dungeons, I’d take the 21st point into Faithful for the 4th pip, and would gain all 4 before a big fight. Once you know what you’re doing in a fight, it’s unnecessary. But it really helps in the beginning of fights where you have to kite like crazy and don’t have a lot of time to build up D.

Righteous line is Rage of Tempest (D gain) and Ethereal Boon (4/5) (D gain). Ethereal Boon is incredible, as you can gain D while in D mode.

The 2 in Virtuous is for Rising Hope, it procs power and recovery, and has a near 100% uptime with only 2 points in it. 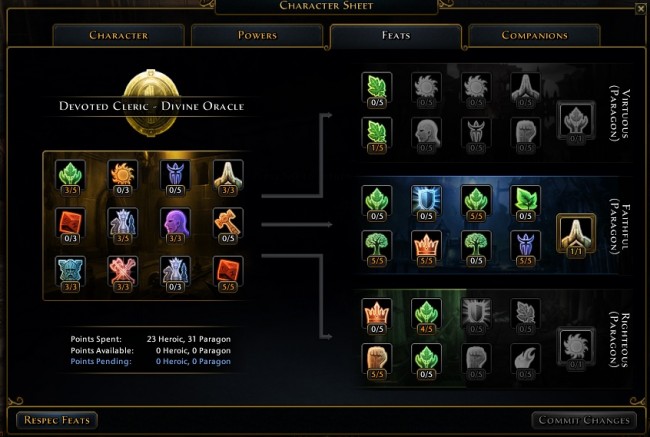 My basic “rotation” is to throw down a D AS, followed by a D FF, spam all my HWs (if using those, otherwise strategically place (D) PoDs), then either hit Hallowed Ground or spam at-wills until AS is ready to cast again. I can keep a D powered AS up 100% of the time with this build.

If I’m using PoD, I aim at the non-elite mob with the lowest HP. You’re trying to get it off CD, not do damage here. If I’m using SB, it’s run into your AS, and then just blast everything for a ton of AP. Which skill you use should depend on the fight, the better you know the fights, the more you’ll know which skills to use.

I’d like you to keep in mind, it took me a while to get to this exact build, changing it over time as I got better gear, and info/suggestions from other min/maxers . I’m currently sitting at 12k+ gear score, with 42% crit, 36% recharge speed, and 51% AP gain (with HF), solo. This only gets better if you have a good rogue, CW and GF that actually spec for group buffs… I’m at 48% crit in a group.

For the most part when I run an epic dungeon, I’m around 90%+ of the healing.

A side note: this is actually the most fun I’ve had in an MMO while playing a pure healer. You have to be on your toes the entire time, AND you can’t heal yourself like you can heal everyone else, it’s hectic. My best advice is to check out this build, and change it to your liking, but I’ve respecced several times (spent about $60 so you don’t have to lol), and I haven’t found a better one. I love the way this build plays.

Added in a short video of guildies and I on the last cloak tower boss. What you’re paying attention to is my D gain, AP gain, and the solid stream of green numbers pouring off my allies. This is how you heal in this game. Yes, we outgear it, this was just to have an example to show.

This last one is just an example of what to expect on the harder fights. Tons of kiting, tons of damage, tons of luck. I go down at the end trying to be a good Samaritan lol It was a blast.

Spellplague boss (epic uptime on AS with all the chaos IMO)

I feel like that video is a very good example of why we don’t need a **** heal debuff on ourselves.

Chime in on my thread about Righteousness and let’s get it removed!