DISCLAIMER
This guide is purely based on my own experience, so a lot of work/research still needs to be done. Your inputs are most welcomed here.

This guide is strictly for Las Noches only. For any other things, please refer to DamageInc’s guide here.

About Las Noches:
Las Noches can be considered as one of the main sources of experience for high level players (other than medals for exp). It is one of  the two areas accessible inside the Demon City (click World Map on the top right hand corner of your screen, then click the top middle area on the map, it is a city with blue mountain as the background). Once inside, click the bottom middle area of your screen to interact with Kisuke Uehara, the person in charge of this place.

Choose to enter Las Noches (you only have 2 tries per day, so use them wisely), and he will give you another 3 options:

Once you have chosen an option, your Las Noches journey will begin. Another box will pop up with a few options:

Start Challenge/Continue Challenge: to proceed to the next floor, as simple as that.
Auto-Challenge: pay 28 gold to automate your Las Noches journey once, or 58 gold to automate your Las Noches journey twice (you will be ejected out of Las Noches once you die and all experience will be automatically claimed).
Buy Faux Body: to purchase 1 Faux body for the price of 28 gold (you can only purchase 1 Faux body per Las Noches tries).
Claim Rewards: to claim the accumulated experience so far (use this if you have no more Faux body left, as losing to a mob without any Faux body means 50% deduction from your accumulated experience, and you will be ejected from Las Noches immediately).
Leave For Now: to leave Las Noches without losing your current progress. You can go back to town to replenish your health/chakra or restock on potions.

Monster Compendium
This is a list of the monsters that you will encounter at different stages (excluding the bosses/Espadas).

Rudobon
This is the most basic monster that you will encounter. Its stats are rather balanced. You should easily deal with this.

Cannibal Hollow
At higher floors, this monster has a trait of having huge health pool, so skills that deal a percentage of its hp would be good.

Gillian
Similar to the first boss you encounter at floor 10, nothing too special about this one, although it seems stronger than Rudobon.
Appears every 5 floors (other than boss floor) or so it seems.

Malicious Hollow
This monster deals tons of damage. You might want to try to minimize the damage you take as much as possible. All the monsters in this floor range have huge health pool as well.

Ghastly Hollow
This monster has a very high speed, especially at higher floors. Use the same counter skills against a speedster build.

Roy
This monster has a more balanced stats. It is comparatively easier to deal than the other monsters. Still, proceed with caution.

Malicious Hollow
This is an upgraded version of the previous one that you have encountered. Basically a combination of high health, damage and speed. Just reaching this far is already an achievement.

Ghastly Hollow
This is also another upgraded version of the previous one. All the monsters in this category have very high stats, and are very difficult to kill. 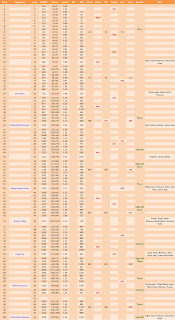 CREDITS to WingZHG and babot321.

As you can see from above, the higher floor you go, the more attack damage and health that the monsters have. So the main idea here is, to kill the monster before they kill you. You need to deal as much damage to them as possible, while preventing them from dealing damage to you at the same time. Pet block is very important here as well, to reduce the damage as much as possible. The build is either to go for speed+damage in order to take down the monsters fast, or to be tanky/dodgy in order to minimize the monsters’ attacks. As I am a lightning speed-control character, more inputs are still needed for different builds.

This is a very important skill to minimize the damage that you take as much as possible. This skill is what practically keeps you going at higher floors, especially when the monsters start attacking you with 1000+ damage.

This is your main damaging skill. With the huge health pool, there’s no way you can bring down the monsters’ hp with just normal attacks. This skill can practically double your damage if you manage to land enough attacks during its period. Best used in a speedster build.

This skill is very good when combined with Detonating Clay. The 50% reduction in speed alone can literally means half of the monsters’ attacks are being prevented, and you can land more attacks during this period.

This skill deals massive damage against monsters with huge health pool, and it causes them to be stunned as well, thus allowing you more attacks during this period as well.

This skill allows you to land 2 attacks in 1 turn, and can even chain up to deal more attacks if you are lucky enough. Basically the bread and butter of a speedster build.

This skill gives you an additional attack that slows down the enemy. Good for controlling their speed and hence reducing the number of attacks that they do.

This skill deals a good amount of damage plus slowing down the enemy. The only downside is that it costs a bit of chakra every time it’s cast.

This skill deals massive damage to the monsters, and they can’t kick it back towards players, so it’s safe to use it here. And it doesn’t cost chakra to use.
EDIT: Now monsters can throw back the Bomb at us, so be careful.

This is another good additional attack to be used here as the monsters have no chakra, so the skill will eat a large proportion of their hp every turn.

This is also another good additional attack as the poison damage is proportional to the monsters’ hp, so they will take a good amount of damage every turn.

This skill prevents you from taking any damage from the monsters. This is good when used against high speed/high damage monsters.

This is another good skill to prevent you from taking any damage from the monsters.

This skill gives you chance to counter the monsters’ attack, causing their turn to be wasted and prevents damage to your character.

This skill also functions as a counter, to prevent the monsters from attacking you, hence wasting their turn.
EDIT: Only use against bosses that can put debuffs on you.

This skill is still debatable, however it might be your life saver in early death scenario (if you died early and didn’t manage to cast any of your main skills).

Boss Strategy
You will fight a boss (an Espada) at every 10 floors. Unlike the other monsters, their stats and skills are rather fixed. The good thing is that you can rearrange your skills before fighting them.

This is a very easy boss, you shouldn’t have too much difficulty killing it.

The first Espada that you will encounter. He can be considered as partial speedster, so use skills that can counter it.
Skill set: Great Mud River, The Eight Inner Gates Released

Another partial speedster Espada, with lifesteal this time. You can use the same counter skills against it.
Skill set: Assassinate, The Eight Inner Gates Released

This Espada guards the inner cloister of Las Noches. He deals quite a bit of damage plus he can eat your chakra up. You can try to overpower him with speed.
Skill set: Chakra Blade, Fireball

This boss is yet another partial speedster, with more damage this time. Using the counter skills can start to get harder here.
Skill set: Quickstep, Gale Palm, Snared, The Eight Inner Gates Released

This boss is difficult for the fact that he deals massive amount of damage (which can 2-hit-ko most players). His skill set is rather annoying as well. Best bet is to take him down fast before he kills you.
Skill set: Mystical Palm Technique, Thunderfall, Prayer, The Eight Inner Gates Released

Compared to the previous boss, this one is slightly easier, although his speedster build might still catch you off guard.
Skill set: Great Mud River, Quickstep, Snared, The Eight Inner Gates Released

This is a tougher version of the previous boss. His health pool is also huge, coupled with deadly speed and attack. You need all your luck in defeating him.
Skill set: Assassinate, Prayer, Tailed, Beast Heart, The Eight Inner Gates Released

This is the final boss before you enter Karakura. You need everything you’ve got up to this far in order to defeat him