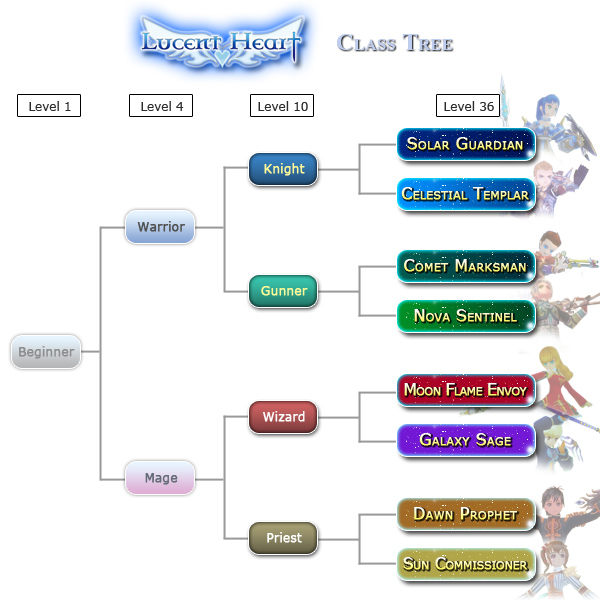 Solar Guardian
Solar Guardians possess the most powerful versions of single and multi-target taunts and the highest constitution among the classes. With a powerful array of offensive abilities that attack multiple targets, slow the movement speed of enemies and increases critical hit chance upon targets, Solar Guardians make great tanks as well as melee damage dealers.

• Blade Dance: Inflicts Damage on up to 4 targets surrounding the Solar Guardian, ignoring their armor. Additional damage is dealt with targets are below 30% health.
• Onslaught: Charge a target, dealing damage and stunning it. While your target is stunned your chance to land a critical hit will be greatly increased.

Solar Guardians enjoy charging into the thick of a fight and wearing resilient heavy armor. They can choose to wield either the traditional sword and shield or large two-handed swords.

Celestial Templar
Celestial Templars wear heavy armor along with the unique defensive “Gun-Shield” specific to the class. The Gun-Shield not only provides the protection gained from equipping traditional shields, it also serves as a built-in cannon, firing various types of artillery in battle. Although their constitution is not as high as their counterpart, Templars have the ability to reduce their opponents’ attack power and provide protection bonuses for themselves and their teammates to make up the difference. Celestial Templars can promote one spellcaster, melee, and ranged teammate to the Specialist rank, further improving their abilities.

Celestial Templars are ideal for players who enjoy the responsibility that comes with being a leader. Their unique Gun Shield provides defense as well as offensive capability unique to the class.

Comet Marksman
The Comet Marksman is the pinnacle of sniper training when taking the Gunner path. As Comet Marksmen train in more deadly versions of gunner skills they gain access to a variety of new shot types. By studying opponents from afar, Comet Marksmen have unique insight into vulnerable points in enemy armor. They have also perfected the ability to fire off quick and accurate shots that synergize with stun skills.

• Suppressive Shot: A shot designed to silence a caster from completing his or her spell. Prevents casting for a short duration.
• Sonic Boom: At the cost of additional ammo, fires a loud disorienting shot at multiple targets.

Comet Marksmen are ideal for players who prefer to be quick with light armor and possess high single target ranged damage.

• Flash Bang Grenade: Throw a grenade that explodes causing up to 3 enemies to be disoriented.
• Deadly Aim: Increase weapon range and inflict damage that ignores enemy armor.
Nova sentinels are ideal for players who favor light armor and ranged combat while providing leadership to their groups in battle.

• Psyche’s Healing Embrace: Fully restore a teammates HP or your own health.
• Divine Judgment: Marks a target. After 21 seconds, judgment is rendered upon your enemy inflicting massive Water damage.

The Sun Commissioner is ideal for taking on the role of main team healer and supporting their allies in combat.

Dawn Prophet
The Dawn Prophet is an option for players following the Priest path which focuses on a combination of healing support and offensive debuffs. The Dawn Prophet gains access to new healing over time spells in addition to higher ranks of their heal spells. They also possess offensive Omen spells designed to cripple their enemy’s skills and the ability to mitigate damage. Other abilities include increasing health regeneration and resurrecting fallen teammates while in the midst of combat.

• Omen of Destruction: A destructive attack that deals Fire damage to an enemy and reduces Water defense.
• Shock of Vitality: Electrify a teammate. If their health is greater than 40% the player will take Wind Damage. If their health is lower than 40%, the shock will cause damage and restore a large portion of that player’s health.

Dawn Prophets are ideal for players who enjoy supporting their allies in battle while crippling the effectiveness of their enemies.

Moon Flame Envoy
Wizards who focus their training on the destructive powers of Fire and Water take the path of Moon Flame Envoys. The Moon Flame Envoy has access to the most powerful area of effect magic spells that the elements of Fire and Water have to offer. With the ability to teleport into the middle of a battle, they will often surround themselves with enemies in order to stun them into place and unleash their Elemental powers. They also have the ability to put targets to sleep and disable mechanical monsters.

• Moonflame: A powerful streak of fire that deals damage against single targets and reduces their Water Defense.
• Arctic Blast: Summons a massive Ice Storm at a targeted location dealing damage to up to 6 targets in the area.

The Moon Flame Envoy is an ideal magical class with a variety of single target spells and flashy area of effect spells.

Galaxy Sage
The Galaxy Sage is one of two path choices when selecting the Wizard path. Galaxy Sages focus their training on Wind and Earth, using abilities in unison as a deadly force against single and multiple targets.

Galaxy Sages provide unique stat bonuses to surrounding teammates and have the ability to restore an ally’s MP at the cost of their own.

• Nebula Explosion: Grants infinite mana to the caster and increased casting speed for a limited time.
• Athena’s Spear: A destructive wind spell that deals heavy damage against a single opponent.

Credits to: Markas and
FreeMMOStation & Aweryn who showed Memento this info