Alot of people have been asking question about these, and since I’ve been playing around with it lately, I’ll answer some of the basic questions.

Note: PLEASE DO NOT ASK HOW MUCH CERTAIN MAGIC SEALED EQUIPS WILL SELL FOR, THIS TOPIC ISN’T THE PLACE FOR THAT. If you have question about magic sealed effects though, I’ll/other people will try and answer your questions.

Are they better than uniques/sets/legacy/c2/c3?
In some cases for certain class, perhaps, mostly because a magic seal equipment can stack certain stats such as int, int aura with magic critical in just 1 armor, and they CAN be cursed as well, and with enchants on it, you can stack up to crazy amount of stats.

So how do I use these?
Go to Seria and select “break magic seal” for a small fee. When you break the seal, you will get either 1, 2, or rarely 3 effects on your magic sealed gear.
Note:you can’t get the same skill on the same equipment twice, no matter how much you try.
EX: Int A with Int B on the same equip is not possible.

Eww…I don’t want magic crit on my WM!
Don’t worry, that’s what the third option, “convert magic seal” is for. Let’s say your magic seal equipment has mag critical B on it, and you do not want it. Simply choose that effect and you can reroll it as many times as you want.
NOTE: for magic seal that has more than 1 effect, keep in mind you can only choose ONE effect to reroll, and the other effects are permanently “lock”, meaning you can NEVER reroll them, so think carefully.

What are these A, B, and Cs on these skills stand for?
Ranking C as the lowest, S is the highest rank you can roll/get, HOWEVER, keep in mind that these stats has a HUGE range. Also, there are certain stats that do not have ranks, but their stats still varies.
Ex: Mage = any mage skill, but can be literally any skill of ANY mage class, etc.

Cool! I’m going to stack *insert certain skill* on every one of my magic sealed equips!
Unfortunately, you can’t, certain pieces of equipment has a range of effects that you can roll, meaning you can never get skill + on your armor, etc. For which effects are available on which armor, there is a chart on arad wikia, but I feel too lazy to translate it.

My magic seal equip still sucks! what do I do now?
This is what the second option, “recast magic seal” does. Basically you bind two BROKEN magic sealed equips to create a new one, but within the range of options it offers, such as mage weapon, slayer weapon, etc.
NOTE: keep in mind the lv result is very different than how bind sphere works, I’ve bind many lv60 with lv70, and got 60, 65, and 70, they seem to be very random. Also, how many effects on the magic seal equips you already bind does not matter to the result. Getting 1, 2, 3 effects is completely random as well.

I got the stats I wanted, but it’s only a C! I don’t want to reroll a million times, what do I do?
The smart thing nexon did, is adding a second function to kaleido boxes. Now, you can choose ANY effects on your magic sealed equips and reroll their ranks. This promotes spending NX on them since they are pretty cheap now.

Can the aura effects be stacked?
The answer is yes. Say if you have a Pixie C on a bottom and a Pixie B on top, you add whatever the value of intelligence given by the aura together, and this is how much int you will get in dungeon. Note that however, each aura will retain its own range, meaning that your party members/summons may get different value of int depending on how close they are to you.
EX: if one is 300px, and another is 200px, then your summons/party will have to stand next to you within 200xp to get both aura, they’ll only get 1 if they went beyond 200px.

So what does each effect name do? 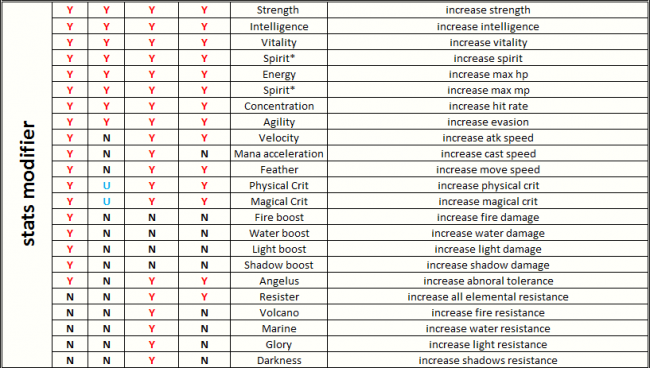 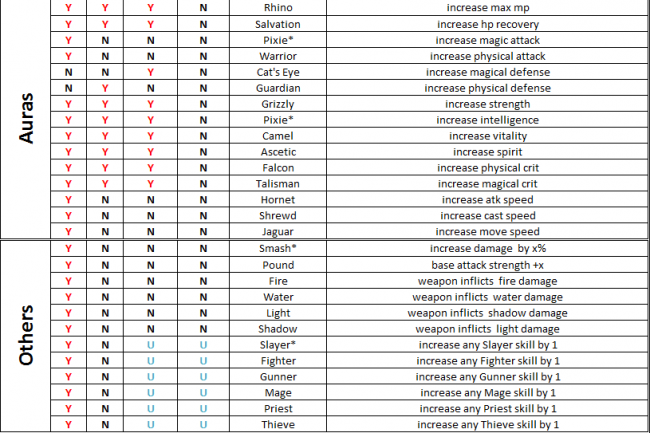 Note:
Names with * means Nexon screwed up and made them the same name.
“U” means that arad wikia stated that they’re not if certain accessories can have skills on them, physical/magical critical stats can only be rolled on shoulders.
Any weapon that has any elemental damage can ONLY be gotten through rolling from Seria, you can NEVER get it from breaking a seal.