From what I see, some people struggle after a while when they reach around 80k population or so and they get stuck with no demand for RCI (Residential, commercial, industrial) so I have decided to make a guide to help you make your dream huge city, at the time I posted this the city has already grown to 260k population and rising. Note you should at least have a good/working economy and some money stashed up (preferably somewhere around 20k profit/week, if you try doing this with a brand new city I have no guarantee your city will even live pass the 3rd year.

So here is my city 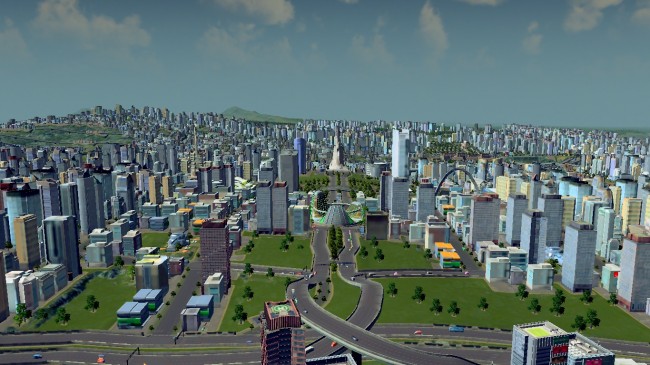 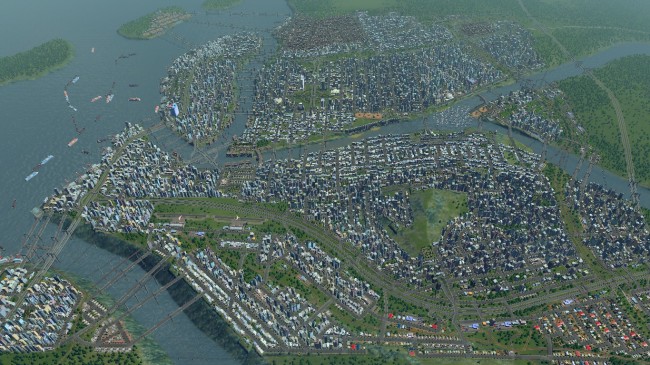 With Tax relief on high density buildings, even with no demand there will be 1 building sprouting up every 5 mins or so, meaning lots of afk time while waiting for them to appear.

Not going to lie, this step hurt my feelings as I want my citizens to be all miniature Einsteins, but people with lower education levels tend to produce more babies which = positive birth rate= more people = housing demand. Also they can help out in the industry which requires a lot of low/no education level people to run them ( I had industries with 16/16 workers all being university graduates, all over educated for their job, yeah too smart ) 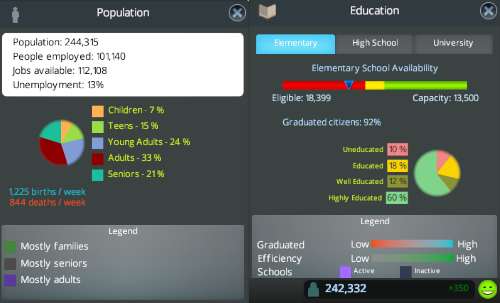 probably a link somewhere there ^

With a huge population, people die, and not one or two, like A LOT OF THEM, basically you NEED to stack like 8 crematoriums next to each other in order for them to pick up the dead bodies to prevent your buildings from becoming abandoned, I had like 50-70 crematoriums all spread out over the city, of course investing in good healthcare is important to prevent your people from dying which helps the problem too. This applies to incineration plants and ( example at the bottom right of the pic or the middle, #Crematorium #Industrialisation) 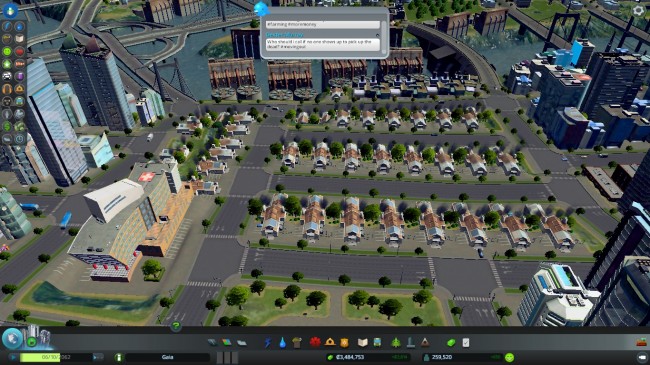 With a huge city comes with huge responsibilities and I suffered HORRIBLE traffic, basically there were lines of vehicles like 8 blocks long, so in order to fix it what you do is:

FIRST- See where most of the vehicles are going
SECOND- Build Highways/1 way roads, also try to aim for there being at most a T junction on a busy road, cross junctions have massive jams.
THIRD- make sure that there are places for cars to filter out, some vehicles want to reach A while others B so having different routes for them to take helps to reduce jam.

This step is important as it affects EVERYTHING, your industries will suffer lack of materials, lack of goods reaching commercials and most importantly, HEARSES CAN’T REACH DEAD PEOPLE. All of which causes abandoned buildings, or burnt down ones in the case of a fire. Also only use LARGE ROADS, unless it’s a tiny outskirts with only offices, LARGE ROADS, important, also all my roads have trees increasing land value thus allowing easy level ups for buildings, sound barriers on highways are important too.

5) Save up before doing the above

By doing this, your income will PLUMMET HARD, since most of my income comes from high density residential, it caused me to make a huge loss in profits, luckily I already had a working industry+commercial and had park boost, fire alarms, education and many more which i could disable, I recommend building your city with those activated as it gives you a sort of “emergency fund” which you can disable to bring you back into the green should you find yourself in an economic spiral of doom.

I basically left the game on when I was making a huge profit of 20k/week and saved up till I had 3 million or so. To give you an idea how important this step is, when I set all the high density building types and offices to have relief, I was making a loss of 200k/week, yeah. You might want to set only 1 building type with relief at a time. 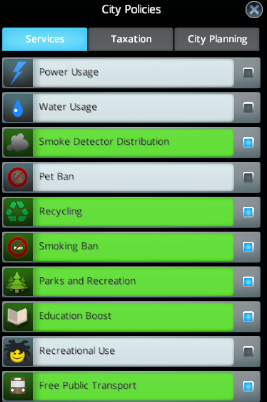 I used these policies for my city, deactivating smoke, recycling and education when I need money. You can also increase taxes up till around 11% before people start complaining with tax raise on, or 12% without it, its important to see whether they complain about too high taxes as it leads to abandoned buildings. 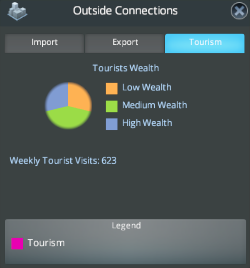 I don’t think tourism is that useful for making money, but if your city manages to live off tourism let me know.

Well that’s all the tips I can think of for now, I’ll try to give more tips after I see what worked, not easy remembering what works as it seems like a natural thing to do.

– If you want monuments and such, work towards them early on in the game, later on if you try doing those like oppression centre with 50% unemployment rate of higher, its impossible and your economy will crash and burn.

– Do NOT, and I mean DO NOT build dams up stream near your coast if you have important buildings there, it will flood your entire coastline, dams aren’t really useful anyway as they make about 30-50 MW while the solar power plant makes 160 MW. Early on in game its simply a huge cash sink and isn’t useful compared to large roads/bridges.

– I still have no idea how to fix the lack of raw materials problem, and there’s a ship going in circles on land and into the buildings O_O

– So far I’m still getting more population, maybe I’ll get up to 1 million XD