Overview:
Egypt is one of the most popular maps because of the simplicity and elegance of its design. While the close proximity of the spawn points makes the match largely close quarter combat (CQC), the variance in levels lets players choose their styles of combat at their own discretion. M4ing and AWMing are very real possibilities, as the legions of SMGers and AKers who scamper among the pillars present tantalizing targets. Smart players can very easily dictate the flow of the game on this map by sticking to their strong suits or exploiting the enemy’s weaknesses.

Understanding “Lanes”:
Unlike SnD and other modes, TDM has a continuous respawn feature that makes your enemies attack in waves. You lose the luxury of not having to worry about someone after you’ve dropped them and, instead at some points, it feels like the entire enemy team is gunning for you. Blindside and back reap kills are much more common in TDM because of the pandemonium of 16 people all trying to kill each other at once. By using lanes, we can effective break down the enemy team and isolate them for easy picks without having to worry about what is on our sides or behind us. I’ve outlined some effective lanes on Egypt and I’ll go over each one individually. Use the overview map to refer to proper placement; the circles indicate where the majority of enemy activity will be and thus those are the lanes you need to worry about in that position. 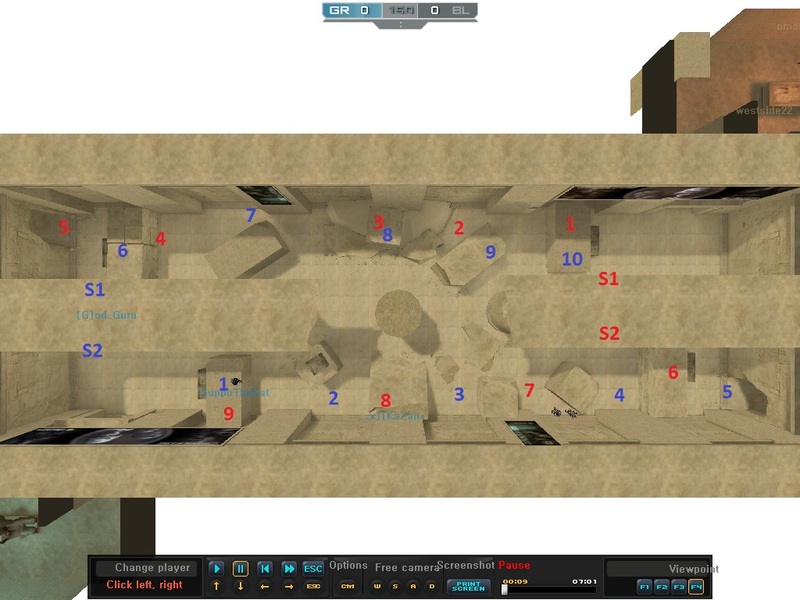 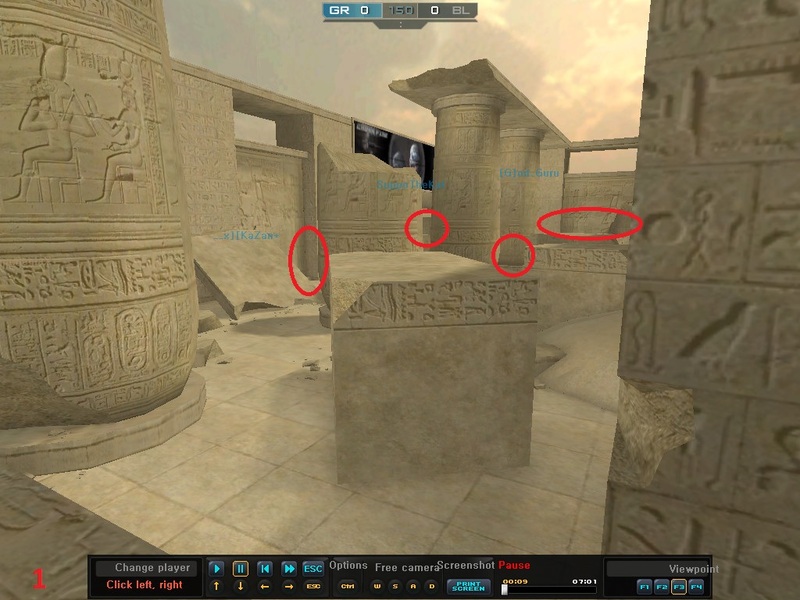 BL-1 overlooks a lot of the map and is a point that enables suppressing fire and long range picks. It is my personal favorite lane because it is elevated; making head shots and general vision easier and there is enough room to strafe. When in trouble or when you need to reload, all you have to do is jump backwards. The problem with BL-1 is in a game with 5+ players on the other team they tend to catch on pretty quick to what you are doing and a swarm of GR from multiple directions can dispatch you quickly. After being forced out of BL-1 or during a push to secure a more advanced position, you will come to BL-2. BL-2 is not a lane you should stay in long as it catches a lot of grenades that miss BL-1 and behind it. However, it’s a good lane to pick of someone at GR-1. It’s best to peek the slab (strafe so that on the left strafe your behind the slab next too you) with your cross-hairs focused on GR-1 and stay wary of a surprise attack from GR-8. From BL-2 you can transition to BL-3, an elevated position that gives a good vantage point to camp the GR teams spawn. The problem with this lane is that it is exposed to counter fire and the slab that your standing on is not big enough to strafe effectively. It’s good for picking up one or two kills then jumping back behind the slab or pushing through to BL-4. It’s also handy for picking annoy snipers at GR-6 and GR-S2 and clearing GR-7 on the push through to BL-4. 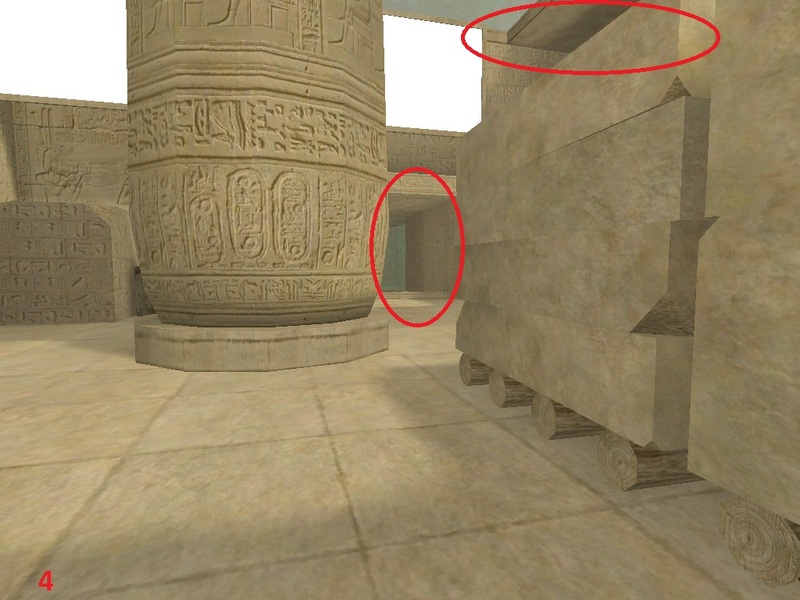 BL-4 is a peeking position that has a direct lane to the mouth of the GR spawn. This position can be used to pick people coming out who are focused on BL-3 and you’ll often catch people with nades up. It is very easy to get picked here as sometimes the GR will still have their three second spawn shield up making them impossible to take down. 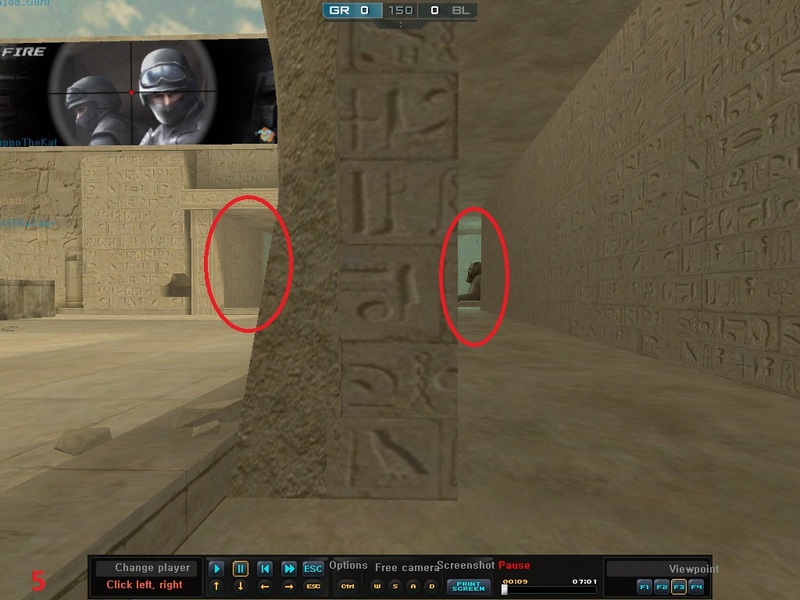 After clearing the mouth of GR spawn from BL-4, you can proceed to take the more defensible position of BL-5 (you can also just jump over the top from the adjacent slab). You can easily snag 2-3 kills from this position before the enemy gets wise and begins to nade you. For added fun, you sometimes pick idlers or gun-swapper. To the left of the position there is an indent in between the far wall from the GR spawn and GR-6. This is a good place to peek from, dodged grenades and, on the GR side only, escape from as the ledge juts out enough for you to jump onto it. 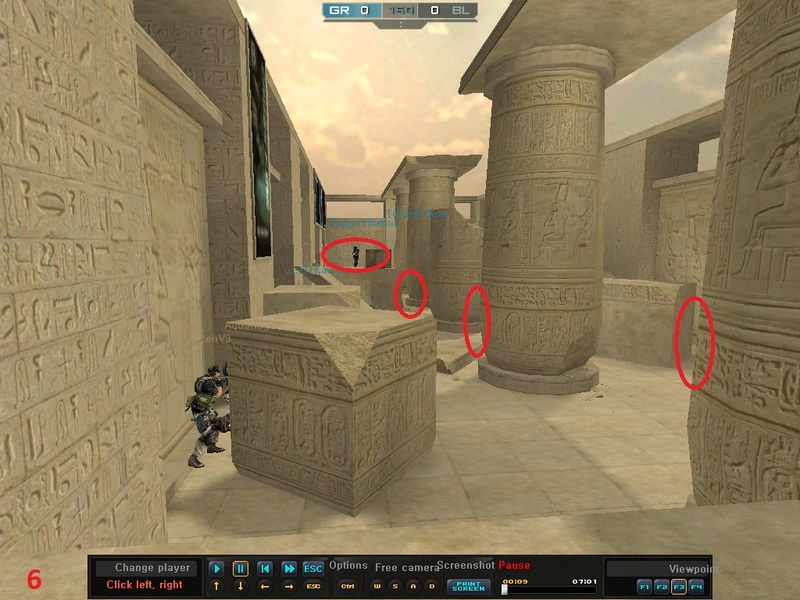 BL-6 is the slab opposite the entrance to BL spawn. It’s much like BL-1 but it interacts more with GR-1 and can be used to flush out rushing on your BL-2 and at GR-4. 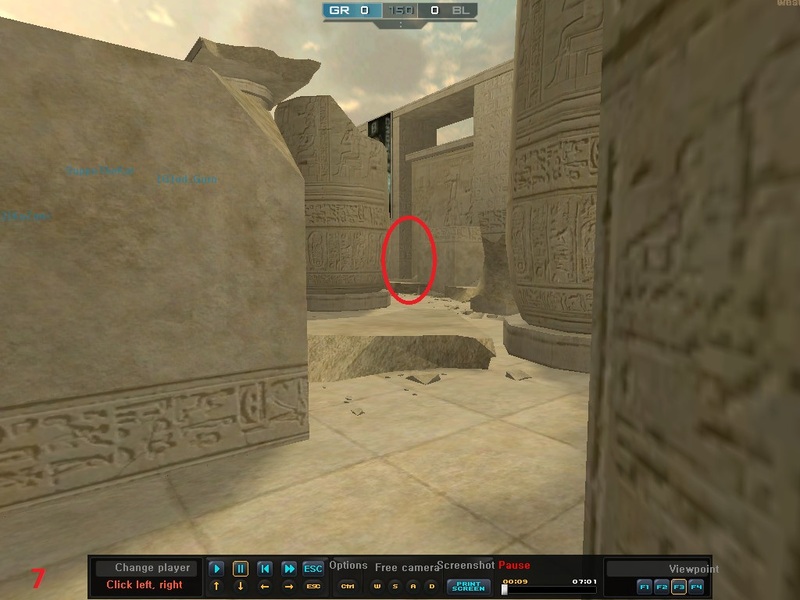 BL-7’s primary lane is the enemies who move through GR-6 through GR-7 and the n00bs who rush the middle of the map. This is a position that is fine to camp as it is defensive enough to minimize damage (provided you can pick GR-7 before they pick you) and is positioned excellently to demolish SMG rushers through mid or BL-2. 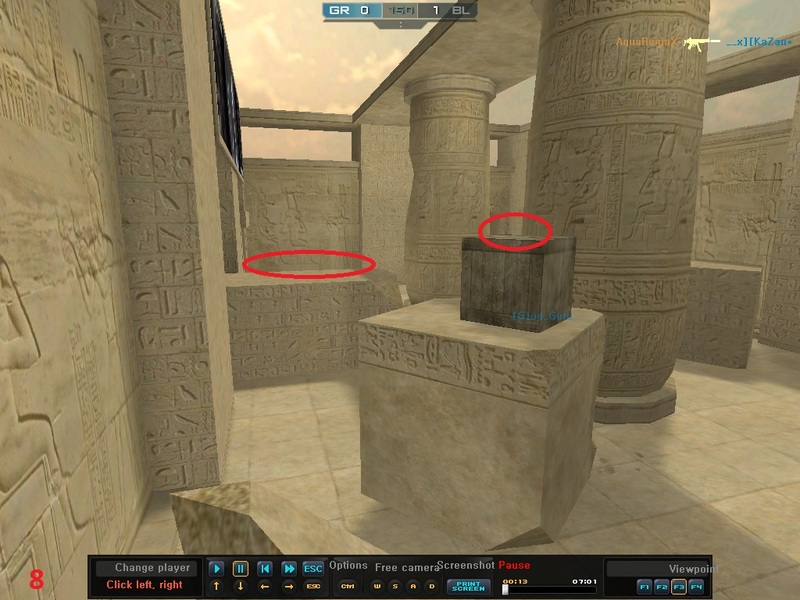 BL-8 is one of the best positions on the map. It has a very narrow overlook of the area in front of GR spawn and a skilled gunman can easily pick the heads of enemies that come running out. It also can hit guys that jump over and take position at GR-6. It is also easy to retreat as the angled plane makes strafing possible, but still rather difficult. 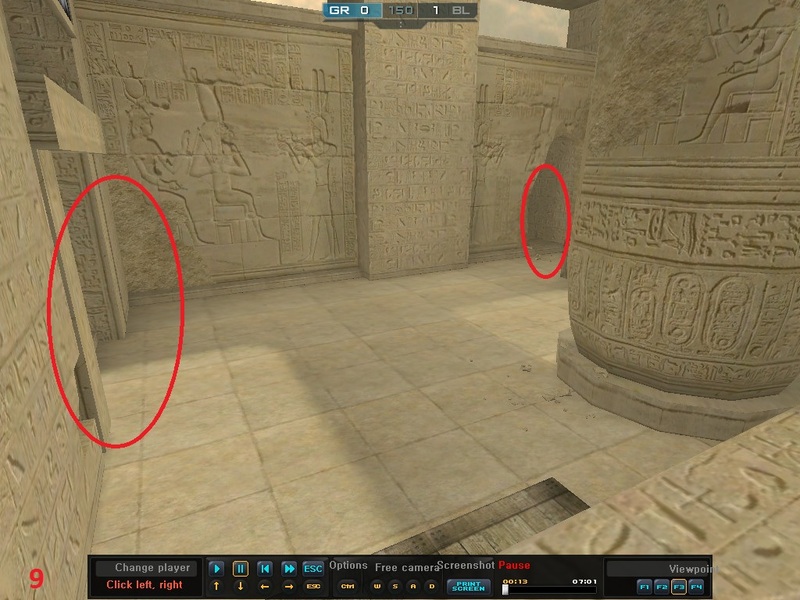 If you manage to take position at BL-9, the GR will hate you. Usually, they will come running out of both outlets from the spawn holding grenades or too distracted by BL at BL-3 or 4 to even notice you. Sitting here with an AK feels like cheating. 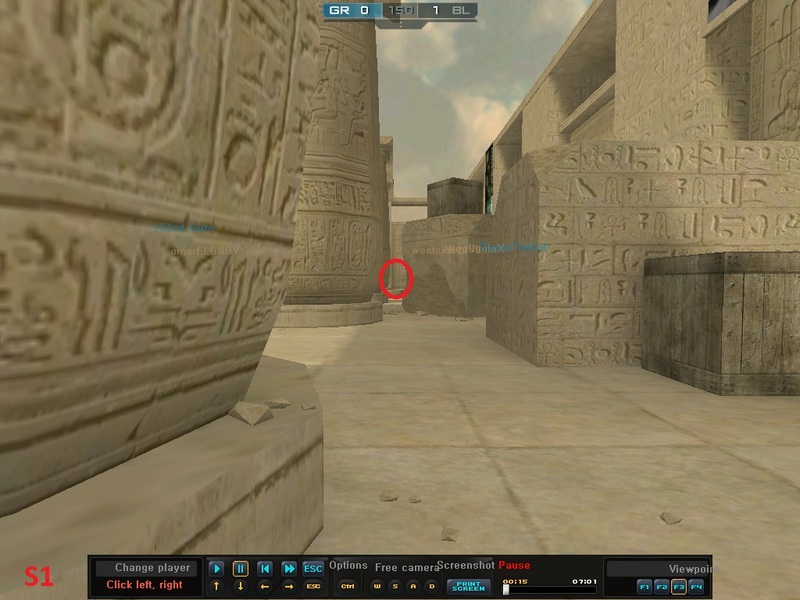 BL-S1 is a good position for snipers and riflers with quick reflexes. It is common for snipers to switch between this position and BL-1 to bait and pick opposing snipers or riflers at GR-S1 or 6. 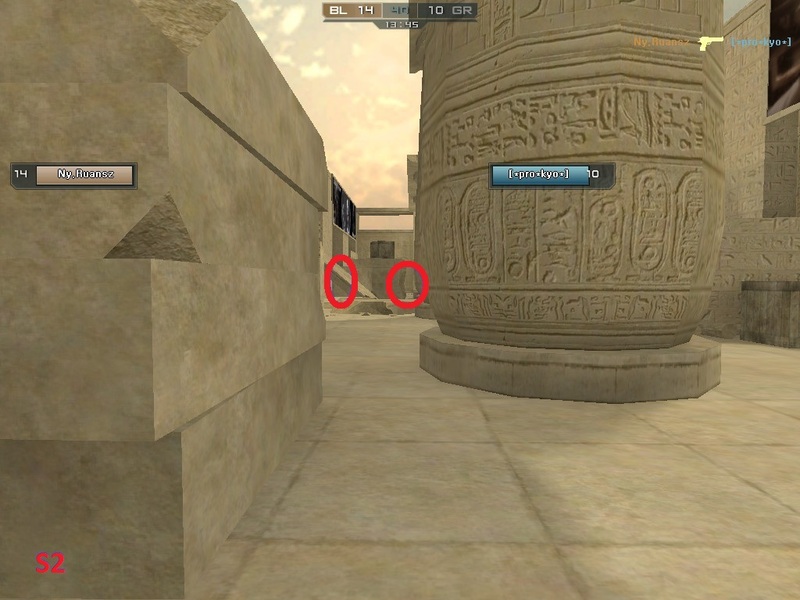 BL-S2 is the best sniping position on the map as almost all of GR-1 and 2 is exposed. 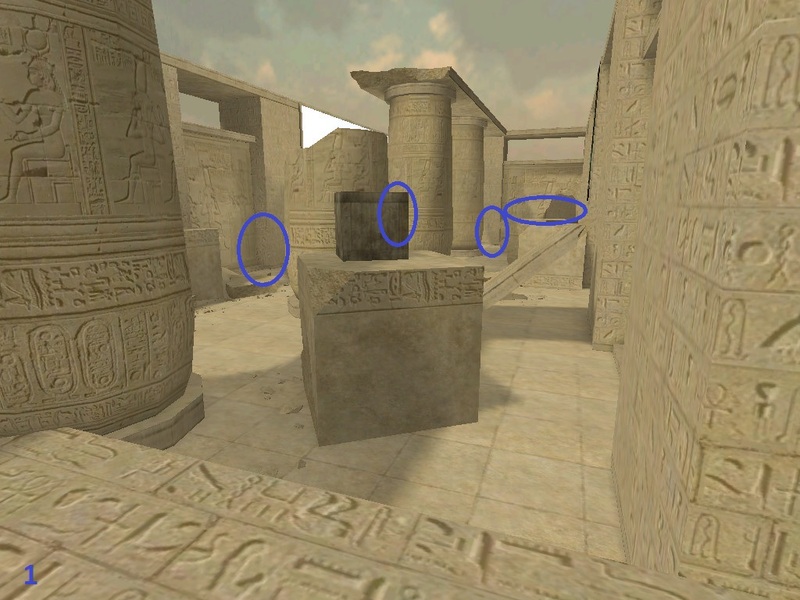 GR-1 is almost identical to BL-1 except for the slanted plane at GR-2 vs. the slab at BL-3. 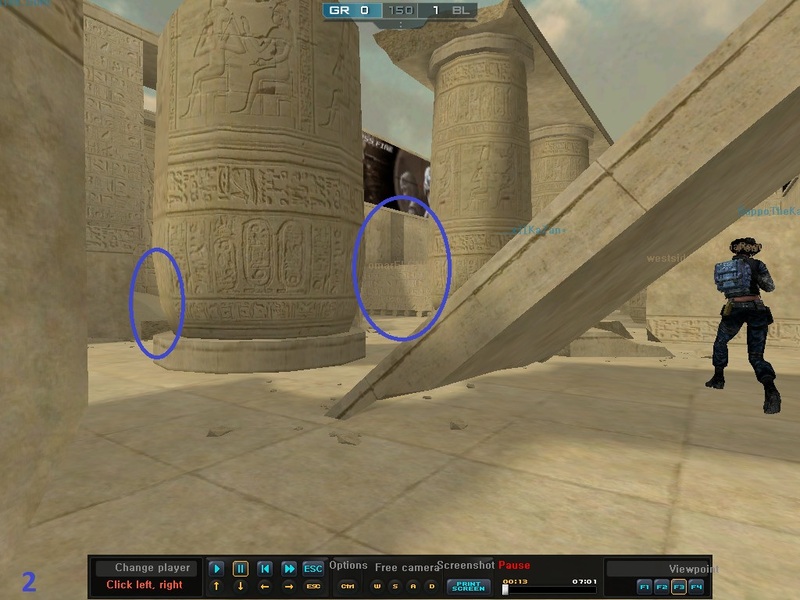 GR-2 is a lot like BL-2 but the slanted plane directly in front of the position can be used for cover from a counter attack from BL-1. It can also hit pushers from BL-2 to BL-3. 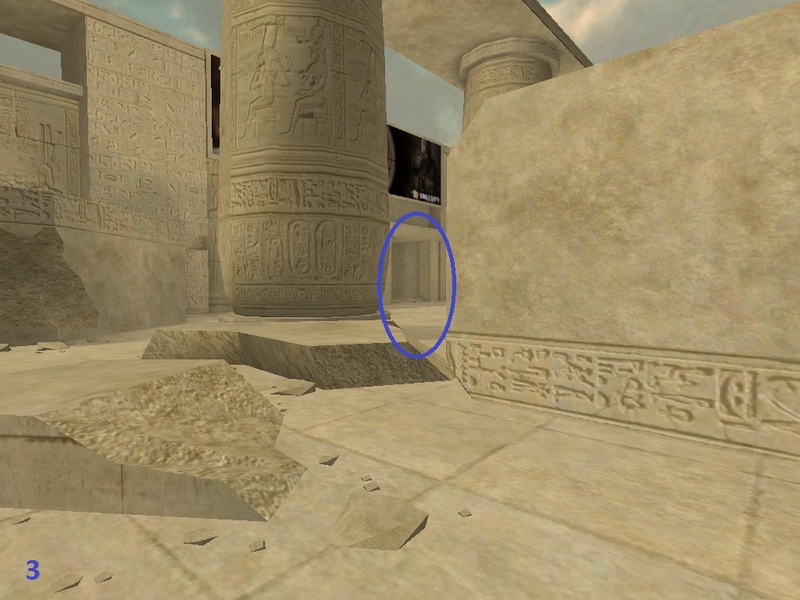 GR-3 has a direct lane to BL spawn entrance and a corner to the right that you can tuck behind and peek out from. An alternate position for this lane is on top of the slanted plane. This position exposes you to more of the map but is useful for assaulting BL-6 and BL-7. 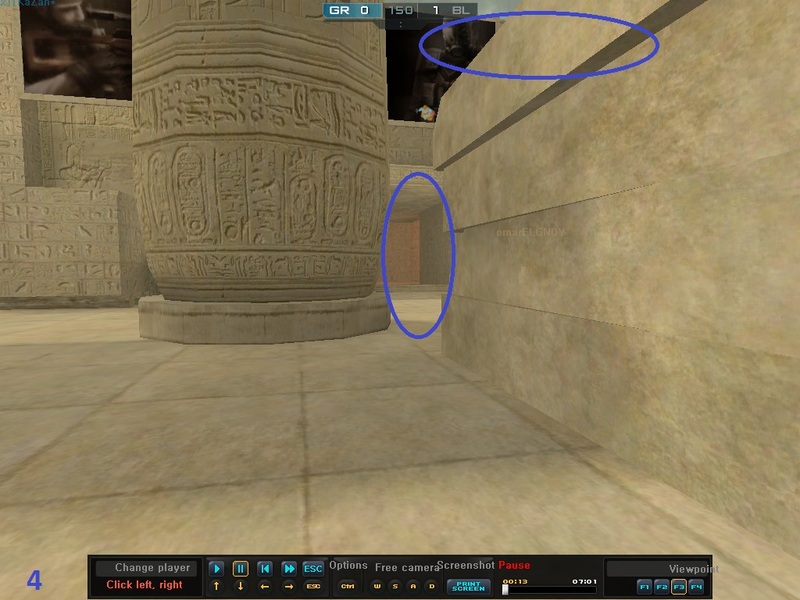 GR-4 is identical to BL-4: a lane into BL entrance. 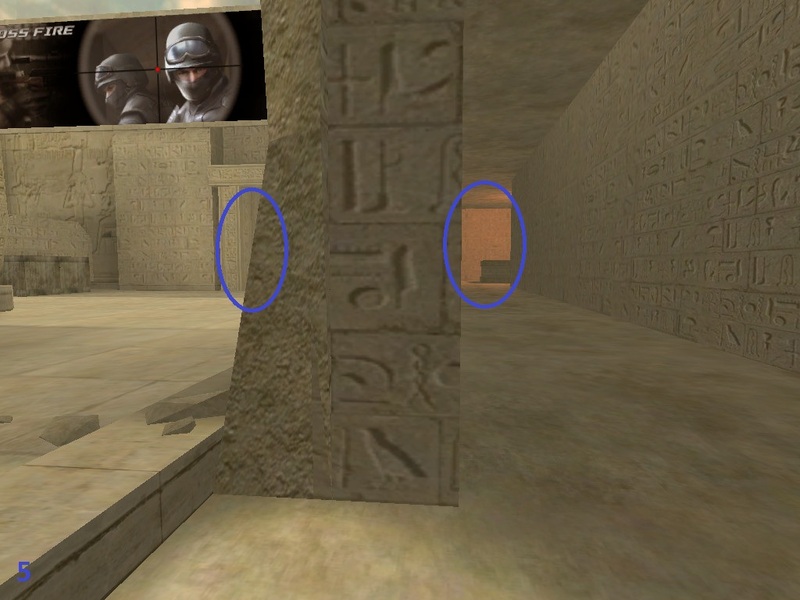 From the position at GR-6, it is easy to suppress enemies going from BL-1 to 2. Also, BL advancing from BL-2 to mid or BL-3 or 4 do so with their heads exposed and can be punished by some well-placed shots. 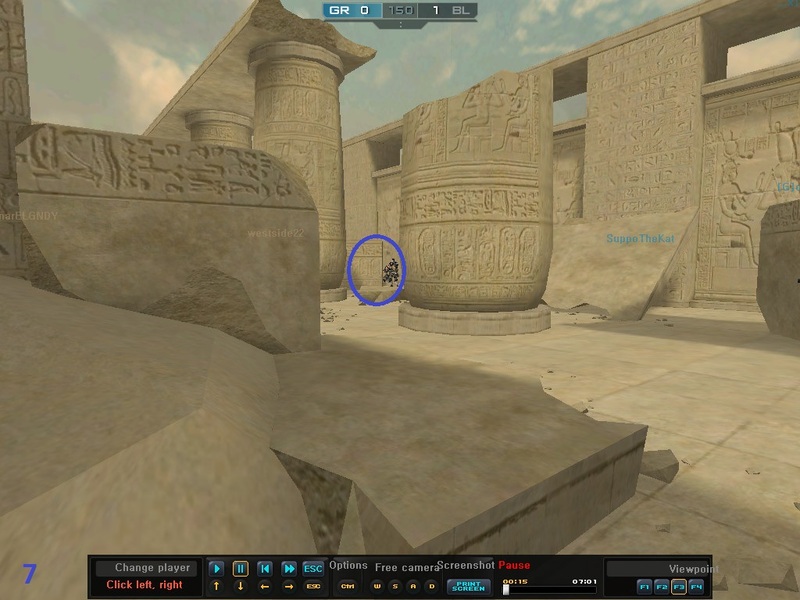 GR-7 is not as secure as BL-7 because of the constant threat of an attack from BL-3. However, it is a fine position to pick BL-7 and 8 while moving on to GR-8 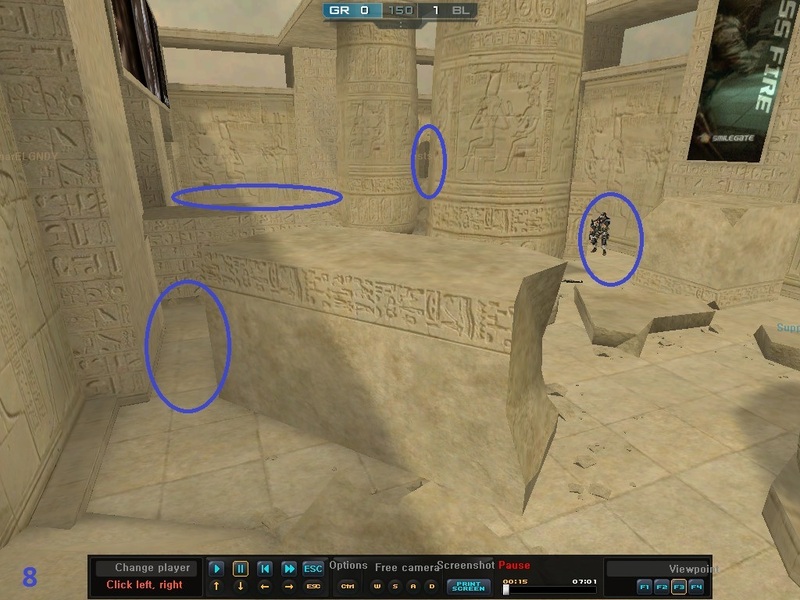 GR-8 is the same position as BL-3. It is useful for ambushing BL-1, 2 and 3 as well as picking people coming out of the BL entrance. From here, moving on to GR-9 and GR-10 is fairly easy. GR-9 is a strong position that holds a protected lane over the BL entrance. This position is very exposed to a tandem BL-1 and 6 push so taking picks and advancing to GR-10 or falling back to GR-8 or even GR-2 is advisable. 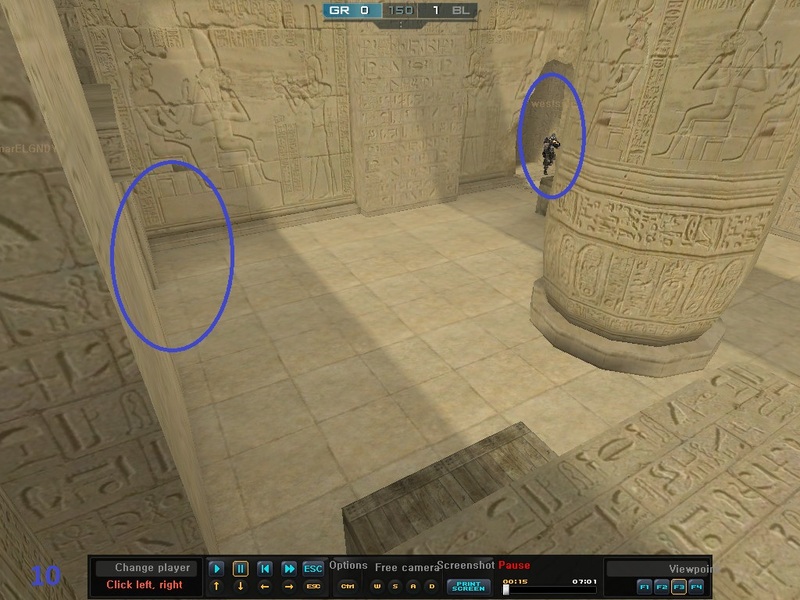 GR-10 is the same position as BL-9 but is slightly more accessible by jumping. 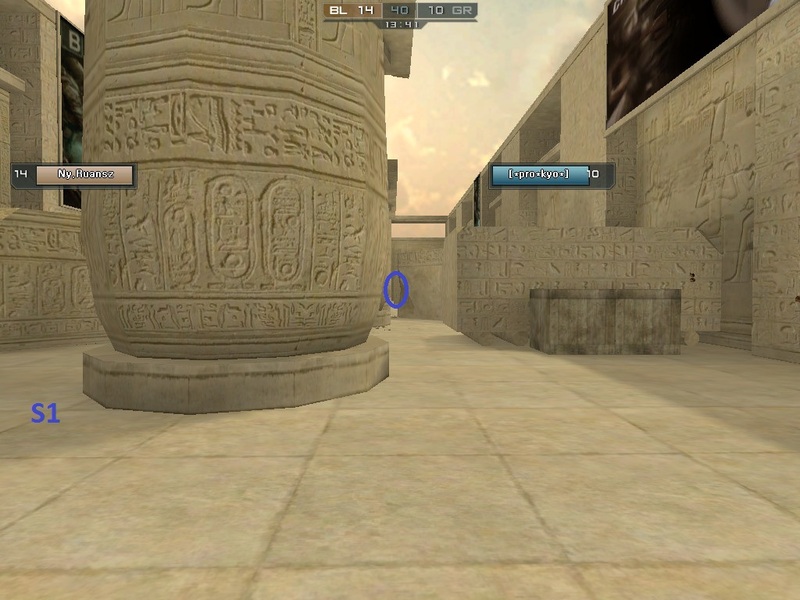 I accidentally switched GR-S1 and S2 on the overview map, GR-S1 is the sniper spot next to GR-1 and plays similarly to BL-S1 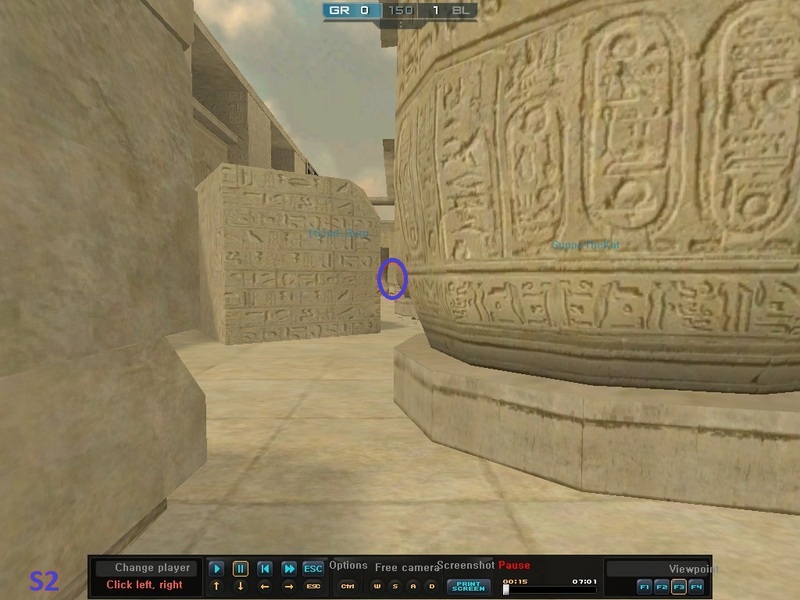 GR-S2 is unfortunately not as good as its counterpart though is still an excellent sniper spot that plays like the rest of them.

Final Thoughts:
Egypt is a great map to practice different types of play, from CQC to long range, from one shotting to spray control. You’ll notice that I did not give any positions in the center of the map. This is because if you are playing lanes, you want to minimize contact with the enemy.