The Stratagems Battle Guide by Delilah

Be a Master of War!
Intro:
Congratulations on building your city enough to go into battle! At this point you will be able to seize or plunder cities. You can gain resources, gold, reputation, honor, officer experience, alliance experience, and at times mission items such as berets and bulletproof vests. The following is a step by step guide to battle success for new players. A general rule all high ranking members must follow is “Persistence Despite Set Backs”. Just as you attack others, you will be attacked; yet, those who are in this for the long haul are at an advantage: patience always pays.
Troops and city defenses:
Following is a graph showing the damage potential for each type of troop vs ground, fort, air, and navy troops*.
This can be used as a quick reference as to which troops can best annihilate your opposition. Sending out scout planes and having a high level of reconnaissance research levels will give you information as to what and how many troops and defenses your opposition has. Following is a table showing the abilities and attack of city defenses (wall, bunker, howitzer, AT gun, AA gun)*.
War Declaration:
Once your troops and defenses are built up you may begin to declare war upon other players. Choosing players to attack near your city has great advantages: less oil usage, less transport time, etc. Also, you must consider the player’s reputation; you are not able to attack players with too much less rep than yourself.
Once you’ve chosen a city to attack, you can declare war on them. If the alliance you belong to is at war with their alliance, you can attack right away without having to wait. However, if they are not in an alliance or if their alliance is not associated with your own, you must declare war. If you belong to opposing powers (they belong axis and you are an allies or vice versa) either of you can attack in 4 hours and war status (during this you can attack each other) lasts 48 hours. If you belong to the same power (both either allies or axis) your battle begins in 8 hours and ends in 24 hours.
Seizing vs. Plundering:
Now you’re ready to attack! You can choose either to seize or plunder. When you plunder you don’t need to fight the defenses, however you don’t receive gold. If you successfully seize a resource field it becomes yours and provides you with a percentage of resources and the option to ransack, which gives you jewels.
Fields vs. NPC cities:
When deciding which to seize, many things must be considered. Any level resource field can be scouted without a problem, however, NPC fields are nearly impossible to scout because the opposition will shoot down your planes. Thus, when attacking an NPC city you must evaluate your troops extensively. One large difference is that resource fields will usually only have a few kinds of troops whereas even a level 1 NPC city will have at least a few of almost every type of troop. The gains also differ; winning an attack against an NPC city rewards far more reputation, officer experience, and even sometimes mission items. However, there is a limit as to the quantity of resources you receive (depends on the level), for example, maximum resources received from a level 1 NPC city is 10,000 of each.
Battle:
So now you’re in battle! Once your troops are dispatched you can see their status in the intelligence tab, under troop status. Here you can see how long until your troops arrive to their destination. Once the battle commences, an alarm will sound. Now you can command your troops. You can order them to go forward, standby, or retreat. The sand table will show you how far your troops can shoot and how close your enemy is. Keep your trucks on standby so they won’t get be destroyed and will be able to carry back resources. Also, keep you rockets on standby since they have very long range and can cause damage from far away. As you fight more battles you will become more experienced and learn how to handle your troops more efficiently. Consult the table showing troop attack vs. troop categories above if you are unsure of which troops are most effective against others. During battle you can also view the battle report, which details the damage dealt by both you and your opposition’s troops.
Once your battle is over, you can see the results in general intelligence, the message will be titled “seize report”.
If you plundered or if your seize was unsuccessful, your troops will return automatically. If you successfully seized, your troops will remain garrisoning in your new field until recalled.
Personal Score/Honor Points:
These are rewarded during some battles; they are used in advanced game play.
HAPPY HUNTING!
*to joyfront staff: i have charts and bar graphs made up on microsoft word displaying the attacks of all troops vs each kind of troop ( infantry vs ground, fort, air, navy; truck vs ground, fort, air, navy; etc)
server name: S-17
commander name: Blue Sniper 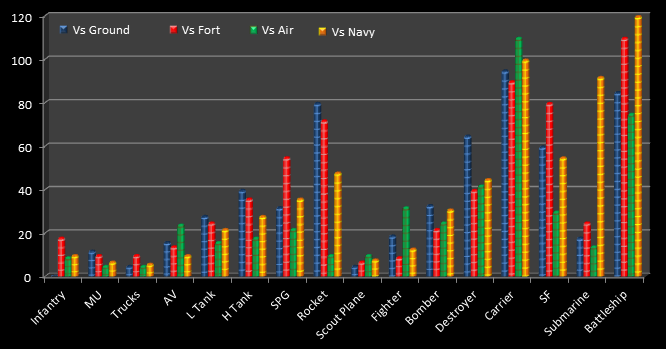 Above is the stratagems attack table I mentioned above, it clearly shows the difference in damage caused by each troop vs. ground, fort, air, and navy troops. I apologize for the blurriness; for some reason when I transfered the file here it copied very small and I had to stretch it out a bit. If I win I will be happy to provide a better, much larger copy of my chart.

Below is a bar graph showing the streangth of city defenses vs. each type of troop (ground, air, navy). Again, I apologize for the blurryness. 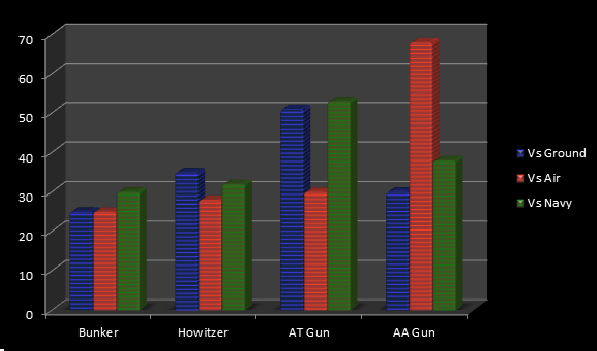 Thank you for viewing; hope this can be of some use to you,
Blue Sniper from S-17