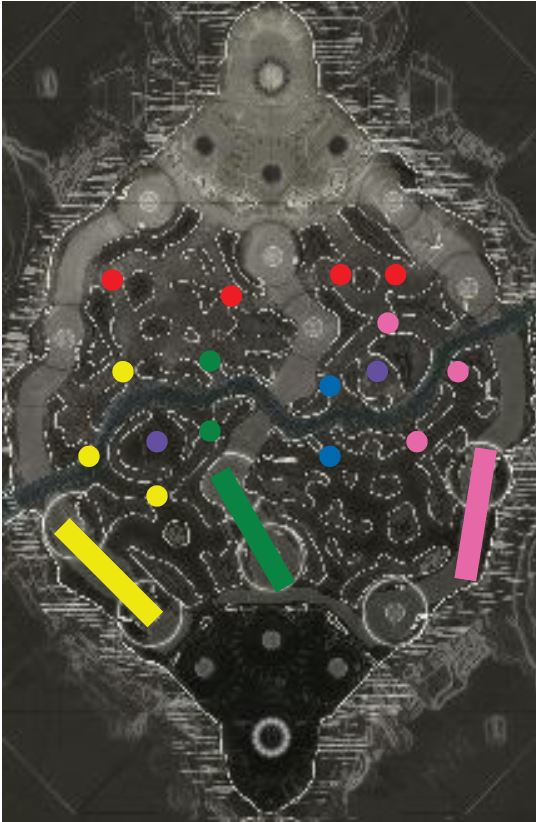 1. Wards are now line of sight, though when you place them it shows a radius, which means if you cannot see the ward it cannot see you.
2. Scouts wards ONLY see visible enemies and wards, so it will not see a shadow ward, nor a shadow walking kallari, nor an enemy that picked up the purple river buff (invis).
3. Wards are now on a timer, so it is important to de-ward enemy wards when you see them, it puts the enemy back an extra ward timer length and it ensures your ward will live longer (to reduce your down time between when a ward goes out and when your ward timer is back up).

To start, most if not all of your team should start with a scouts ward (ADC is an exception due to laning with a support). As seen in many of the high level tournaments on Monolith, there is over a minute of downtime before any minions spawn. You should check the river for a group of enemies looking to start a pre-minion fight. A scouts ward can do wonders prevent an early jungle gank as well (your jungler will love you).
Everyone’s first buy when they tp back to base should be a 3pt shadow ward of some kind. A shadow ward card should be kept all game and incorporated into your late game 60 cxp 6 card final build.

Your job is to stay alive and keep your tier one tower up as long as possible (without dying). Tip: let them push your lane all the way up to your tower (psst,this makes easy ganks for your teammates, two early kills, your jungler will love you) Sorry I got off topic.

You can help yourself by placing a ward near the closest enemy jungle entrance. This will reveal any enemy wards that protect their backdoor entrance, take those out. This area is a great spot for your mid laner and jungler to sneak behind your opposing laners and get those kills I was telling you about. Once your tier one tower goes down, your protected laning area shortens into your jungle. Ward your jungle at the first intersection, giving many lines of sight. Use your second ward to ward their jungle, similar to the first place I told you about. The ward in the enemy jungle entrance will also cover some of the river towards your shadow wall. Keep this in mind when placing wards “a bit of river, a bit of jungle, multiple passageways/intersections.”

Placing a ward in the river or right up against a shadow wall limits the wards possible lines of sight because it is jammed up against the wall, cutting half of your possibilities off.
You may notice once your tier one tower goes down that the opposing ADC and support roam the map more, use this opportunity to heavily push your lane (keeps them in your lane and not ganging up on your team mates). If the enemy laners don’t respond to your pushes then they will soon lose an inhibitor. Sorry, off topic again.

This one is important, like very important. Mid lane has 4 passageways into jungles and 6 shadow walls (plus the two between your tier one and two towers that an enemy could sneak in to get that last hit before you “safely” tp back).

Mid laner NEEDS to get a shadow ward as their first card back to base.

Mid lane has to pick two of the four intersections to ward. You should be communicating with your jungler on this as well because he is responsible for the other two intersections near mid lane.

You should also be communicating with your jungler for ganks and river buffs as well. Communication is a HUGE advantage on Monolith. Sorry, off topic again.

Mid laner covers left side intersections (yours and your enemies’) these should cover some of the river and some of the jungle (multiple paths) near the jungle shadow walls.
Jungler covers right side intersections (yours and your enemies’) because the jungler should be spending most of his time in the right jungle anyways (give off-laner access to the left jungle minions, they get bored all alone over there and it helps keep them fed instead of being poked out in a 2v1.)

Covering these intersections with wards ensures that you will see the enemy coming, whether it be from their jungle or from their outside lanes, this covers your jungle and the river.

By only placing wards in the river or at the river buffs you drastically cut down your line of sight and you are setting your jungler up to get invaded (this is not fun and it may not be the junglers fault, someone broke into his living room while he was eating a bag of cheetos on his recliner because you didnt lock the front door).

Please don’t be “that guy” who says that he doesn’t need wards because he is the jungler. You have areas to cover just like your hard working teammates. Everyone has to chip in on the rent and utilities to keep your house running smoothly.

The jungler should start on the right side, clear the white buffs, take the right river buff @ 3 mins and then group with the mid laner to look for ganks or recall back to base. Dang this isn’t a jungler guide, sorry back to the topic at hand.

You do not need to ward deep in your jungle if you and your team cover the intersections I have described above. It’s like having one of those annoying cars that the alarm goes off if you get too close to it. What’s the point of having cameras deep in your jungle if you didn’t see the break in attempt. Why do I want security cameras in my house to watch a burgler making a sandwich in my kitchen when I could have stopped him before he got in? Having these wards at the crutial intersections allows your teammates time to COLLAPSE on the enemy by the time he steps foot into your jungler, or into the river, etc. Why watch them suddenly appear in the river when you could’ve had the insight to gather your team and jump him as he is walking into the river alone.

Support should start with a scouts ward, place it right inside your jungle at that intersection to prevent enemies from backdooring you at your tier one tower. Also, keep a ward on the ledge at gold buff (opposite side of the fog wall), this is cover the river at your fog wall entrance to see if their jungler is waiting for you to push too far.
After first back, both the support and ADC should have shadow wards of some kind. You will be pushing the enemy tower early and often seeing as you are in the 2v1 lane. You should keep your backdoor warded, this helps keep you from getting ganked and it also covers the other entrance into the jungle that the jungler has not covered (helping you, your lane partner, the jungler, and the mid laner from getting ganked and invaded). You should also start to ward into the enemy jungle, seeing as you are pushing their tier one tower early. Continue to ward these locations because they are the backbone to keeping your entire team aware of all enemy movement.

The team is also responsible for warding raptors and OP. This seems like a great job for the support/ADC partners seeing as they have four wards and only two intersections to cover (twice as many wards as your other laners but the same amount of intersections as them). If your team has the advantage and is pushing up to their tier 2 towers or inhibitors, you should be split pushing as to split the enemy team up and ensure they do not all gang up on one side. Continue to ward these key intersections and once you push your advantage you can forego your jungle ward and use that one to ward deeper into the enemy jungle. This is an overwelming effect and it keeps the enemy on the defensive/reactive. Imagine warding your jungle to see 2 or 3 enemy wards in there. It hurts, and that will tilt most players. Once you get into their jungle you can see when their solo jungler is trying to safely farm camps and then “BOOM” your whole team collapses on him. Or you see a laner running through the jungle and “BOOM” your team collapses on him.

This has happened to myself, many a times.
I have been on both ends of this scenario.

It starts with team wards and covering intersections, if you don’t cover your intersections then you are setting your ENTIRE team at a disadvantage.
When the enemy sets a ward in the river, it’s in neutral territory, but your jungle ward catches it because it is in line of sight. Too bad for the enemy because in order to clear your ward they have to travel into your jungle, while you only have to travel into neutral territory to clear theirs. You will also have their jungle intersection warded, and you will see if they are going to collapse on you when you go for river buff or to clear their river wards.

Think about it, group up and give it a try.