When originally wrote this it’s was Saturday and with only two days left in Haderus campaign, I’m sitting at the number 5 spot about 250,000 Alliance Points behind our current Emperor. I most likely won’t catch up and I’m feeling tired and burnt out. But this experience has still been a success because now I have a better understanding on how to become Emperor. I want to explain some concepts on how you earn points needed for the crown first, how to setup a schedule that will work throughout the campaign, and finally outline two ways I see are the easiest to obtain the crown.

Stay Alive – The character I used for this experiment was Deltia, a Veteran Rank 14 Nord Dragonknight. Any class can get Emperor and each has strengths and weaknesses. Regardless of your class, you need to survive. My DK lacks speed so I augmented my build for quick get aways with Elusive Mist (Vampire Skill Line) and Retreating Maneuvers (Alliance War Assault Skill Line). This way I could escape with blazing speed. Another trick to staying alive is going in stealth as often as you can. Even if you don’t think it’s possible, try. I’m surprised at how many times I’ve stayed alive just going behind a tree, pillar, or something and stealthing.

Heal – Heal every target you can because every action they do while being healed, earns you Alliance Points (AP). So often times you’ll see someone running around casting Rapid Regeneration (Restoration Staff Skill Line) over and over. With a 16 second duration, this skill is the best to spray on a large group repeatedly. You can also use Healing Springs (Restoration Staff Skill Line) for a large area heal or both. Either way, heal other players for massive AP gains. Additionally, remember to resurrect those fallen allies too, as that’s a decent source of AP plus it helps make a push on an assault or a defense.

Repair – On a slow campaign like Haderus, I can’t stress the importance of repairing. It awards decent AP while helping your alliance. I used to only repair the breach wall upon a successful siege, but now I scout every wall on the keep. Don’t forget to repair the doors too, as they are different and often times go unrepaired. While repairing, you give your alliance time to find the next location to fight. So instead of spending time riding around finding a fight, you can join it immediately.

Solo v Group – Sadly, I’m better off playing solo most of the time. I don’t know how the mechanics work, but I receive more AP off on my own sprinkling AP dust (AKA Rapid Regeneration) everywhere. The most advantageous time to group is at nights when you have enough members to properly siege and assault the Emperor keeps. Until then, really just go on your own.

Defense – We’ve all heard the annoying cliche “defense wins championships.” The idea can be applied to our Emperor chase. While I’m on my own, often times I don’t assault keeps. I only go defend keeps once they’ve been flagged. It’s much easier to defend a keep and it only takes one guard being pulled for a defensive tick or “D-Tick).” While soloing, I’ll go deep in enemy territory and solo a resource. I’ll sit there as one person after another tries to kill me. I can solo nearly anyone with guards including an Emperor and this awards about 1,000 AP even if I kill a level 10. Be patient, don’t leave right away they will come, believe me.

Ganking – We did an experiment as a group to see how advantageous ganking is over assaulting keeps. My group of 10 took a resource which awarded 20 AP. That same group killed a level 40 and everyone got 80 AP. Think about that, 4x the amount of AP for killing one person. Even a small gank group of well coordinated players can tip the scales and gain massive AP. At one point, I 1v6 a small group at a keep giving me around 10,000 AP in 10 minutes. No, I did not kill them all at once for an epic YouTube video, I started slow. I went for the lowest HP target and nuked them with seconds using my ultimate. I got another two to chase me to the front guards then I picked the weakest target again. Then, I went back up front and they resurrected the weakest player, who I killed again. After they entered the inner wall, I went inside setup oils and Razor Caltrops. Slowing them down to a halt pouring oil while the Mage Guards nuked them. Bang, 10k AP.

Prepare – I can’t stress at how important it is to prepare. My preparation lacked two things, knowing the campaign I was pushing and overall PvP meta. I consider myself very good at fighting, creating builds, and utilizing game mechanics; but I had no idea about general PvP strategies and tactics. Eat your humble pie and watch the best or join them. Learn what they’re doing and why. After having my teeth kicked in for about four days, I started seeing the importance of meatbags and oil pots. On your Emperor push, you don’t want to learn all the tactics like I did, you want to be the master of execution. Make sure you understand PvP and prepare for the type of environment Haderus is, not crowded Thornblade. Go play there for a week and see what happens during peak hours and off times. It’s a much different place than any other server. 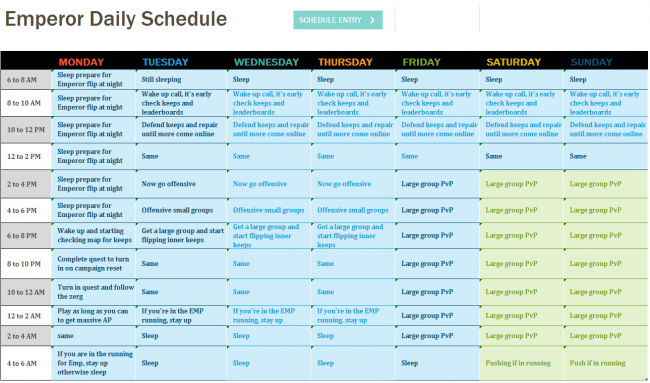 Another one of my monster failures is schedule. If you know me, I sleep a lot. I’m talking easily 10 hours a day. I thought, “oh I’ll just go down to four a day without any problems.” Wrong…so wrong. There’s a reason that in the Army we were trained to be sleep deprived. That way when it mattered, we knew how to handle it. First tip with schedule, is start dwelling down your sleep until you are comfortable around the six hour range. You’d like to be at four a day if possible though it was extremely hard for me and that’s what broke my spirit more than anything.

At each day and time, you should be focused on something specific as the campaign fluctuates in optimal AP gains. Below is the list of what I found to be most beneficial. Times

The slow and steady method to getting Emperor is to follow the lessons above. At one point, I was in 3rd place and pretty close to number one. Using this method, you should be generating 10,000 AP per hour regardless of play times and 100,000 AP a day. The trick to succeeding with this method is motivation. At some point, it will stop being fun. You need to find a way to make it fun and rewarding. Also, don’t check the leader board often. Remember your path will take time and it’s like looking at the scale every two hours when you’re trying to lose weight. Focus every second on AP, not your spot. Over time you’ll start moving up.

This track has you go hard on Monday night with a good chance to get crowned. Basically you start on the server when it resets, turn in all of your PvP quests, and rush with the zerg. You want to be solo, but close to the zerg to get credit for the kills. Gank and defend when you can, and stay alive. The good thing about this method is within four hours, you’ll know if the Emperor is within reach. If you’re in the top three, keep playing and pull an all nighter. If not, try again next week and so on.

Play the Campaign – You need to know the meta prior to launching in for Emperor. Spend a couple of weeks scouting the campaign and see what works.

Follow not Lead – Don’t be the leader during your chase, you need to follow and focus on gaining AP and staying alive.

Understand PvP – I’m not talking about your build but the meta of what teams are doing against you. Know where to place a meatbag and why it’s more important rather than clicking the “4” key 100 times.

Prepare – You need to have all the gear and items for you push as well as preparing your mind and body. Don’t go from 10 hours of sleep to 4 and expect no problems.

Fun Factor – Find a way to have fun in game and out. Chatting in TeamSpeak3, turning on Netflix or anything to keep your motivation high.

Breaks – Get up and move around a lot. Even take a hour lunch and dinner to do something besides gaming. If not, you’ll start to feel it and lose motivation.

Repair – The most undervalued AP gainer is repairing. Constantly look for walls to repair.

Solo – Get a build and a set of gear made for soloing and survival. Go off on your own and gank players during slow times for massive AP.

Keep it a Secret – Yep, don’t tell anyone you’re going for Emperor. Go offline and tell your guild “I got something going on this week.” Otherwise there will be those looking to troll your experience.

What CyrHUD does is give a popup once keeps are attacked and flagged. It automatically reads how many siege weapons are up and makes it easy to peel off and defend. It also tells you about resources as well so I consider a must have addon. Thanks Sasky for creating this and here’s the CyrHUD link.

Another helpful add that displays in your top right screen. It list your kill death ratio and so forth. The main benefit is listing resources and keeps that have been flipped in your chat box. Keeping an eye on CyrHUD and Kill Counter will have you prepared to assault or defend at a moments notice.