Many Pilots burn their Cards without a second thought. To do so is to never see their true potential. The Three Golden Rules of Burn Cards will help you avoid this bad habit that may have cost you and your team many victories in the past – and they will imbue you with power that you didn’t know was even possible. Follow these Rules wisely, and you and your Titan will dominate the battlefield.

This is the single most important Rule for utilizing Burn Cards. If you do not follow this Rule, you are wasting your Cards, and greatly diminishing your own potential power. If your team doesn’t follow this Rule, and your opponents do, they will win. A skilled player who knows how to exploit stacks can easily carry an entire team.

To properly “exploit stacks,” you must utilize all possible loadout selections that stack with your Card. Let’s take a look at a specific Titan Burn Card. If we exploit its stacks properly, then this single Card can do enough damage to win the entire match. 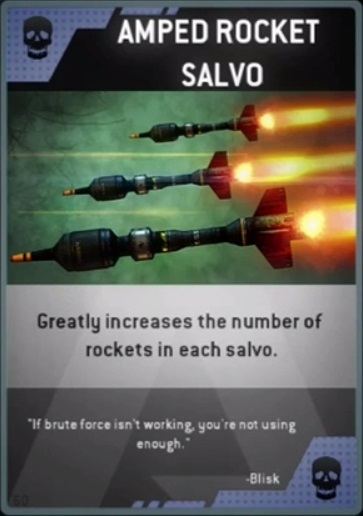 AMPED ROCKET SALVO – Greatly increases the number of rockets in each salvo.

If you have ever burned this Card with whatever your favorite Titan loadout just so happened to be, without thinking about it, because “yay, it’s my favorite Titan, but now it shoots lots of rockets at once!” please apologize to yourself and to your teammates, and vow to never do so again.

Think about this problem as a sort of riddle or brain-teaser: Design a Titan loadout that can best utilize this Card. Continue reading when you’re ready.

(Seriously, stop reading right now, and actually think about how you would design a loadout around this Card. I’m not going to give you a guide on how to best utilize every single Burn Card in the game, so in order to be able to follow this Rule for other Burn Cards, you will have to learn how to do this by yourself.)

The first option we have is the Chassis. You should be using the Atlas Titan. Anyone who is experienced with the Atlas knows that the Damage Core is quite powerful when used with normal weapons, as it multiplies your damage by 1.4 times. However, it becomes more than just “quite powerful” when used with Amped weapons. That 1.4 times bonus will apply to all 24 rockets in your Amped Salvo.

Your Primary Weapon and Tactical Ability do not matter much; choose these based on what you are most comfortable with. However, I would not choose Particle Wall, as it does not stack with Damage Core (since Particle Walls do not do damage), whereas I’m fairly certain Electric Smoke and projectiles reflected by Vortex Shield both do additional damage after Damage Core is activated.

Kit 1 should be obvious. If you had never considered stacking loadout selections with Cards before now, and tried to solve this “riddle” on your own, this is the point where you most likely had a “Eureka!” moment. Fast Autoloader shortens your salvo’s reload speed from 20 seconds to 16. This means you’re able to fire a barrage of 24 rockets, 3.75 times a minute. That’s right: you’ve now got a rocket salvo that fires at an average of 90 RPM.

For Kit 2, you’ve got two great options. Core Accelerator doubles your core recharge bonus from kills, and we’ve already seen how important Damage Core is with this build. But Core Extender is your best option, as it extends your core duration from 12.6 seconds to 17.9 seconds. This means that, when paired with Fast Autoloader, you can firetwo barrages in one Damage Core activation. If you can time everything correctly, firing one barrage right after activation and one barrage right before it runs out, then every time you activate your core, you can fire 48 rockets, which will all do 1.4 times their normal damage. The impact of a rocket does 250 damage, and the resulting explosion does 200 damage to armor. So against an enemy Titan, that’s 450 damage per direct hit * 48 rockets * the 1.4 Damage Core boost = up to 30,240 damage per Damage Core activation, from the Salvo alone, not counting Criticals or collateral damage to secondary targets in the blast radius. To put that number into perspective, just one volley at point blank will kill an Ogre with maximum health and an activated Shield Core, even without any Critical Hit bonuses – and again, you get two of these Ogre-shredding volleys per Core activation.

It’s important to note that “always exploit stacks” does not mean “always stack whenever possible.” (It simply means that you should exploit powerful combos whenever possible, like the above Amped Rocket Salvo + Damage Core + Fast Autoloader + Core Extender.) Smaller stacks can sometimes have alternatives that are just as good. For example, what Tactical Ability works best with Prosthetic Legs? Certainly, Stim is an excellent and obvious choice for a stack; a significant speed boost on top of another significant speed boost lets you wallrun absurdly fast. But Prosthetic Legs + Cloak is a viable alternative, as it makes you fast and stealthy, at the same time. Spitfire LMG + Slammer + Prosthetic Legs + Cloak + Stealth Kit = an enemy Titan’s worst nightmare. (Besides the aforementioned Ogre Shredder, of course.)

Finally, note that in rare cases, it’s possible to stack multiple Burn Cards. For example, you can use Reserve Ogre/Atlas Refurb/Spare Stryder to call in a Titan with a good anti-infantry weapon (Chaingun, Triple Threat, etc.) at the very beginning of a match, then immediately suicide with a Satchel Charge, respawn with Map Hack, and enter your Titan. You now have a Titan far before anyone else, and you can see where all the enemy Pilots are at all times, so you’re practically immune to sneak attacks and rodeos as long as you’re paying attention. Deciding to use this tactic almost guarantees you victory before the match even begins – although many might argue this is less of a valid tactic, and more of an unfair manipulation of the gameplay mechanics. I leave that judgement up to you.

EDIT: Here’s a bonus stack that you might not figure out on your own: Most Wanted List + Core Accelerator =100% core charge after killing only one Pilot!

Redundancies can turn a Burn Card that’s typically fun and awesome into pangs of regret, and a quick death. Think before you burn, and always check to see that you’re using a compatible class.

Different Burn Cards are useful in different situations. Timing your burns properly is key to achieving strategic domination. (Choosing what Burn Cards to bring based on the game map and mode is similarly important.)

Here are just a few ways to time your burns properly:

Blue Titan Cards deactivate when your Titan is destroyed.

Yellow Titan Cards deactivate when you are killed.