This guide will show you the current 100% ranged Tasky build that I use, along with a few variations for those of you that want to fiddle around and find the way to play that you like. Currently, without Dismember, a ranged Taskmaster build won’t have as much DPS as melee, but I think it’s extremely fun to play this way. 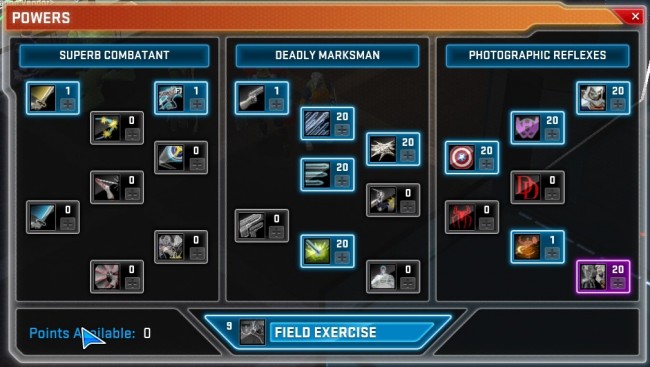 So, when I play I pop the signature on cooldown pretty much unless there aren’t any bosses/not very many mobs around. Drop my web and nerve gas on the baddies and shoot Legion Arrow or Deadly Volley depending on if it’s Single Target or lot of guys. Dashing through people will also give you the Dexterity buff for 10 seconds.

A bit of variety for this build for those of you that aren’t 100% happy with it. You can use Shield Bounce and only put one point in the Signature. Or Shield Bounce and only one point in Web Net. If you need Spirit Regen you can use the Spider Stance instead of the Captain Stance. I would play around with these and see what you like the best. Some people don’t use Deadly Volley, which is an option too, I just really like it.

I’m also trying to get +20 to my ultimate (I’ll get there someday!) but I kinda dislike that it’s a summoning ultimate on a non-summoning character. Oh well, it fits Tasky pretty well.

I’m going to go through the items I currently have and then after explain some variations people can use, and also items I’m saving up to get for Tasky in the future.

For my slots 1-5 I use all of Taskmaster’s Uniques, they are all pretty good for him and it’s easier to get Challenge Bonuses on your own character’s uniques than an Any Hero. That is until they add a recipe to upgrade items with a Challenge Bonus.

I’m also trying to get Anti-Metal Ammunition to use for my slot 1 since Tasky’s slot 1 is melee focused. Although it’s still really good.

For enchants on 1+5 you can do Physical or Ranged. Depends on the runes you have, but they aren’t really expensive. 2-4 is dependent on runes, but I like spirit.

I use Relic of Lemuria for the Life on Hit but if you feel like you don’t need the survivability/are tired of putting Lemuria on everyone Xandar and Atlantis could be good alternatives. Like I said, I like to include some variations because I know every player likes different things. 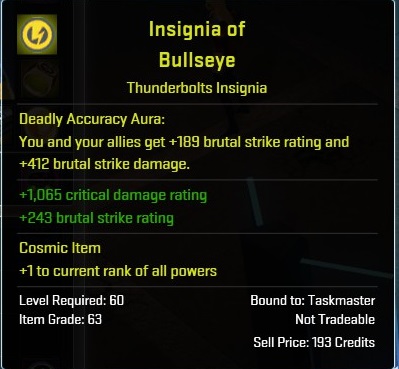 I got pretty lucky with my insignia, but basically I think Bullseye and Elektra are great for Taskmaster. I’m finding that now that so many people use O’Grady/Valkyrie and the effects don’t stack you and whoever you play with is going to get more benefit from a different aura. Basically Bullseye is Brutal Rating and Brutal Damage and Elektra is the same with Critical. As far as affixes go I think it really is preference between the good stats that are available, so get affixes you need/can afford. I’d say Crit Rating, Crit Dmg, Brutal Rating, Brutal Damage, +1 to all skills, Ranged Damage are all great. You could even benefit from health or Area Damage depending on what you need and your luck getting the right insignia. And now insignia doesn’t look like a word. On to Legendary options.

I use Savage Axes of Ares but another good option is the Golden Bow of Apollo. This is one of those preference things again, if you want the attack speed the bow is nice, but you’re really missing out on a lot of Brutal stats. 3rd good option (not in any particular order, picking from these 3 you’ll be solid) would be Gungir because just look at that crit.

Rings! With the advent of the Cosmic Chaos event Cosmic Rings are much easier to come across. Here is the ring I use: 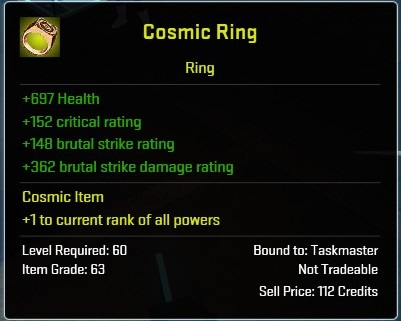 Basically I’m just gonna list of stats to look for. If you get ¾ of these you’re good to go, but aim for 4 now that rings are cheaper and easier to find the perfect one. So look for Brutal Rating, Brutal Damage, Crit Rating, Crit Damage, Ranged power damage, and possibly health for survivability.

Alright so, I know there are a lot of typical artifacts that are really good but also really rare/expensive. This is where I think there is the most wiggle room as far as picking artifacts that go along with how you want to play.

Here are my current artifacts:

Now, these aren’t the 4 artifacts I would pick if I had access to every artifact in the game currently, but I’ll tell you what those are and some options for people.

So from these four (Advanced Crimson Crystal of Cyttorak, Advanced Metasensory Array, Superheroic Maht’s Arrowhead, Pym Shrinking Serum) I’ll kinda justify my current use of them.

ACCoC is really good for damage and survivability. The invulnerability is super nice and the amount of damage you can get on a good roll is great. This is one you can switch out for something you think is better if you really don’t want/need survivability, really depends on how/what you play in game.

Metasensory is nice for the attack speed and damage but I feel like it could be easily replaced. If you can get a really good roll it’s great, but I could see GotK and HoD replacing it if you had them.

Maht’s is insanely good for spirit regen. If you find yourself okay for spirit regen without it, get rid of it for something else. I’m currently saving up for Arnim Zola’s ESP box to be my replacement for this.

Pym’s Shrinking is good when I’m playing solo, but in raids you aren’t dodging as much so this is easily replaced by another item or you can swap items when raiding and when solo.

Now, I know everyone recommends getting a Gem or getting a Hand and I know that can be out of reach for a lot of people. So, as far as options go, Advanced Super Soldier Serum is good. I used it until I switched to ACCoC. Danger’s A.I. Chip with Physical damage could be useful with a good roll. There are a lot of good artifacts out there and I don’t wanna just say “Get a GotK” like it’s the easiest thing to do, so there are a couple options that shouldn’t be crazy expensive or time consuming to get.

As far as blessings go I use Fandral currently as the Dodge and Crit is nice. Hela is viable, possibly better actually, but I’ve already said a million times pick what you like and playing Taskmaster will be more fun than picking what is “best”.

For my Uru-Forged and Runeword I use +Physical Damage and River of Souls. Now, if you have the runes/currency to buy them Bowazon would be super awesome. You also have to take into account your spirit regen once you switch that out. This build doesn’t have points in a basic so you’re going to want to have spirit all the time. A lot of the spirit regen comes down to what you have for artifacts and possibly Omega System so just be aware of spirit as it is affected a lot by swapping to Bowazon. 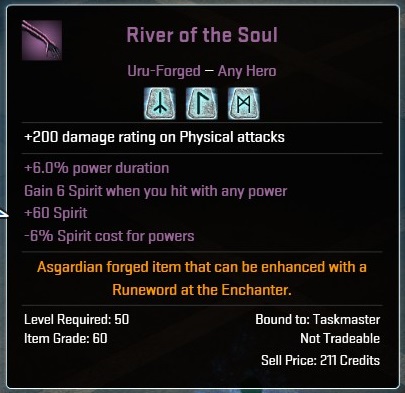 For my medal I use Doctor Doom. I’ve gotten his Cosmic Medallion one time and the rolls were abysmal so I’m stuck with this for now. Grim Reaper is also another good option for a Medallion. 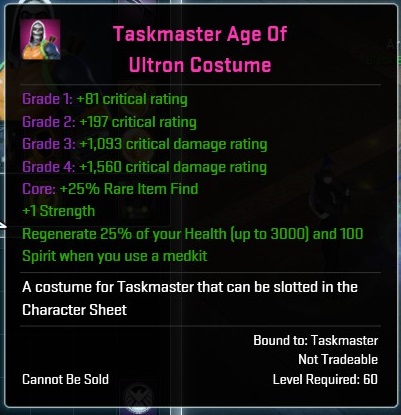 I’m just gonna be upfront and let you know that the Age of Ultron costume is vital for this build. The dragon backpack just makes Taskmaster stronger all around. And cooler.

In all seriousness, I love all 3 of his costumes and Tasky is just great.

For affixes you probably could roll Critical Damage on all 4. I chose Crit Rating on the first 2 because I needed a little bit more. It’s your life, roll what you want. Although, be careful I think I got carpal tunnel rolling my grade 4 a million times.

For a core, the Health/Spirit on medkit is so vital for Taskmaster. If you get one stat please get this one, it will change how he feels a lot. Makes running basicless even easier. I roll with +Strength but you could get 2 second invulnerability if you wanted. Kinda preference for the 2nd stat.

Alright so basically I’m just gonna list off nodes that are useful because this is heavily dependent on how many points you have earned and there are a lot of options.

Assassin Programming in Neural Enhancement. A decent chunk of damage for not a ton of points, pretty nice to have.

The Special Weapons tab has a decent amount of useful nodes. Assault Rifles is %Ranged Damage, there are also nodes like Night Night Pistol and Needle Gun that look pretty cool. Just depends on points you have.

In Nanotechnology you have Spin Tech. Super good for raids and if you are running cosmics. Straight damage rating against bosses,

In Human Augmentation you have the Deathlok Program, Reaver Program, and Super Soldier Serum that are pretty sweet nodes. Goblin Formula also seems to be popular to use.

For Synergies there are a lot of choices. Look for Ranged/Area/Physical bonuses. You have them on Luke Cage, Human Torch, Moon Knight etc. It’s hard to recommend synergies thought because it literally just depends on what heroes you own.

Team-up is also dependent on who you own, but Firestar is great for a lot of characters. I use her on 100% passive, but that’s my preference. 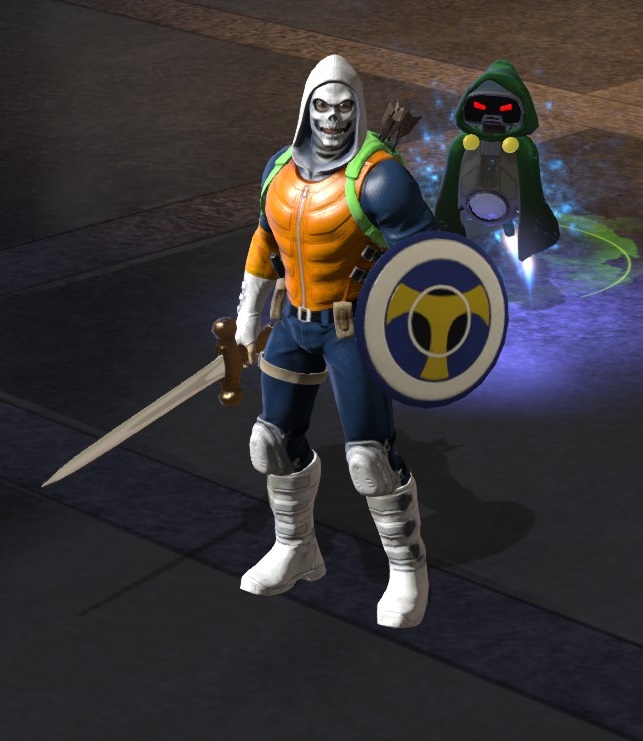 I hope you get some use out of the guide. I like how it plays and feels, and if you don’t that’s fine. Play with it, tweak it until it’s fun for you. Taskmaster is fun to play and he is hilarious to listen to. If you have any questions feel free to ask me. Now get out there and kick some butt!