I’m going to let you into a little secret. Swarm is very much viable right now, and is in my opinion one of the top decks.

I’ve considered myself to have a Lilithe in my back pocket since the 1-draw change. Since Skorn was released, swarm has effectively fallen out of the meta, even though only a handful of decks even run him any more. It seems that the time is ripe for Lilithe Swarm to make a grand reappearance… Without further ado, here are the decklists, with the (necessary) explanation following. 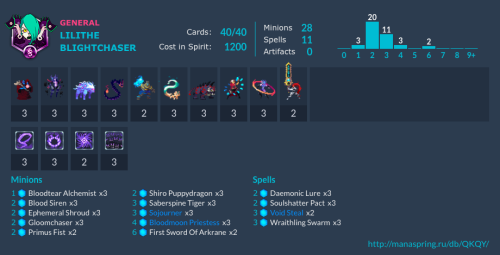 I’ve played 10 games with this deck in Diamond and won 6. I fully believe this deck could be taken to S-rank and would get a similar win rate there. All for only 1200 spirit and with no epics or legendaries. Totally recommend trying this deck out if you’re a budget player. 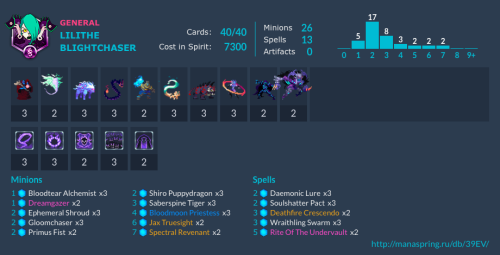 This is the deck I’ve been bringing to tournaments with good success, and also the one I play on ladder.

How to Play the Decks

These versions of the deck are very aggressive compared to popular swarm decks. We can ignore the opponents gameplan and focus on developing swarm, and then capitalize with an easy lethal if they cannot or choose not to deal with our swarm. We don’t have the greatest lategame, so we aim to win before turn 8 or 9, although the deck is capable of winning as early as turn 2. The gameplay for the full version of the deck is as follows:

In general, you shouldn’t be afraid to dump a bunch of low cost minions and then refill with Rite of the Undervault. If you have a swarm but no capitalization cards, the best idea is usually just to develop more swarm instead of trading it in to clear the board.

The budget version plays very similarly, except with worse capitalization cards and no backup plan.

Lilithe in the Kron Meta

The thing about swarm is that it is very polarizing. Either your opponent has the answers, or they don’t, and that is going to be the deciding factor in many games. Under a skilled pilot, the deck has a great matchup against any deck not running AoE, and a bad matchup against a deck running AoE. We can often straight up ignore the opponent’s game plan – lots of games simply come down to if your opponent is running any answers to swarm or not.

The good news is that very few decks actually run any AoE. The main cards that shut down the swarm deck are: Grasp of Agony, Blistering Skorn, Plasma Storm, Tempest, and Frostburn. Notice how few of these cards are actually run in meta decks. Why would anyone run counters to swarm when swarm isn’t even in the current meta?

The three most powerful decks in my eyes are Kara, Vetruvian, and Reva, and none of these actually run any AoE at all. Lots of matches, especially against Vetruvian, just feel like free wins.

That’s why I’ve been bringing this deck to tournaments. If the opponent brings three deck lists, probably ~1 of them even runs answers to swarm. Most of the time, it gets you a great matchup for the first game, until they switch to the deck with answers.

The core of the deck is the low cost minions we want to be spamming. Some combination of the following will work depending on taste:

Outside of these, we run a few more cards to help us develop swarm:

Combine this with Daemonic Lure as our only removal.

If you read all that, kudos. I’m impressed. Hopefully you learnt a little about the way I play swarm, and I encourage you to try it out yourself. If you have any questions, hit me up on reddit, discord, or in game.