Today, I bring to you some of the uses for the newly released Ice Golem showcasing its various capabilities by itself as well as combined with other cards.

Ice Golem is a fantastic card because it offers something completely unique when compared to every other card in the game. With 1100 HP and the ability to target buildings, there is finally an official ‘Mini Tank’ in the game. These two aspects give it the unique ability to kite units reliably for only 2 elixir. With correct placement, the Ice Golem is fabulous as dismantling pushes and separating units. It’s large HP pool also makes it excellent at damage mitigation and prevention. Below, I will show several GIF examples of possible uses for Ice Golem, but believe me, they do not stop here. 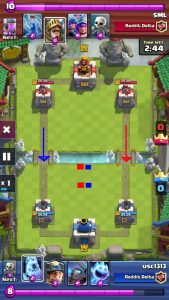 Thank you for reading this post, I hope you found something useful within this post and I hope it inspires you to use Ice Golem. I have received outstanding support on my GIF guides and I have had people ask if I was planning to make YouTube videos. If this is something you would like to see, please let me know. As for anything else, Questions, Comments, and Criticism are all welcome below.