I’ve noticed a lot of misconceptions going around about movesets, so I thought I’d do a quick write-up to explain some of the terminology thrown around regarding moves and how to interpret them.

Damage Per Second, or DPS, measures the amount of damage that a move outputs in a given frame of time. Each move has an amount of damage associated with it, in addition to an animation that defines how long it will take to execute the move. To derive DPS for a move, we divide the damage it deals by the length of its animation. For example, Water Gun deals 6 damage, and takes 0.5 seconds. Thus, its DPS is 6 damage divided by 0.5 seconds, or 12 damage per second.

Myth: The higher the DPS, the better the move.

Many people use the DPS move chart here to determine the quality of moves, and consider a higher DPS number a better move. However, DPS numbers do not consider the energy generated or consumed by moves, which in turn dictate how frequently you can use charged moves. For example, the highest DPS charge move is Cross Chop, with a DPS of 30. However, Cross Chop only deals 60 damage in exchange for 100 energy. In contrast, moves like Solar Beam or Hyper Beam deal 120 damage for 100 energy, and moves like Ice Beam or Dragon Pulse will deal 65 damage, more damage than Cross Chop, for only 50 energy.

The reason for this disparity is because Cross Chop has a very fast animation at only 2 seconds. This allows you to dump a large burst of damage in a very short period. However, the trade-off is that you cannot use it as frequently as some moves that deal the same amount of damage, and it will not deal as much overall damage as moves that take longer to execute. Overall, you can consider DPS a rough guide in some situations. For example, it’s generally not good for attackers to have a lower charge move DPS than basic move DPS, because the time you spend using the charge move will be time you won’t be using on the basic move, lowering your overall damage. DPS is also a consideration if you’re fighting something fragile, or fighting with something fragile, where you need to settle things fast with quick animations. However, it does not provide a full picture of how a moveset operates.

To compensate for the issue of DPS rankings not considering energy regain and consumption, people have calculated what is called weave damage for movesets. Weave damage is calculated by looking at the amount of damage a Pokemon will do over a period of time if it were using its quick attack until it gets enough energy to use its charge move, using its charge move, and then repeating until time runs out. Thus, weave damage attempts to give us a more realistic idea of how much damage a moveset will deal over a period of time.

Most ranking lists are based off of weave damage, for example, this one, which is the latest one I can find: 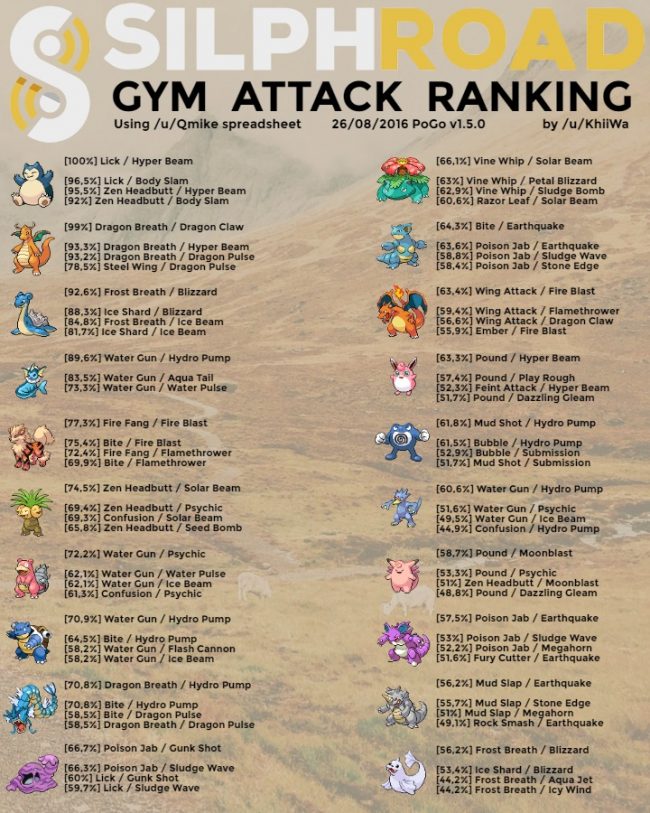 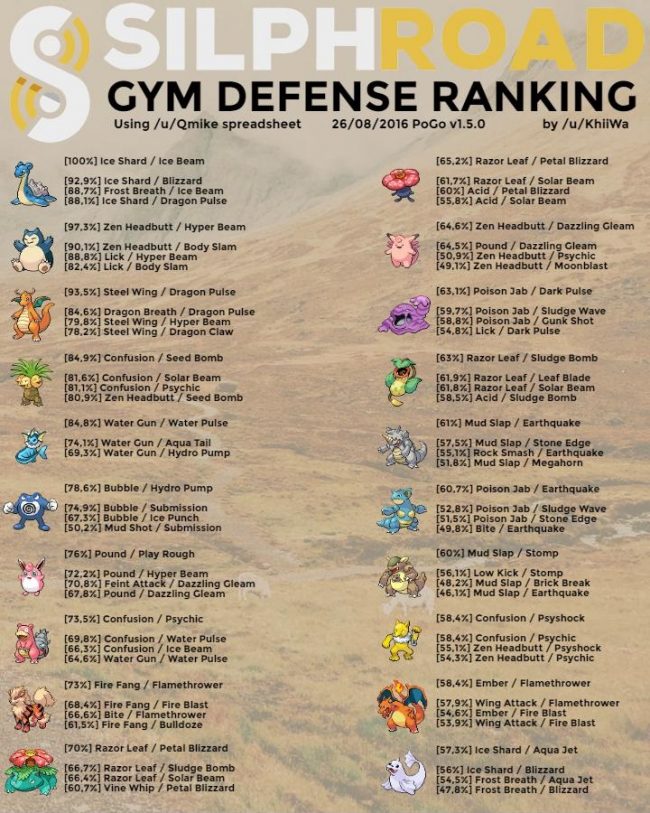 So how do I pick the best moveset?

Because there are so many subtle factors in real combat that are difficult to quantify, determining which movesets will work the best for you can be a qualitative task. Weave damage and DPS provides a good place to start. First, you want to check which moves are viable for a Pokemon. For example, in some cases, one specific moveset dominates by miles for a Pokemon by weave damage rankings – Alakazam’s Psycho Cut/Psychic and Pidgeot’s Wing Attack/Hurricane are good examples, and these are generally the only moves that are viable due to the disparity between their weave damages. However, in most cases, most movesets are pretty closely clustered in terms of performance. Another example, as previously mentioned, is that you generally want to choose a charge move that has higher DPS than its basic moves (some exceptions can be made for defenders, but that’s another discussion in itself). You want a useful charge move, and one that’s weaker than your basic move is no good.

Once you pass these preliminary checks, it now comes down to play style and situation. Consider these points – this isn’t by all means an exhaustive list, but gives you a starting point:

How much dodging do you plan to do with the Pokemon?

Some Pokemon are extremely fragile, and require constant dodging. Frequently, these Pokemon will be used for training gyms, so they’ll be at a lower CP than the defenders you’re taking them on with. If that’s the case, you might want to pick a faster attack than a slower one. For example, Scyther can get Bug Buzz and X-Scissor as its charge attacks. Even though Bug Buzz has a higher weave ranking, you may still want to pick X-Scissor because it is extremely fast, and in some cases, permits you to dodge every single attack – which is important, because Scyther cannot take a hit.

In other cases, this comes down to playstyle. Arcanine is relatively tanky, but some people like to dodge more with it than others, favoring Bite over Fire Fang.

What defenders do you plan to match the Pokemon up against?

Typing is important to consider. As previously discussed, if you plan on taking Starmie against Vaporeon, Water Gun/Psychic is a good idea. This is not a bad match-up either, because Starmie gets to resist everything Vaporeon uses against it, while dealing neutral damage with its Psychic attacks. However, if you plan on using it against Fire pokemon purely, you might want to use Water Gun/Hydro Pump instead.

Many other Pokemon have this break-down in types. Parasect gets both bug and grass charge attacks, which means you might want to use the former against Exeggutor, but the later against Vaporeon. Omastar gets rock and water attacks, so if you’re fighting Lapras, you would like to pick the former, but the latter for fire types.

One thing to consider though is STAB, or same type attack bonus. If you use a move that has the same typing as the Pokemon who’s using the move, you get a 1.25x bonus to damage. Due to this, it’s generally best to err on picking moves that are common to the type of the Pokemon, but some exceptions can be made.

Are you willing to settle battles fast if it means consuming more resources?

Some people like to play cautiously, others like to throw abandon to the wind. If you’re focused upon dodging every single attack, it makes sense for you to pick faster moves over slower moves, and possibly pick multi-bar moves over single charge moves for reasons outlined above. However, if you just want to settle a match with overwhelming brute force as fast as possible, your choices might be more in line with weave rankings. This question will also depend upon if you’re attacking an enemy gym or not. If you’re attacking an enemy gym, you can bring mons that have an overwhelming CP advantage and stomp the gym, so you may not be very concerned with dodging at all especially if you have a nice stock of Max/Hyper Potions and revives. In contrast, it may pay to train friendly gyms more cautiously because you get rewarded for bringing lower CP mons.

Remember – this is a game, so have fun! I like pounding away fast and furious with lots of quick weak attacks rather than big heavy hits, so I usually go for fast attacks with short charge bars. Other people might like the satisfaction of hitting a nuke and watching the HP drain. You might thematically like the concept of bringing down a Pokemon with Psychic moves, or shooting giant lasers at them. In reality, the differences between movesets are frequently very small, so fun is definitely a factor to consider.