I still wanted to help everyone including those members in my clan so I’m going to write this guide about my go-to deck that I saw at the top leaderboards and it requires no legendary cards! This isn’t my deck but when I drop below 3000 and I want consistent wins, this is what I use. I believe its called the trifecta hog deck and it is easily capable of reaching 3000 trophies. The multiple times I have done it, my card levels weren’t even optimized. 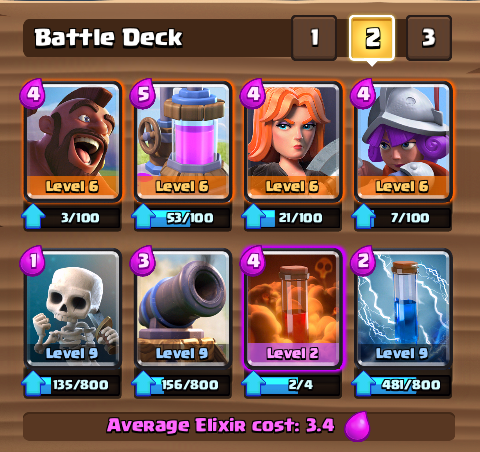 Strategy: I personally play this deck more of a counter push. As you can see, most of the cards are good on both offense and defense. You want to capitalize on your opponents mistakes and create a positive elixir push out of them. Don’t expect to take the tower right away. Chip away at it while maintaining elixir advantage. The only time I play super aggresively is when they drop a golem or huge tank. Then I go crazy on the other side so they cant drop back up for their tank. Even if they drop a tank on the side you are attacking just switch to the other side. You can work both towers or draw. Either way it’s better than losing. This deck may have some trouble with the lavadragloon combo I see some people running because musketeer is your only real anti-air. Always focus on the balloon and try to get the musky to hit it and sometimes you may have to use both cannon and elixir pump to drag it around for your towers.