Hey guys! M4SON back again with another F2P high level legendary arena deck for you guys. Now a little back story to this deck, I met an awesome player while playing in the PGL (Pro Gaming League) for Clash Royale. I played against his deck and was amazed how well constructed it was and how strong a counter push it had. I beat him once but kept losing afterwards against it! So big shoutout and thanks to “AwDaSea” from Clout Stars! An overall amazing player and person! He used this deck and climbed to an amazing 3700+ with only lvl 10.5 commons and lvl 7 rares! Anyways, let’s take a look at the decklist! 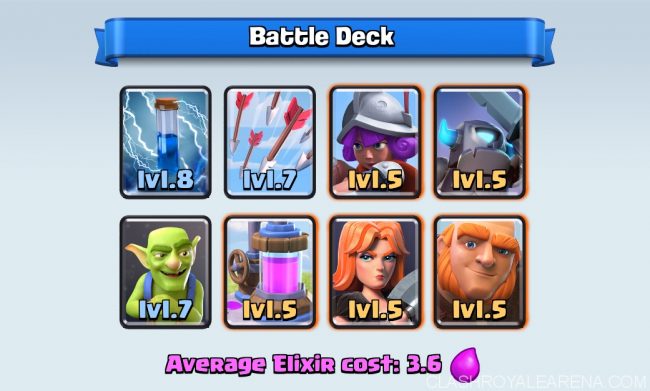 Zap: Not much to say about one of the best spells in the game. Great for taking down minions, skeles, horde, and goblins. Use on both defense to save yourself in desperate situations. But, even more powerful as an instant utility tool on your offensive pushes. Great for getting your Mini Pekka to the tower, or allowing your musketeer to get a few extra shots off. Can also save your giant from inferno towers by stopping the charge for a second.

Arrow: Again, another great spell used on both offense and defense. Generally saved for minions or horde. However, can occasionally be used to snipe off the princesses, make sure you’re hitting their elixir collect too if they have one! Pre fire on offense with your pushes to snipe off some cheap group troops or even a minion horde. Because this deck lacks air defences arrows are a must!

Goblins: Great card for cycling after skeles nerf. For 1 extra elixir it can make it to the enemies’ tower getting off great chip damage if left uncontested. Use to also distract typical princes, knights, mini pekka, etc. If the enemy wasted their spell can also be used to shred apart a royal giant in seconds. Great tool to also send on mini pushes with valk or mini pekka giving them a speed boost. Also used to distract inferno towers or dish out huge DPS with a giant or any tank in front.

Mini Pekka: All around one of the most solid cards in the meta game today. Great against hogs, miners, royal giants, etc. Send behind the giant to kill barbs in 1 hit with the help of zap. Can also use it with a mini push of mini pekka + valk. Valk will kill anything that generally distracts the mini pekka. Overall very strong card that will defend and turn into a strong counter push with near full hp. If the enemy has an inferno, use your other troops to distract while your mini pekka sneaks in to kill it.

Valkyire: Another great all around card. Good for taking out or weakening barbs for your mini pekka to finish off. Stops any cheap ground units relatively easily allowing her to counter push with near full hp. Great for absorbing opposing mini pekka hits. Can be used as a cheaper giant to protect your musketeer. As well as split pushing with valk + goblins for quick speed boost to the enemies tower.

Giant: Your main damage absorber. Let him soak up all the damage why your trifecta does all the damage. Depending on the situation either drop him at the back allowing you to build up your push, or drop at the bridge last second to protect your musketeer, valk, mini pekka, etc. If the enemy has an inferno tower make sure you have a mini pekka to back up your giant!

Musketeer: The low-key crazy DPS of the deck. Taking it back to Arena 1 days with the good old giant + musketeer combo. Still an insanely good combo that offers huge damage. Protect musketeer with other three cards; giant, valk, mini pekka. All three of those cards will tank and do damage while the musketeer sits back and pops away at the enemies’ troops. A single musketeer uncontested can do upwards of 500+ damage to a tower! Again, sticking with the theme musketeer will be great on defence and turn into a counter push with relatively full hp.

Elixir Collector: Pump up elixir to win games. Not much to save about elixir pumps. Best card to have in your hand as an opening move. Playing it first forces your opponent to make the first move allowing you to counter. Try to have as many pumps as you can while constantly defending and counter pusher. Ideally want two pumps just as double elixir hits.

Not too many bad opening hands with this deck unless you get both spells. Ideally you want to get down your elixir collectors right away so either get lucky and draw it first and plop it down. Or cycle with something like goblins at the bridge to get chip damage to get to your elixir collect. When you’ve done that and there’s nothing to defend dropping musketeer behind king tower is generally a safe move to make. Gauge how the opponent reacts and counter play accordingly. Try to understand right away what deck your opponent is playing so you can save key cards such as mini pekka for royal giant. Keep setting up defences that turn into huge counter pushes with either giant or valk in front, while your two big DPS mini pekka and musketeer wreak havoc in the back. Try to have two pumps down as double elixir hits, this is where you will start overwhelming your opponents by defending and setting up even bigger counter pushes, now with enough back up elixir to arrow and zap to assist the push. That’s the general game plan of the deck, checkout the video for matchups against Royal Giant, Miner Mini Pekka Cycle, and Lavahound!

That’s it for today folks! Hope you guys find success with this deck, let me know how it goes! Once again big shoutout and thanksn to “AwDaSea” for hooking up the replays and insight into the mechanics of how the deck comes together! Take care everyone!