When Nedder Test Area first unlocks for you and some side missions send you in there, you might feel overwhelmed. “How am I supposed to beat all 5 of these tests?” Even if you think you’ve got a fairly well-developed build at that time, you might be surprised at how badly some of the test platforms spank you. As a result, you might be inclined to disregard Nedder as a place to go into only when forced to do so by a side mission or storyline mission, and only to grab the mission objective and then F11 out as fast as possible.

However, there are two compelling reasons to master Nedder:

Why does Nedder exist?

If you’ve played games like Final Fantasy XIV or The Secret World, you’re already familiar with the notion ofskill gates or DPS gates. For example, in the early months of the first reboot of FFXIV (A Realm Reborn), you could not even attempt the highest raid dungeon progression until you acquired your Relic Weapon. And you could not earn this weapon unless you passed a series of increasingly harder Trials. The last two trials to acquire your Relic (Garuda Hard Mode and Titan Hard Mode) were extremely difficult and required a huge degree of both personal skill and team skill, as well as a very high DPS gate.

In The Secret World, they had a mission literally called “The Gatekeeper” that you had to pass solo before you were even allowed to enter the staging area where the third, hardest tier of NightMare dungeons were queuing up. This mission was a grueling, exacting skill and DPS check.

Well, in a similar manner, Nedder exists here as a type of Gatekeeper mission, only it’s voluntary instead of mandatory. It’s meant for you to personally use to test yourself and improve. This is why it’s a forced solo instance, and why it always scales its difficulty to your current Prestige level.

The Platforms: what they are and what you need to beat them

First look at the following map, then we’ll highlight the three categories of tests you find in Nedder, and how to beat them. 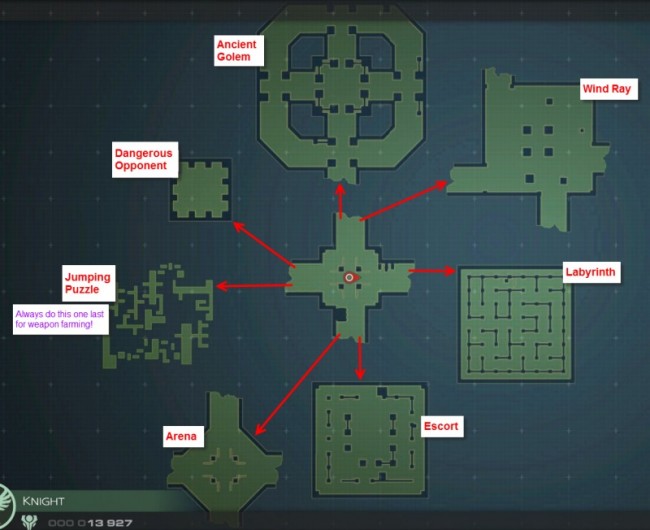 A closer look at each of the platforms, and what you’ll need to beat them

Note that you must complete 5 platforms, and the choices are somewhat random (although the jumping puzzle is always available). Because there are only 4 total platforms that are “easy” or “intermediate”, you must be able to beat at least one of the “acid test” platforms to complete this instance. If you cannot beat all 3 acid test platforms, pick the one that your class is best-suited to beat.

How to farm for class-specific weapons

You don’t actually receive your reward for beating 5 platforms until you finally jump back to the center platform after beating the 5th one. This gives you time to switch to another class before actually jumping back to center. Here’s what happens if you do this: