The purpose of this guide is to give a general understanding of Kinetic class, how to play, and what can you expect.

“Nothing can stop gravity, not even the gods. It is a force of great power, and those Immortals among us who are able to harness its power and put it to noble use are capable of changing the world for the better. More than anyone, these celestial beings understand that at some point as they face their enemies head-on, there may be nothing left but the laws of the physical world and desperate courage.”Asterius’s Encyclopedia.

Kinetic is one of four classes you can open within 3 weekly limits, relatively easy to play and able to deal huge damage. This is one of the most “damaging” classes in the Game. In most PvE situations, your enemies will be dead before they can reach you (or immediately after). If something went wrong – you Kinetic can break distance with enemies and use defense abilities. It makes Kinetic one of the best choices in PvE, and very suitable for PvP. I think, Kinetic is one of the best classes for open locations and solo adventures.

This guide will give the answer to the question: how to get to the first line?

So, what is special about Kinetic? Most of Kinetic’s abilities (except one) are ranged. HP modifier is one of smallest among all classes (the same as for Cryo, Necromancer and Warlock). Low HP is compensated with extremely high damage, moderate defense, and control abilities. Kinetic’s line of behavior is very straightforward: kill enemies faster, than they can reach you. Kinetic does not run away from mobs, he simply kills.
In my opinion, Kinetic is the ultimate class. Kind of activity does not matter: solo, group, open regions, PVP. It can clean dungeons extremely fast. Two Kinetics, two Alchemists and Lightbinder clean Daren Facility in 10 minutes or less, if no one is slacking :).
Similar to all other classes, Kinetic has its class-specific resource: Energy. The amount of Energy is displayed as purple bar below your heath-bar, maximum amount – 300.

Energy is used for powerful attacks, and normally regenerated with the speed of 10 units/sec. It takes 30 sec for full regeneration. If I’m not mistaken, it is the slowest regeneration speed in the Game.

Kinetic has 18 attack and defense abilities, and 20 talents. Any given moment of time, up to 12 abilities can be used and up to 8 talents can be active. Below is detailed description of all skills, if you know everything – you can skip this part.

Choice of required Abilities and Talents.

Before discussion the choice of Talents, I would like express my IMHO.

Energy Wave has little use. You don’t need to knock the enemies. You need to kill them. Possible use: to knock enemies that started to apply their special abilities (if those enemies are controllable).
Luminous Burst is nice skill; use it to engage enemy or escape.

We need to choose 5 Abilities from 10.

Kinetic has 3 ways of dealing most of his damage:

Demolition-way I will not consider at all, because of the lowest damage among all. Therefore, only 2 ways left: Stone Spear and Sledgehammer. Stone Spear deals smaller damage, but it is completely ranged way of playing and less stressful. Sledgehammer deals huge damage, but requires more attention. In solo game, this difference can be neglected. But in group or raid activities, you will be asked to switch to Sledgehammer. You should also keep in mind that mobs/bosses are willing to come closer to you, and if Sledgehammer is active, you receive less damage. The screenshot at the 1st page was made for kinetic with Sledgehammer. Also, Sledgehammer perfectly combines with the Element of Surprise, it gives huge advantage in first few second of any battle.

I would recommend Stone Spear for beginners, so that you can gain Kinetic-related experience. After that, you can switch to Sledgehammer. My choice: Sledgehammer. But I will give required Talents for both ways.

Finally, my Ability Panel looks in the following way: 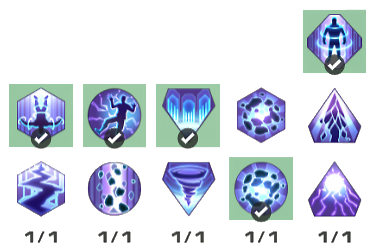 As you can imagine, the Abilities defines Talents. There is a difference for PvP or PvE.
Nevertheless, there are several “must have” Talents.

We have some free slots for Talents. First of all, Painful Charge is practically useless; the damage of Kinetic’s autoattack is too low. But you can take if you want. I usually take Centrifuge and Overload. I think, it is the universal choice for any PvE activity.
Choice of Talents and Abilities for PvP will be a bit different.

Therefore, one of possible choices in addition to “must have” set will be:

Now we should take a look as the Kinetics’s Atlas and optimize out path. First of all, we need abovementioned PvE Abilities and Talents, if you want to progress fast through the storyline. Kinetic’s Atlas has one junction in the first part, before Path of the Kinetic and several junctions after it.

Therefore, after passing Gravity Trap, we are taking the lower path for Stone Spear and Railotron, as shown above. After Path of the Kinetic, you need to take one step down for Principle of Inertia (red arrow with “1” on the picture below).

After that, follow the upper road: Quantum Collapse (talent, not ability) → Protective Shield. Protective Shield is a crossroad. Take one step up for Protective Circuit, then step down for Isolation and Seismic Explosion – our ultimate ability. On that way, you can skip taking Overload and Critical Mass; they are not needed for PvE. After these steps, you can continue the main route from Protective Shield to the right: Quantum Collapse (ability, we already took a talent with the same name) → Zero Gravity → Quiescence → Sliding Vector → Bouncer → Sledgehammer. After you unlocked all abovementioned abilities, you can continue in any direction.
To fully open class atlas after Path of the Kinetic you will need 8500 Sparks of Gravity/Evolution. You can save approximately 1150 Sparks if you will open only Ability/Talent nodes (~7350 Sparks needed), and skip stat-nodes. After opening all Ability/Talent nodes, you will open Kinetic’s symbol – Gravitational Perturbation, receive 2 slots for symbols, and class costume.

Our choice of Abilities and situation defines rotation of skills. I suppose that certain symbols are activated. At least “Gravitational Perturbation”, which gives +12% damage after Impulse charge.

Kinetic has very nice and simple AoE rotation for any packs with 2+ mobs/players:

4-5 Chain Gravitations is enough to eliminate 95% of all packs, even pack with 3-4 fat mobs, examples are: triple/quad packs in Tais Temple or Ardos monastery, all bear packs in Icy Winds Canyon or Thorneus’s Camp. There is a big chance, that pack with 2 champions (x4 lifebar, like the 1st pack after 2nd boss at Alakur) will require a little of attention after Gravity Anomaly + Chain Gravitation.

Single targets are bosses and minibosses. There are two separate tactics for Stone Spear and Sledgehammer.

If you are using Stone Spear, it would be nice to have it always charged before any heavy battle. Charge it using any small enemy. The difference in damage between Stone Blast and Stone Spear seems to be small – 2.5x and 2.58x, but with Railotron you will have 0.61×8=4.88x additional damage as DoT. Therefore, total damage of Stone Spear is nearly 3 times higher than the damage of Stone Blast.

Start of the battle for Stone Spear as a main attack skill:

Main rotation in the battle:

You will have excess of energy, use it for Quantum Collapse. Use Protective Shield when needed.

If you are using Sledgehammer, then within first 10 seconds of battle, you have a chance to decrease HP of any boss in solo adventure by 40-60%. If you are working in pair with Alchemist/Lightbinder, most likely the boss will be dead.

1. Approach the boss, he will not attack you immediately.

Many champions (x4 lifebar) will be dead. While Sledgehammer and Gravity Trap are recharging, use Gravity Anomaly + Quantum Collapse, Kinetic Pulse + Stone Blast. By the time of Sledgehammer recharge you should have 130-150 energy – enough for Gravity Trap + Sledgehammer + Protective Shield (if needed).

Use of Quantum Collapse can be difficult; some bosses want to stay to close to you. To kill adds, you can use Chain Gravitation.

There are several rules which will increase your damage:

I’m sure that you want to see difference between Stone Spear and Sledgehammer builds. I took boss with 1.5M XP as a target, the same set of symbols and Chapels, different build and appropriate primary weapon. In case of Stone Spear, it took 60 seconds to kill the Boss. The picture below shows damage from all used skills.

In case of Sledgehammer, it took just 20 seconds:

I think, difference is clear. Nevertheless, Stone Spear build is completely playable. You will have no problems in cleaning solo adventures.

There are numbers of possibilities and your behavior depends on the environment. For several close targets you can use:

If someone (Paladin, Slayer, Berserker, etc) attacks you in melee zone, and started his combo or tried to use class ultimate attack:

In any case, your actions in PvP depend on type of activity, who are your allies and enemies, where they are, do you have support or not, etc. You will need to practice and gain experience.

Choice of symbols and Chapels will depend on:

Selection of Chapels and Symbols for maximum damage.
There are several possible selections. Everything below is for Strength-Luck statbuild.

Actual choice depends on what is required more at the moment or gives higher yield. Bold shows my current selection. It also can vary for PvP, for example you can take additional Shield Power in Kesalia or Symerlis.

There are too many nice symbols. For attack (PvE) I would take:

In some situations, you will need to sacrifice attack symbols in favor of defense.

Jinx – Warlock’s symbol looks nice, it is DoT, but the damage is not high, 0.25x base damage every second for 6 seconds. Painful Spasm you can also skip, as well as Impulse Intensity. Shock and Wave paired symbols (2xShock and 2xWave), and Stolen Initiative are nice to have for PvP. Inertia-symbols also can give a profit, you can use Sledgehammer, Seismic Explosion or Quantum Collapse after Dash. Impact is “must have” for PvP.

In any case, PvP is always a balance between your own damage, ability to survive, ability to control other players and to resist control from their side. You will need to find your own balance.

If you will take a careful look at symbol’s list, you can see four symbols that increase efficiency of each of 4 primary stats: Impulse Intensity – Spirit, Maximum Recoil – Luck, Ultimate Strength –Strength, and Mobilization – Valor. But, there are only two stat-related DoT symbols: Lacerated Wound – Luck and Painful Spasm – Spirit. Two symbols are “missing”. If they will appear in future, than Strength related DoT in must have for Strength-Luck statbuild, and Valor-related for Valor-Luck statbuild.

Kinetic’s main weapon is the Reactor Core. There are 3 types, and you choice depends on your build:

Kinetic’s secondary weapon (offhand) is Kinetic Gloves. There are 3 types.

The last two are the most useful. Protective Shield offhand for PvE, and Seismic Explosion for PvE/PvP.

Choice of rings is determined by your statbuild.

Amulets are increasing damage of certain skills and always increase your Stamina. “Green” increase damage of one ability, “blue” and “purple” amulets – of two different abilities. There are 4 types of amulets for Kinetic.

Kinetic Pulse amulets are completely useless. Kinetic Pulse has too low damage itself. It is not our primary, or even tertiary damage. Therefore even +20% to its damage is also useless. Energy Wave amulets have the same order of usability. Quantum Collapse and Neutron Blast amulets add a bit of damage to the skills that are usually used, a bit more useful than two previous. Tramping amulets are much better. They can double your Tramping damage, the only problem – this skill is used mainly in PvP.