Welcome to Immunity Zones 101.  Today you will be learning what an Immunity Zone is and how it is supposed to work.

Let’s start with the basics.  How are cruisers, battleships, and other warships armored? 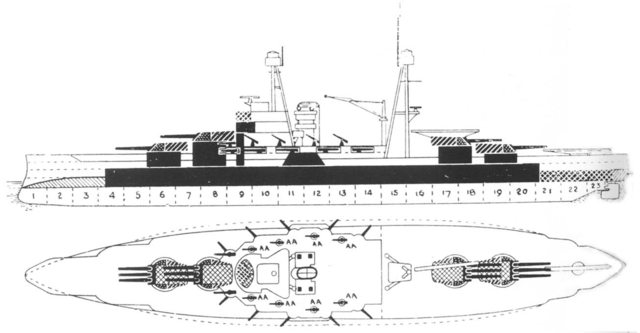 This is a schematic that shows the battleship USS Pennsylvania.  Specifically, this drawing shows the armored sections of the ship.  The thick black shaded areas are areas of the thickest armor, while the hatch marked areas are areas of thinner armor.  Now right away you’ll note on the side view that the armor doesn’t reach to the main deck.  It actually stops about 1 deck short of the rear of the ship and two decks short of the bow of the ship.  The reason for this is that steel armor is really, really, REALLY heavy.  As such, the armor is only protecting the parts of the ship that matters.  The number one portion of a ship that matters?  The waterline.  If enough water gets into the ship, the ship will sink.  So the waterline is heavily armored to protect it against shellfire.  Now you’ll note that the armor doesn’t cover the entire waterline from bow to stern.  The truth is, it doesn’t need to.  The amount of waterline being protected by the armor is enough to keep the ship afloat even if both the unprotected bow and stern are waterlogged.  Now the other main parts of the ship that need to be protected are the guns and the command crew.  You can see the barbette trunks going from the waterline armor up to the turrets, which themselves are heavily armored.  Likewise, you can see the heavily armored conning tower at the front of the bridge.  Lastly, and a bit oddly, you can see that the uptakes for the boilers and the bottom of the smokestack are armored.

Now as you can see, most of the superstructure is not actually armored.  Most of the bridge structure, the smoke stack, the top deck, and the secondary guns do not have any armor on them.  This is because, to be perfectly blunt, they are not vital portions of the ship.  These unarmored portions could be filled with holes and shot away, but it would still leave the ship in fighting condition, as the floatation and the main guns would not have been compromised.

Now that we have discussed the placement of armor on warships, we will now look at the specifics of the armor scheme and how they are integrated into the ship’s structure. 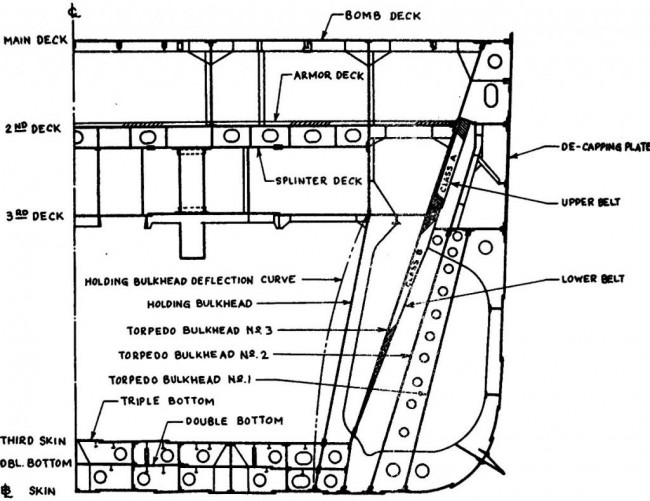 This is an example of the horizontal and vertical armor protection of an Iowa class Battleship.  As you can see, there are multiple layers of armor all working together to help protect the ship.  However, the most important parts of the armor protection when it comes to discussing the concept of an Immunity Zone are the belt and deck armor.  Belt Armor is the armor that protects the waterline of the ship, while deck armor sits atop the belt armor and protects the vitals of the ship from bombs and shells plunging in from long range.  An Immunity Zone is defined by how well the deck and belt armor work together to protect the ship.

Now, any armor will fail if hit hard enough.  However, the penetration of a projectile naturally drops as the distance the shell has to travel before impacting the armor increases.  This drop in penetration is at the core of the Immunity Zone concept.  To show how the Immunity Zone works, I will be using the Japanese Battleship Yamato as an example.

Now what this does is provide a “minimum range” at where Battleship Yamato can fight safely.  As long as Yamato is at least 20 kilometers away from the enemy ship, the enemy ship is unlikely to be able to penetrate Yamato’s belt armor.  This provides a Zone of Immunity where Yamato can fight without having its armor compromised.

However, the thickness of the belt armor is only half of the Immunity Zone equation.  The other half is the thickness of the deck armor.  As the range between the two ships increase, the angle at which shells must be fired in order to hit the target must increase as well to account for the pull of gravity.  As the angle the shells are fired at increases, the angle at which they fall in to strike the target also increases.  This is where deck armor comes into play.  As range increases, the chances of the shell hitting the deck armor instead of belt armor also increases.  What this means is that the deck armor has to be thick enough to withstand the impact of a shell striking it from a steep angle.

What this means is that there’s a maximum range at which Yamato can safely engage.  If Yamato gets into a long-range battle with an enemy ship, Yamato must stay closer than 35 kilometers to the enemy ship or else risk an enemy shell penetrating the deck armor and exploding in Yamato’s vital machinery.

When we combine this result with the 20 kilometer minimum distance the belt armor requires to defeat a shell, we get a range at which Yamato can fight without having its armor penetrated.  This combined result is Yamato’s immunity zone.  In Yamato’s case, the Immunity Zone extends from 20 kilometers to 35 kilometers.  As long as Yamato keeps between 20 and 35 kilometers away from the target, the target will find it extremely difficult to penetrate Yamato’s armor.

Likewise, this same formula can be used to express the range at which cruisers can safely engage enemy ships or the range at which an aircraft carrier will be resistant to enemy shells.  For example, The New Orleans class heavy cruiser has an immunity zone of 12,000 to 24,000 yards against its own 8″ cannons.

Now that we have learned what an Immunity Zone is and how it applies to warship’s armor, let us examine how Immunity Zones apply to World of Warships.

Yamato’s guns were capable of firing out to 41.8 kilometers in real life.  However, as of the writing of this document Battleship Yamato has a maximum firing range of 26 kilometers in World of Warships.  Basically, Yamato’s maximum firing range is much shorter in-game than it was in reality.  However, the penetration data of Yamato’s shells has not been compressed or shortened to match the shorter maximum range in-game.  As such, although Yamato can only fire to 26km in-game, its shells hit with the same amount of penetration they would historically have at 26km.  What this means is that instead of compressing the maximum range of the guns, World of Warships instead has placed an artificial cap upon the maximum range Yamato can fire.

Now what does this mean for Yamato’s Immunity Zone in-game?  It means that when compared to a historical Immunity Zone of 20 to 35 kilometers, Battleship Yamato in-game has an Immunity Zone of only 20 to 26 kilometers, with the outer edge of the immunity zone being artificially capped by the maximum range of the guns in-game.  Unfortunately, unless the artificial cap is removed, this means that all battleships and cruisers, including Yamato, will be unable to make full use of their armor as the artificial cap on gun range forces warships to fight with substantially reduced or even removed immunity zones.

I hope you have enjoyed this presentation.