There are a lot of questions about the damage in WoWs and it’s “randomness”. This guide will try to explain in details the damage mechanics in WoWs. The information below is provided by WG officials via the developers blog or forum posts on the RU server.

As you will notice the things are different here compared to WoT and WoWp. The reason is that ships are far more complex and not simply compact combat vehicles, but also floating military bases. Big parts of the ships are used for daily tasks and have nothing to do with the fighting efficiency. Damaging such parts won’t reduce the ship’s fighting efficiency represented by hitpoints.

In WoWs every ship is separated in sections with their own hitpoints dependant on their importance. If we sum the hp of all sections we will get value far more then the ship’s hitpoints we see in battle and the reason for that is to facilitate the destruction, as it’s not necessary to destroy every single thing on the ship to take it out of action. Half of the hitpoints are locked inside the citadel – the most heavily armored part of the ship protecting the engine rooms and the magazines.

Let’s take Fuso as example – the total hp in game is 57 100. The hull is separated in 4 sections (foward, aft and two middle sections) with combined hp of 42 800. The citadel holds 57 100 hp + there are various modules like steering gear, guns and the superstructure who also hold small amounts of hp.

Unlike in the mechanics of World of Tanks, armor here is not just a uniform barrier to be pierced, but rather a kind of multilayered “cake” that covers a number of construction elements and mechanisms, each having specific armoring. 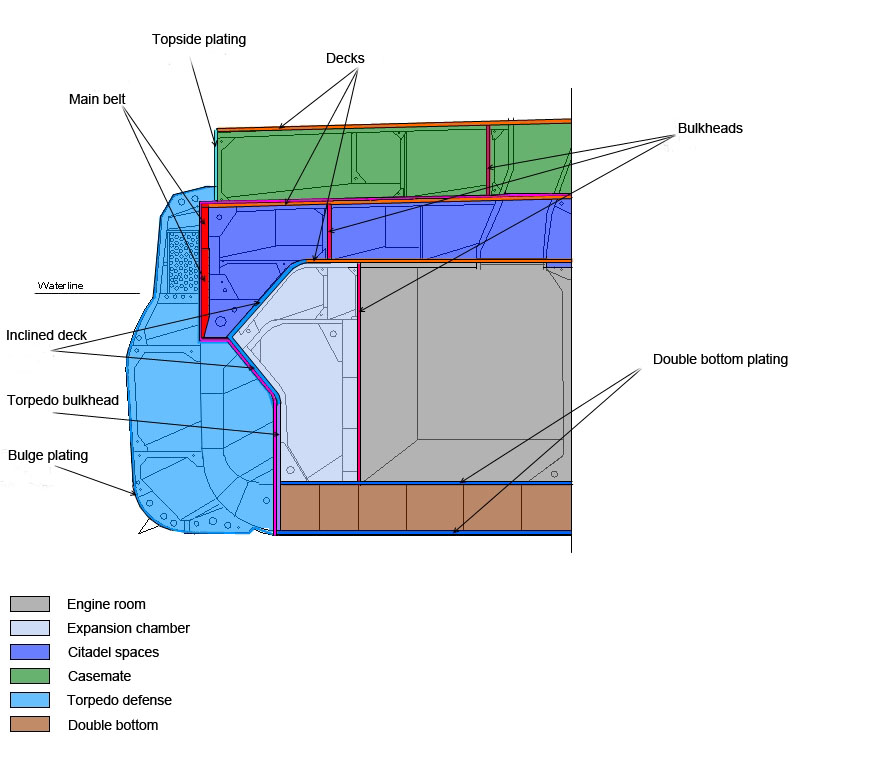 In order to inflict severe damage one requires not only to penetrate armor – it is crucial to hit the “right” place instead. These include areas where the vital sections and units are located, e.g. engine, ammunition chamber, armored box. The damage inflicted to tips (prow, stern) or the superstructure will almost always be less significant due to the fact that there are no vitally important elements. The issue is that such “right” places were commonly extremely well armored so the engine would take critical damage only after 3 or 4 armor layers (of different thickness) had been pierced.

The armor however is heavy thing, up to 40% of the ship’s mass, so there are enough parts of the ships that are light armored. For example cruisers can’t penetrate the battleship’s citadels from normal ranges, but they can systematically destroy the unprotected sections and lower their fighting efficiency (hit points).

Currently, there are two types of shells available in World of Warships – AP “armor piercing” and HE “high explosive”. AP shells are designed for delivery of a comparatively small amount of explosive charge through thick layers of armor. HE rounds are mainly used for hitting targets with larger explosive charges, through negligible armor. Generally, this mechanic resembles that of World of Tanks, but has some fundamental differences, like implemented fuze operation algorithms. Naval artillery pays serious attention to the moment of shell explosion after it has hit the target. The fuzes of HE shells are mainly of the direct action, impact type. This means that an HE shell will explode almost instantly after hitting any surface, independently of its thickness (even water). Fuzes for AP shells are designed in a different manner, ensuring charge detonation after penetrating armor of a certain thickness. This allows such a round to travel 10 – 15 meters deep into the target prior to its explosion and is to ensure that the shell will explode inside the crucial sections of an enemy ship (main battery turrets, ammunition rooms, boiler stations, engine compartments). If an AP shell meets no meaningful armor on its way, it may even easily leave a ship without having exploded at all.

Now let’s take a look at the armor penetrating itself. Armor penetration is a parameter of a shell that characterizes its capability to pierce a ship’s armor. A number of factors are considered in computing it: the shell’s weight, its impact velocity, the ratio of caliber to armor thickness, incident angle, target durability, and many others. Long story short: A shell’s muzzle velocity is always certain. Nevertheless, it decreases as the projectile travels (namely, air drag significantly contributes to it along with a number of other factors), and its kinetic energy also drops. As the firing range increases, you may notice that the shell’s trajectory changes, similar to its impact angle.

So it’s very important to pay attention to the angles. The shells will just bounce if the impact angle is too big and even if they don’t the armor will be slopped = increased effective armor thickness. 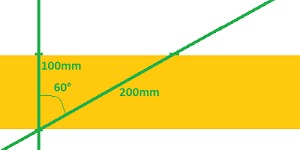 The HE shells can’t bounce, because they will explode on impact and deal some damage, but they can also break through small amounts of armor to deal maximum amount of damage. The HE shell’s penetration is ~1/6th of the calibre, so for the Fuso’s 356 mm guns it would be ~59mm of armor.

The angles are hower more important for the AP shells as they can bounce and don’t deal any damage at all. Here are the up to date values: 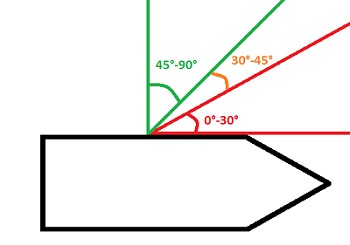 There are exceptions to this rule however as there is breakthrough parameter. If the armor (not the effective armor, just the steel itself) is less then 1/14,3 of the shell’s caliber the shell will breakthrough regardless of the angle. For the Fuso’s 356 mm guns that would be breakthrough for armor under 24.9mm.

The penetration however doesn’t guarantee meaningful damage. The AP shells have delay detonators in order to explode inside the ship after penetrating the armor and not before that. Each shell has different detonator threshold (~1/6th of the calibre) and delay that increases with the caliber. That’s the reason it’s not useful to shoot with high calibre AP shells against low armored targets.

The detonator is triggered by kinetic energy and it has to penetrate some minimal amount of armor in order to activate. Let’s use again Fuso as example. The detonator’s threshold is 59mm with delay of 0.033 seconds. With projectile speed of 775 m/s the shell will travel ~25 meters after the activation, but before the explosion unless there is meaningful armor to slow it down. So if the target is light armored the AP shell will simply overpenetrate and explode after leaving the ship or won’t arm at all if there is almost no armor on the target (like destroyers). 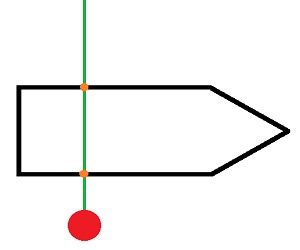 So in order to deal meaningful damage the shell have to explode inside the ship and there are two options. It will either be another battleship (in Fuso’s case) that is wide enough so that the shell doesn’t overpenetrate or the shell have to bounce while trying to leave the ship. That happens with BB AP shells hitting the cruiser’s citadel (the most protected part). 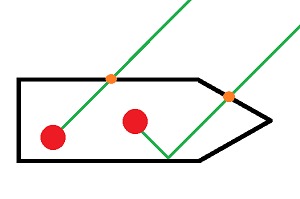 There is another nuance that can help sometimes – underwater penetration. After hitting the water the detonator will arm and the shell will be slowed down. The penetrating ability will be much lower and won’t be enough against other battleships, but if it’s light armored target like DD or CA the shell will explode inside the ship avoiding the overpenetration issue (most of the oneshots of destroyers and crusers from BB’s APs happen this way).

Now let’s talk about the damage itself. After the complex armor schemes and ballistics there is no need for RNG here and the damage is fixed. If you penetrate the citadel you will deal maximal damage (the one showed in the stats), so it’s 1X. Destroyers don’t have citadels, so the damage in the boiler rooms will be 0.5X. For all non-citadel penetrations the damage is 0.333X, but if that section was badly damaged already (visually dark) the damage will be 0.165X. Overpenetration is 0.1X. Bounce and unsuccessful penetration is 0 damage.

The same rules apply to HE shells too (well no overpenetration there), but they can destroy outside modules like secondary and AA guns with fragments in some explosion range, so they always cause some amount of damage (the modules have hp) even if there is no penetration. Citadel penetration with HE is possible against some CVs as the boiler rooms (under the stacks) are considered citadel.

There are of course other ways to deal damage too, so let’s talk about them. We have torpedoes, bombs, fires, floodings and it’s pretty simple.

The torpedo damage and chance of flooding depends on the torpedo itself and the anti torpedo protection of the ship. It progresses with the tiers where tier 1 ships don’t have any (so 0% reduction) and tier 10  BBs (best anti torpedo protection) have 50% reduction of damage and chance of flooding, the rest is scaled inbetween. The flooding damage itself also depends on the tier and it’s between 0.5% and 0.125% hp/sec. That mean that tier 1 ships will lose 0.5%hp/sec, while tier 10 only 0.125% hp/sec. There can be only 1 flooding. Destroyers take increased torpedo damage in the middle section of their ship, that’s why sometimes 1 torpedo from TB can oneshot them even if the max damage is lower then their hp pool.

The bombs act as HE shells, but the chances of fire are very high – near 100% for the same tier ship if it’s a direct hit. The fire damage itself is constant and doesn’t depend on the tier. BBs, CAs and DDs burn for 0.3% hp/sec while CVs burn for 0.4% hp/sec. There can be multiple fires – 1 for each section (so up to 4 for BBs and CVs) and the damage stacks. You can’t be set on fire again (restart the cooldown) if the section is burning already and the fires won’t spread to other sections alone. The chance of fire however will decrease with the tier progression, where tier 1 has 100% chance to be set on fire (the stats for each shell), while tier 10 ship will have 50% less chance to be set on fire. There is also “Fire prevention” perk that will lower the chance of fire by 7%. If the shell has 10% chance to start fire it won’t be 3% with the perk, but 7% from those 10. So 0.07*10=0.7 or 9.3% chance for fire instead of 10. If the fire is not put out it will last 60 seconds, but with the captain’s perk and ship’s upgrades it can be reduced to 43 sec.

I hope you will find something useful for yourself in this guide.

See you on the Battlefield