we all know there are AA guns on our ships and they even shoot down planes sometimes, but how are they working? Sometimes we see lots of AA fire, but we can’t shoot down any planes and we think that the AA is bugged or not really working. That’s not the case of course and I hope you will understand how is the AA working ingame after reading this.

First of all the AAA (Anti-Aircraft Artillery) is not working like the main or secondary guns on our ships! Simulating all individual machine guns on the ship will just overload the server without any significant gain for the gameplay. That’s why the AAA is represented as “aura” around the ship which will affect the planes inside it. There are different AA guns on our ships and they are split into up to 3 categories considering their range (long-, mid- and closerange guns). That means our ships can have up to 3 auras around them and they are overlapping, so when the planes get closer to the ship more auras will affect them.

We can clearly see the 3 auras around the Baltimore:

Now the same Baltimore with all 3 auras and the dps based on the distance as the auras overlap: 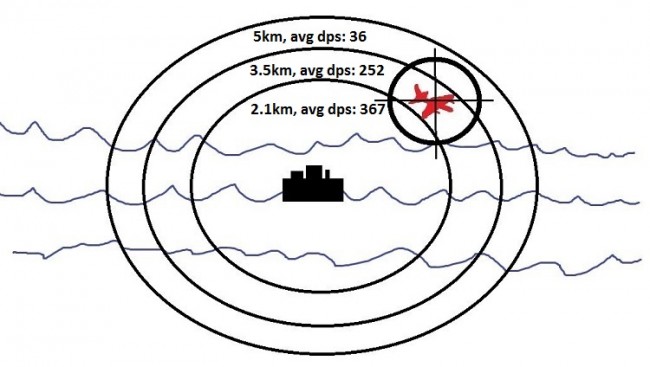 We know the range and the avarage damage per second, but if we want to become the enemy CV’s nightmare we can enhance our AA aura even more.

There are two possibilities – range and dps. For both range and dps we have 1 captain’s perk and one upgrade for the ship. 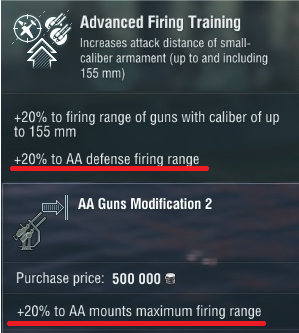 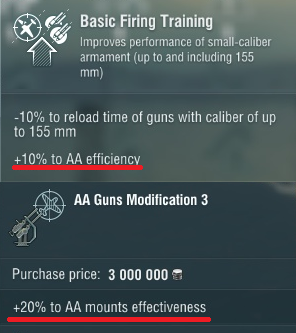 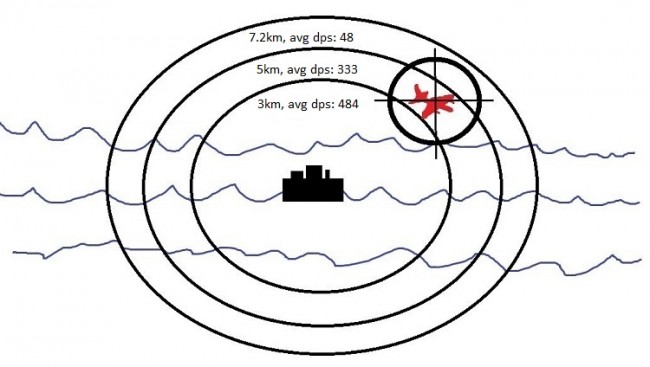 As you can see the AA power can be vastly increased if the player is specialized in this direction. And that’s only the ship’s “base” AA power, it can be further increased during the battle if you:

1) Focus on specific squadron by holding “Ctrl” and left-cliking on the desired squadron. This will make all auras (if the squadrons is in range) shoot only at this selected squadron and the damage to that squadron will be increased 1.5 times!

2) Some cruisers with 2+ DP guns have active ability (AA barrage) which they activate with “Y”. During the duration of this ability the long range aura will get it’s avarage dps increased 6 times and the planes inside this long range aura will enter “panic mode” (even if they are not attacked), which will decrease their accuracy.

3) 1 and 2 can be combined so the avarage dps inside the long range aura will be increased 9 times.

This maximal AA power will look like this for the focused squadron and with activated AA barrage on the fully AAspecialized Baltimore: 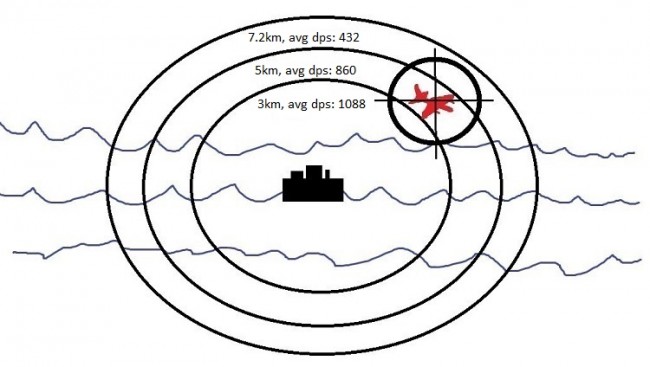 Note: It’s also important to say that those auras can overlap with other ships too. They still act independently however, every ships fights “his own war” with the squadrons, the damage is not summed.

Now let’s imagine the Baltimore is attacked from Essex’s Douglas AD1 TBs. To make it worse for the Baltimore we will say that the captain got amnesia, the player can’t afford AA upgrades, the AA barrage is on cooldown and the “Ctrl” key on the keyboard is broken. It will look like on the first picture:

This squadron is composed of 6 planes and every plane has 1960 hp. It is ~3km away from the ship and is taking avarage 252 damage per second. In theory it should take ~47 seconds to kill the entire squadron or 1 plane every ~8 seconds. That’s not the case in reality, because:

– it’s avarage damage per second. There is still RNG involved and the damage is fluctuating. Different guns have different cooldowns. The DP guns fire once every 5 seconds, so they deal the long range damage x5 (+/- RNG) and don’t deal any damage for the next 5 seconds. The midrange guns deal damage every 0.5 sec (half of the dps showed +/- RNG) and the close range guns shoot every 0.1 seconds, so the damage get’s more constant when entering the mid- and closerange auras.

– everything is constantly moving in the game, so the planes will switch between the areas.

So knowing this the CV captains can plan their attacks and calculate the expected losses, while their targets can realise what kind of defenses they have against those nasty “clickers”.

Now few words about what’s NOT taken into account:

– The position of the AA guns and their firing arcs. It just doesn’t matter from where is the plane comming, the avarage dps is constant inside the aura.

– Squadrons don’t have their own hp ingame – there is only squadron and ratio of alive/killed planes. If the squadron survived it’s encounter with the AA and no planes got shot down the damage taken is not “remembered” – when under attack by AA again it’s considered to be full health as the planes were not damaged in the old barrages.

– The AA fire animations have nothing to do with the effectiveness and hitting planes, they are simply visuals.

Note: All values in the pictures are for undamaged ships. During the battle those guns are taken out by shells and bombs, so the AA power can be severely decreased.

The 0.4.0 update added float fighters for tier 4+ cruisers and high tier battleships. They are not part of the ship’s AA and won’t attack the target you focus for the AA guns, it will choose for itself and will always attack the most dangerous strike squadron.

See you on the Battlefield.