Welcome all you aspiring new commanders! This here will be my guide to starting out in Fractured Space, and will hopefully contain all the basics you need to know to get right into the game.

When you first launch the game, you are greeted by the Hub window. This currently includes a news feed, an out-of-date Youtube video game explanation, and several other useful bits of information.

Along the top are six tabs, giving you access to different windows. Next to the Hub tab is the Tech Tree. This is how we will be able to access new ships and upgrades in the future, but for now everyone will have full access to all the ships and equipment curently in the game. If you see a ship listed in the Tech Tree but can’t play it, that’s because the Dev Team hasn’t currently finished making the ship, so don’t fret.

Next is the Hangar screen. This lets you select which ship you’d like to launch a match in, as well as adjusting your current loadout. For additional information on weapons and ability descriptions, check my Loadout Guide. While you can change your ship while waiting for the match to start, you cannot change once in-game, so be sure to choose accordingly! Additionally, this is the only opportunity to select your loadout, so be sure you’re ready to go with the equipment you’ve got selected before you hit Launch.

Clicking Launch will bring you to the list of available servers. There are currently THREE server regions: EU, US East, and US West. Each server will indicate how many players are currently on the server, as well as if the server is still in the pregame Warm-Up phase or In Progress. Additionally, you may choose to join a server as a spectator, using the Join as Spectator button.

After the Hangar is the Leaderboard. This shows the top community members across various metrics, and lets you know how you’re doing against the leaders. Don’t get too discouraged if you find yourself lagging far behind, as the Devs will reset the leaderboards periodically.

Next we have the Store, where players can check out available account upgrades, as well as purchase premium items such as ship skins and crew members.

The last tab is Options, where you can change details such as Audio and Graphics. Do note that you cannot lower the graphics settings while in a game, so do your best to pick a setting you are confident your system can handle.

Getting into a match

When you first enter a match, it will either be in-progress or waiting for all players to ready up. During ready up, all players are able to switch their ships by pressing F1 and using the arrow keys to cycle through a menu on the left-hand side of the screen. Pressing the space bar will switch you to that ship and cause you to respawn at base. A match can begin with at least 2v2 teams, so long as the majority (to a minimum of four players) have indicated they are ready by pressing “R.” Once this happens, players will be assigned teams based on their overall earned experience. Once teams have been selected, they may be adjusted by players during the countdown by pressing the “F4” key. Doing so will place you in the queue to switch teams. If your team has at least 1 more player than the other, or a player on the opposing team also queues to change teams, you will be switched to the opposite team for the remainder of the game.

When a match begins, each player spawns in their currently selected ship at their base. To jump to a new system, hold down the “5” key to bring up the Jump widget, select a destination that is not colored red by moving the mouse in the direction of the jump location as displayed on the widget until that location lights up, and release the “5” key. Be wary when using the Jump key; you cannot cancel a jump at this time, and while attempting to jump your ship will take quadruple damage!

While the end objective is to capture the enemy base, you are far from strong enough at the start to do so. In order to upgrade your ship, your team will need to earn resources. Resources are accumulated periodically by controlling Mining Stations (indicated on the minimap by white, red, or blue circles with no lettering), three of which are located in Alpha and Beta sectors, with another two in each team’s base. Mining Stations look like this: 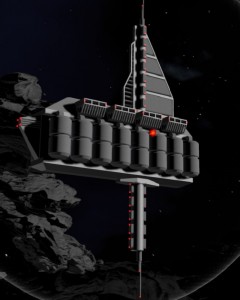 To capure a Mining Station, simply move your ship into the zone of control around the location. If there are no opponents in the same zone, you will begin to capture the Station. If there are opponents in the zone of control, the game will add the total value of the attacking team’s capture power, and subtract the defending team’s capture power. If the result is positive, the attackers will begin to capture the location at the new capture speed. If the result is 0 or less, the capture attempt will be halted. If the zone is neutral, the team with progress towards capture is treated as the attacker. If at any point there are no attackers in the zone of control for a location, and a defender is present, the capture completion is returned to 0. Be sure that if you are attacking you do not accidentally fly outside the zone of control unless you have to. 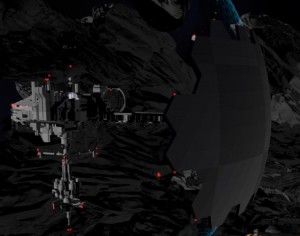 At the far ends of Alpha and Beta sectors are Forward Bases (A1, A2, B1, B2). These bases serve a critical role in the progress of the game. While they do not provice the controlling team with a resouce income like Mining Stations, they do serve as repair and upgrade centers, inhibiting the enemy team from Jumping to that Forward Base from Gamma Sector, and to prevent the enemy team from being able to jump from that sector into your Base. Forward Stations can be captured the same way as Mining Stations, but do take moderatly longer to do so.

As your team reaches set resource levels, your entire team will be able to upgrade. In order to upgrade your ship, you must simply enter the zone of control of a friendly Forward Base or your team’s Base. Doing so will instantly improve your ship, improving all your ship’s abilities, weapons, speed, capture rate, and health. If you are not sure if you have an upgrade pending, you can check the bar along the top right of your screen. If the first number and icon has the words “Upgrade” beneath it, you have an available upgrade for your ship. Your ship’s crew will also give you audio clues to let you know when an upgrade is available, and will also periodically remind you to go “pick up that upgrade.” 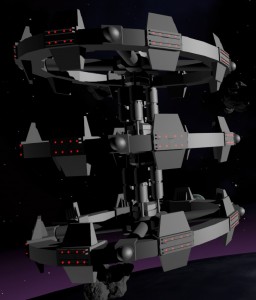 Once 8 minutes has passed in the game, the Gas Facility (G) becomes available for capture. At both 60 and 30 seconds before the Gas Facility becomes available, all players will recieve a message near the top of the screen informing them how long remains until the station becomes active. At 10 seconds until the Gas Facility goes active, each player will get a third warning, along with an audio countdown. At the end of the countdown, the Gas Facility can be captured the same way as Mining Stations and Forward Bases, but takes far longer to do so. Once captured, each surviving member of the capturing team is given a buff, and the Gas Station will becomes inactive for 5 minutes. The buff comes in three tiers, Gas Power I, II, and III, with each tier becoming more than twice as effective as the previous version. Gas Power will provide you with all the same perks as leveling, with the exception of hit points. An additional note: you may only Jump from Gamma sector to the Forward Base on your side of that sector, or the Forward Base on the enemy’s side of the sector ONLY if your team has control of that Forward Base 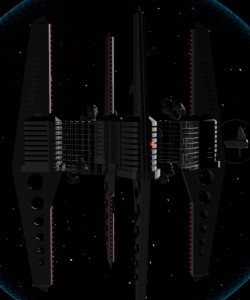 Once your team has control of a Forward Base on the enemy’s side of a sector, any teammate in that sector may Jump into the enemy sector (E). Once at the enemy Base, your team can begin capturing the locations as though it were a Mining Station, with a few differences. First of all, the Base deals a set amount of periodic damage to your ship just for being in the zone of control . Secondly, a Base’s capture rate CANNOT be reset. This means any progress that has been made on a Base will remain throughout the game, and cannot be removed. Lastly, just as with Forward Bases and the Gas Facility, a Base’s capture take FAR longer than a Mining Station, upwards of several minutes without high levels and additional effects like Gas Power or CapMod (Enforcer ability).