This guide will be about Ronin/Brawler with EVA build. I’m not implying that Ronin/brawler is better or worse than its counterpart Brawler/Ronin, but just teach some basics about this class combination for those who need a guide to start.

Even though people associate EVA build with PVP, in fact EVA is very good in PVE. Sure you can’t dodge red lines with EVA, but in high level dungeons where mobs hits hard and applies debuffs, EVA works wonders. When you dodge a hit, it’s like having 100% damage taken, because you took 0 damage. No other build can lure better than EVA users.

However, in order to make EVA build work, you need GOLD . Since the maximum EVA you can achieve is 95%, you won’t be able to dodge all the hits (and against higher level monsters your real EVA is lower than what it’s shown in your Character status) if mobs manage to hit you and you don’t have high DEF nor HP to withstand, you are useless. And some bosses have some decent ACC, plus Red carpets ignores your EVA. So don’t try this build if you cannot fortify your gears or else you will make Ronin class a Duelist 2.0.

Why not Wizard Sub?

With wizard sub you get ranged skills, more AOE and AOE stun, combo skills, nice buffs, etc. And you can cap EVA since their weapon has this stat.

Even so, I did not choose Wizard sub because I like lvl 60 Analisa Katar more compared to lvl 60 staffs, apart from more HP. Lvl 50 orange staff is good, but you lose a lot of base stats. Plus you can only get one Combo skill without wasting your envoy points unlike the other two.

These are my combat stats (without deffensive posture and floats). I don’t have +20 weapon yet, Top set is +15 and bottom set +9 only. And I haven’t decided which Acc set to use yet. 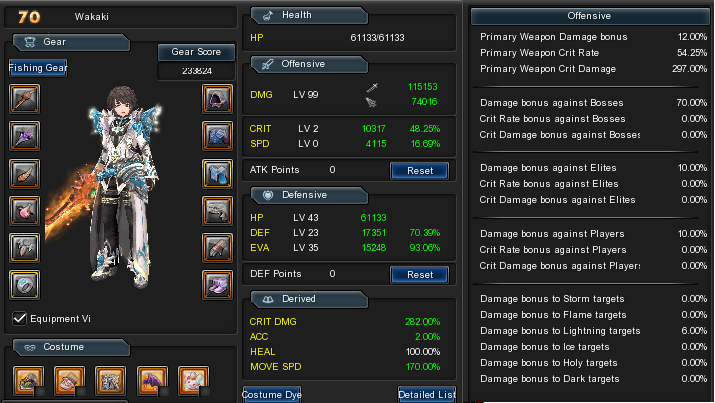 Try to reach 50% – 60% CRIT in combat and put all your offensive points in Damage.

You need to cap EVA at 95% with Tale of Sword buff (and Eidolon star buff if you decide to use Kotonoha or Aelius). I wouldn’t rely too much to cap EVA in Soul Blade buff, because if your soul bar is empty, you won’t have cap EVA during that time.

Then I can put the rest of points in def/hp. Having 17k DEF points is enough for OW. But if you want to do dragons, try to get at least 18-19k DEF with Guardian buff and ballad.

This is an example of Envoy Path for lvl 69 (23 envoy points). But it’s not set in stone, so you can try other paths. 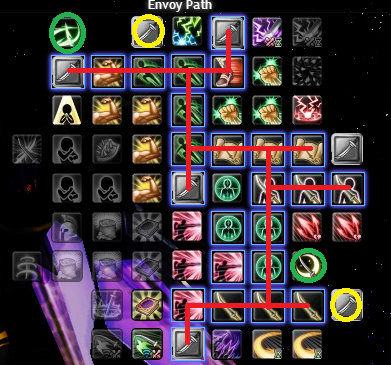 What I believe it should be a Must Take nodes are:

Sacred Dragon Slash: Brilliant Dragon Flash +15% and it makes this kill a Gapcloser.

Steel Body: Increase Hp up to 25% of your CRIT.

You can put the points in Tachi studies in Battle Tactics or Weak Point Analysis if you can cap cDMG with eidolon/party buff/foods or you manage to +20 Devourer set.

Green circles are the 2 Combo Skills to take.

Gale Combo. It’s an AOE skill that it’s very useful when you are luring mobs.

Crescent Assault. The Combo Skill with the highest damage.

If you don’t want Combos, you can skip them and take Infinite Waltz and Soul Breaker.

Infinite Waltz: “40% chance to deal damage to enemies within range when you evade”. It offers a nice boost in your Damage output, since it may proc from each hit you dodge and each proc does AOE damage to all your surrounding enemies, although the range is small and sometimes elite mobs outranges the area of effect of this passive.

IV. SKILLS
I recommend you to read this post about Skill amplifiers in order to understand the % I put on every skill.

Soaring Flash Dance (2s CD). 125% Skill Amplifier. I mostly use this skill to lower Boss’ DEF with Soaring Flash Rond. You can increase it’s range by 5m if you use Indigo Soaring Flash.

Soul Blade. Once you activate this, it’ll consume 5 souls each second but will boost your Damage and EVA, and giving -20% damage taken. Fully charged Soul bar will last for 20 seconds and will allow you to spam Soul storm.

Dark Spear Raid. 110% Skill Amplifier. Dark Element. This can be spammed 3 times in a row, does linear AOE damage and applies DoT that can be stacked 3 times. DoT lasts for 10s, but you cannot recast this skill in 8s due to the debuff you get and can’t be lowered by SPD. I would stack 3 times this DoT and try to use once to refresh DoT duration.

Iaido (10s CD). 160% Skill Amplifier. It works like Bow charging skills. I only try to fully charge Iaido before starting a boss fight. During fight I would just release uncharged Iaidos for the +10% damage buff it gives. This buff is actually OP, because it increases your damage against Bosses, Elites and Players instead of your base attack damage. It lasts 5s, so I try to use Dragon’s Fury and Brilliant Dragon Flash after that in order to make better use of this buff.

Dragon’s Fury (8s CD). 185% Skill Amplifier. Ronin’s highest damage skill. It’s a gapcloser that heals you for 10% of damage dealt with this skill.

Swift Strike (6s CD). 145% Skill Amplifier. Storm Element. You can fit this skill in your rotation and lower enemy DEF.

Blitz (12s CD). 130% Skill Amplifier. I use this skill when I’m luring or I need to stun Boss before he tries to hit me, since it stuns immediately.

Inner Strength (18s CD). 8% Heal. When you need some emergency heals. Also, with Swift Strike and Electrocution it boosts your crit stat with 2-3 earth charges.

Electrocution (12s CD). 135% Skill Amplifier. The damage buff it gives is worth to include this skill in your skill rotation.

Lotus Strike (30s CD). 225% Skill Amplifier. I don’t usually use this skill due to its long CD and 1.5 GCD, but it comes handy when you need to do single target damage and all your other damaging skills are on CD.

Pre lvl 50: Whatever you get from quests

Tachi of the first Village

Those 2 weapons are easy to get by spending Tokens in Navea. Meira Katars has a hidden 2% nocturnal passive so you don’t need to spend gold crafting a nocturnal weapon.

This set offers good defense, Damage reduction and EVA. But bottom set can be changed into Aria set if you want more damage.

I prefer this set instead of Nazrudin set because you get more HP and DEF but less EVA.

Here’s the main reason why I chose Katar as sub. They offer 20% damage against Bosses and 70% Crit Damage proc, so you don’t need to look for Destroying SS.

For tachi I recommend crafting it with either Shocking (2s Stun), Destroyer (-10% DEF) or Protector (-15% DMG) Vengeance Cores. Of course with Fire element.

For katar put a Nocturnal core in it. Having high % in these Katars makes Inner Strengh heal a little bit better. And about element, either Fire, Storm or Lightning.

This set makes you a Boss killer. You can get up to 60% damage against bosses, 74% with ss and 84% with Iaido buff. Later when we receive melee buffs, we will get another +15%.

However, if you are not tanky enough,

Malodnak’s Ring of the Lich

These weapons have higher base damage value and higher %. But they only do more damage against normal mobs and elite mobs while against Bosses Beholder will do more. I would only change for these if it’s +135% and Fire/Storm element.

I don’t like lvl 65 gold armors for what I want to do. Lethal Beast set and Lion’s Roar set don’t give EVA, so you will have to put a lot of stat points in it. Also, you lose 15% damage against bosses. But if you really want to change bottom part, I would recommend going for Lion’s Roar set. Lethal Beast is better for HP builds.

Survive and adapt set makes you very tanky and you can cap EVA. However, you lose 15% damage against Bosses and a lot of CRIT.

If you cannot afford this set, just stick to lvl 55 one.

Aelius 5% Move Speed, 5% EVA (although his 3 star form will arrive after Kotonoha’s, so I prefer her).