Hey guys, I’d like to share the deck I played last season. Its closest cousin is probably freeze giants.

I almost never see anyone play it, or any variants of it. So IMO it’s extremely underrated.

Disclaimer: This isn’t a godly deck or anything. But at my best point in last season, I got to 5 star rank 1. So it’s certainly viable. It was an extremely hard deck to play though. Especially considering the number of hunters in last season.

The Deck I Used: 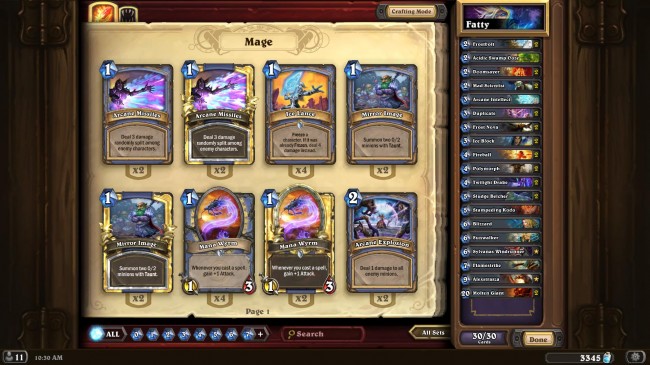 The Gist of the Deck: Duplicate Huge Dudes. Burn through your opponent’s solutions. Molten giants for tempo swings. Doomsayers are still OP. Usually win in the ultra late game.

Why I Love This Deck: Mindgames. Almost nobody ran this deck last season. So opponents usually are stuck wondering: Is he tempo mage? Is he freeze mage? Not quite either!

You don’t run mirror entity or counterspell, so you can trick your opponent into wasting time playing against those by faking tempo.

Downside: Mindgames don’t work on face rush decks =(. You can’t game that which has no mind apparently.

No Mountain Giants: I was up against 35% hunters last season? Mountain giants were just too slow. Even against control they were awkward. Because you want to cast duplicate before you drop a MG. But then you increase the cost of your MG.

Meta Picks: I won’t go too much into detail about the meta picks. I ran singles of non-essential minions because duplicate can always give you more of something. Swamp Ooze self explanatory. Every deck except miracle rogue had 2 cost minions last season, so kodo was a nice card. Not great, just nice. And Sunwalker was a more reliable substitute for mountain giant IMO.

How to play/play against: Control Warrior

Control warriors are free wins for this deck. Your first few turns are identical to freeze mage. So the control warrior will often waste turns armoring up. Surprise, you don’t care about armor because you kill with minions, and not burn cards.

You can duplicate more huge threats than they can remove. And brawl refills your hand through duplicates.

If you’re a control warrior, how do you play against this? Well the key is recognizing that you’re going up against this deck. Freeze mage will NEVER use frost bolts for removal. Once you know, you need to hit face as often as you can afford, and avoid triggering duplicate at all costs.

How to play/play against: Priest

This deck is very favored vs priests. BUT at the same time, priests are usually the most savvy players in the ladder. 9 times out of 10 in the upper ladder, they’ll know you’re running duplicate, and will play around it effectively.

But if you can duplicate your twilight drakes/sunwalker/sylvanas, you just run away with the game. Too many 4 attack minions. I mean sure sylvanas isn’t a 4 attack minion, but she’s powerful enough on her own that she’s just as valuable.

In my experience, priests will thoughtsteal in desperation for polymorph. In order to duplicate some sheep for you. If your opening hand is solid, you may want to not mulligan that polymorph. It’s a decent card and you deny it to the priest. Once you setup your board, this is one of the priest’s only outs.

Priests have 2 strategies they will attempt to use on you. Either kill you with fatigue (because that kills you through your ice block) or bum rush with tons of minions, and often with auchenai zombie chow combos. If the priest is attempting the fatigue route, expect many huge end game minions such as Ysera, Ragnaros, etc. So keep pressure up, conserve your solutions to massive threats/MC, and maybe even skip on your arcane intellect.

Also, priests run at most 1 silence, and rarely run shadow word pain. So doomsayers are good. I usually aim to kill 2-3 minions per doomsayer. They are just so godly in this matchup. Just beware of hipster priests. Identify them early so you don’t play a doomsayer just to get it mad scientist’d.

How to play/play against: Miracle Rogue

A reasonably favored matchup since Miracle rogue usually doesn’t play anything the first 2 turns. Giving you time to setup the duplicate combo.

Remember, Rogues have Sap. Half the time I lose, it’s because it’s turn 5 by the time I setup sludge belcher duplicate. Then he saps turn 6. Then saps again turn 7. Then I’m dead. So always keep tempo in mind. Drop your minions even if you don’t have a duplicate to back it up. Saps are one of the miracle rogue’s outs and you need to burn them out early.

The other out for Rogue is running a variant that has a bit more steam. IE violet teacher, Malygos. Anything that could boost the value of the rogue’s remaining cards.

How to play/play against: Various Mages

Freeze mage: You are favored thanks to your ice blocks and Alexstraszas. The kodo counters doomsayers really well, so always save them. You can maintain pressure while they run out of steam.

Tempo Mages: All of them run mirror entity basically. So put your doomsayers to good use. Keep the coin if feasible to probe counter spells. And prevent as much damage to your face as you can. Oh and polymorph to play around duplicates. And don’t setup flamestrikes. All of these tempo mages run Loatheb, and will know to block flamestrike. You have good cards to deal with their secrets, and as long as you can do that, you can beat them.

How to play/play against: Handlock

Handlocks are a tough matchup. And it boils down to their tempo swings. You have more minions they can deal with, but if they drop 3 giants suddenly, you’re usually dead because they have tons of cards to deal with doomsayers. Avoid attacking face if you’re vulnerable to a molten giant tempo swing. If you have board, it’s unlikely you’ll lose to anything but that.

Finally always beware of massive burst as well. Even if you manage to secure the board and tempo, they can potentially swing in for hellfire/hellfire/soulfire/soulfire combos every now and then. And that’ll work because you probably delayed your ice block to seize tempo.

How to play/play against: Zoolock

Zoolocks are just luck of the draw. If you draw molten giant, freezes, and ice blocks, you can often just win no matter how many minions they set up because you can counterswing for massive damage. If you don’t, you’ll be forced to play a taunt/trade game, which is much less favored.

How to play/play against: Hunter

This deck is extremely unfavored vs hunter. You’re only going to win in 1 way. Molten giant tempo swings, followed possibly by alexstrasza heal.

Do everything you can to prevent damage. Fireball -> Huffer is often essential.

Against a competent hunter you’re almost never going to win. You can still manage a ~30% win rate though, even at high ranks, just due to misplays from hunters. Just how things work out.

How to play/play against: Shaman Shamans wreck this deck very hard. Almost as hard as hunter. Earth shock kills your azure drakes. Hex beats polymorph. You lack the small minions to whack his totems. And he has at least 4 solutions for your doomsayers, if not more.

Get your totem wackers out early if possible. Don’t do duplicate plays, they will probably get countered. If you are duplicating anything, duplicate your mad scientists or ooze, so you can have the extra totem wackers. And if you’re going to win, expect the win to come from a molten giant tempo swing.

This is basically a really really REALLY slow control mage deck, that I found to be surprisingly viable. I changed ~5 cards from the versions of this deck I saw once or twice from other players about 2 seasons ago.

I love it because it’s a very mindgamey deck. Your first few turns can be identical to freeze or tempo mage. But plays that work on either of those two, will not work on you.