Playing the position 1 role is one of the most crucial roles in Dota. They carry is intended to out-farm the rest of the players in the game and ultimately bear the responsibility of victory. This does not mean that the carry is the most important role, Dota is a team game so treat it as such! Position 1 simply means that they have the highest farm priority.

Throughout this guide I will aim to teach you the fundamentals of playing position 1, from choosing the most appropriate hero at the beginning of the game to finally taking the enemy throne! It should now be mentioned that there is never one right skill build or item build for a carry (or any other role), but ♥♥♥♥ let me tell you right now that there is always a wrong build, for obvious reasons these should be avoided.

Sure Dota should be played to have fun, but winning is pretty fun too right? Right. When playing the carry role communication with your team is absolutely key to increasing that GPM/XPM. Please keep in mind that this guide was originally made during the 6.82 meta game, which is focused mainly on late-game hard-carries, split pushing and objectives (towers/rax).

Hopefully this guide has given you some sort of insight into becoming a better carry player. For those interested I will be making guides in the future for individual heroes on my YouTube , so feel free to subscribe, or you can follow and watch me play live over at Twitch

All and any feedback is welcome, thanks for taking a look!

Each carry oriented hero has their pros and cons and is always situational to when they should be played. Just because you ‘want’ to play a certain hero doesn’t mean that choosing that hero is the best idea or the best hero for your team.

A lot of people might be against it but the easiest way to choose which carry you’re going to play is to simply counter-pick, but keep in mind this shouldn’t be the only thing that determines your hero.. As mentioned earlier the current 6.82 meta is mainly revolving around split pushing (eg. Anti-Mage, Spectre, Terrorblade, etc.), late-game hard carry’s (eg. Anti-Mage, Spectre, Phantom Assassin, etc.), and tanky heroes (eg. Wraith King, Morphling, Spectre, etc.), and should be chosen accordingly depending on the rest of your teams picks.

3. Your Selection of Carry Heroes

But how will I know when to pick the appropriately styled hero? Let me try to explain. Each role can be explained here, so I will briefly examine heroes for particular carry style roles. Also, keep in mind that many heroes may fit into more than one role, so choose accordingly!

Do you need a?
Late-Game Hard Carry –

This is basically a 4 protect one strategy. If you team has decent team fight capabilities and various ways to ‘create space’ allowing you to progress into the late-game (>45 minutes) it is usually the best idea to pick a Hard Carry, as opposed to semi-carry’s. Below is a list composed of heroes that I believe can most appropriately be played in the Hard Carry position, in alphabetical order:

I heard split pushing was a nice way to get farm?
Carry/Split Push –

Ideally, whoever the carry is, should be split pushing. This effectively ‘creates space’ in order for your team to find pick offs and objectives while you are getting farmed for the late-game. Of course there are more suitable heroes for this situation, ie. Those who quickly push lanes or have escape mechanisms, including:

The potential for an early game impact!
Carry/Gank –

The more ganking style heroes are great for early pick offs for free gold with the ability to also effectively farm creeps. These heroes are great for early to mid-game rotations (TP ganks) while also scaling reasonably well into the late-game. It should also be noted that unsuccessful rotations with these heroes will slow down your ‘snowball’ effect, actively slowing your late-game potential:

It is never a bad idea to participate in team fights, especially with decent AOE. After winning team fights, if possible, it is always to try and push for an objective. Tower kills and/or Roshan are extremely effective ways in boosting gold and experience, but use your own judgement for overcommitting. What’s the point in overcommitting to a T2 or T3 tower and getting wiped when you just extended your lead by 2k gold and 3k experience? Sometimes it’s good to be greedy, just know when to stop. Carry heroes with team fight potential include:

Hopefully these lists are constructed well enough to understand different types of position one heroes and when to play them.

Last hitting is the most important thing to do as a carry, if you don’t last hit creeps your item progression will be slowed, ineffectively allowing you to progress to the late-game. Again, it should be noted that your decision making of when to farm and when to fight is of the utmost importance in maintaining a decent last hit/deny ratio.

By familiarising yourself with these questions you will progressively increase your GPM/XPM and hopefully carry your team to victory. I will try to answer these questions in a broad sense.

As talked about previously the best way to pick is to counter pick, so choose accordingly. There is not a lot of sense in choosing Drow Ranger if the other team has Clockwork or Faceless Void, you will get initiated on if slightly out of position. Something like a Naga Siren, Morphling or Wraith King would be more appropriate to survive and engage a team fight or to disengage completely.

Early game item build can determine the outcome of your lanning phase. If you are sustaining a lot of harassment then buy a poor man’s shield, if you have uncontested free farm buy a quelling blade. Boots of speed are always a good idea to pick up after a quelling or poor mans, but isn’t always the case, eg. Weaver can usually skip boots until a major item is complete as Shukichi provides adequate movement speed. Your first major item should be something of great benefit to your hero, eg. Battle Fury, Linken’s Sphere, Blink Dagger while also keeping in mind that all items can be situational.

Like item builds skill builds can also be situational, and even as though there is no one correct build, there is definitely is wrong ones. Make sure you know what your skills do and make the appropriate decision from there. Remember that it’s not always a bad idea to get your teams opinion, and holding onto a skill point or two while you make a decision won’t hurt you either.

If you can keep a close eye on your own level and last hits as well as enemy levels and items, making the decision of farming or fighting should come easily. If you are under-levelled and under-farmed there isn’t always much point in TPing to another lane to help out (unless you have decent ganking ability and/or your team is getting dived), a lot of the time it will be more useful for you to continue to farm and take towers. However, if you are of a reasonable level and have a reasonable amount of farm to make an impact and suspect a full team fight will break out, by all means TP to help your team. Use your own judgement, but it does take practise. One bad TP rotation can potentially lose you the game. Creep equilibrium also plays an important role in every lane and should be maintained just outside your tier 1 tower to maximise last hitting during the lanning phase.

A farming pattern is a path you follow in an attempt to maximise your farm. Before looking at the following map be aware that following this farming pattern is not always possible and you might often have to improvise in order to not get caught out. This is a map from 6.81 but the pattern still applies. 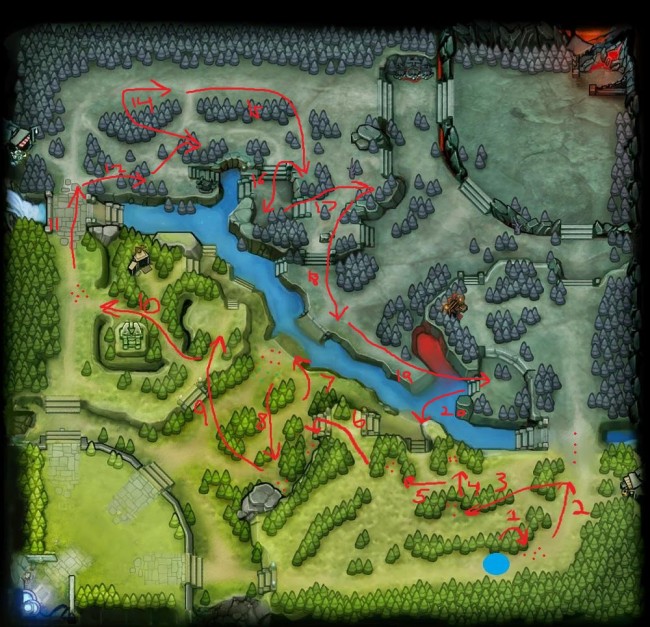 A quelling blade isn’t only used for better last hitting, it can also be used to cut trees to more easily get to creep camps while maintaining this farming pattern and split pushing. Always remember to push out creep waves when you can, but don’t get caught out of position!

This is a big deal when it comes to the late game, although it may not always be the best decision. You don’t win Dota with the amount of kills you have, the objective is to take the throne. I touched on this a little earlier so I won’t say too much more on the subject, but your item build can alter when you can or cannot take a team fight, ie. Boots of Travel, effectively increasing your ability to also split push.

Keep in mind that if you have strong team fight don’t be afraid to use it! If the enemy has a carry Naga Siren you are immediately on the clock. Figure out your game plan as a team and end the game before the Naga successfully comes on-line!

>Destroy the barracks, then get back. Simple and effective. Over-committing in an uphill rax push can easily result in a thrown game. If you know you can take a team fight and force a GG call then what’s the harm? But if things start to go bad, know when to back off. The objective is not to get hero kills, the real objective is to destroy the throne!

Map positioning is also critical when trying to end a game. Keeping creep equilibrium past the river and placing aggressive style wards will help to protect not only the carry but the entire team from ganks. During the late game it is extremely important to not get caught out. Playing the four protect one strategy means rotating as a team (except the carry who should be split pushing and following farming patterns) while also taking objectives and creating space. Following are aggressive ward placements for adequate protection and ganking potential. 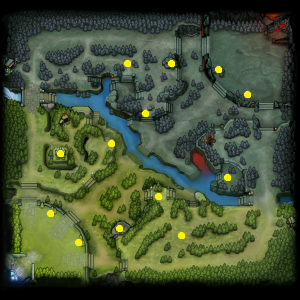 This isn’t always that important, but it does give you a decent aspect on how your farming game is going. Times will always vary depending on the variation in your item builds but for the purposes of this guide, the following list are AVERAGE times for what should be your first major carry items:

Hopefully this guide has given you some sort of insight into becoming a better carry player.