I see a lot of people asking for this so I’ll go ahead and post my build, UI, Keybinds, and whatever other info people may want to know.

First thing’s first: The build. Before you even think about building your class, Primeval or not, you should always have a solid build that you’re comfortable with. My build goes as follows: 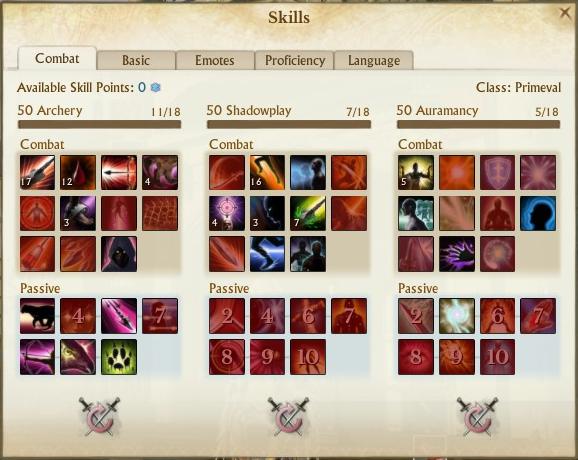 I don’t take Concussive Arrow like most Primevals. It’s a gimmick made for 1v1’s and nothing else. The cast time will get you killed in open world combat, or if an enemy in the gladiator arena has the means to get rid of a shackle. Every part of the build is made to kite, so taking skills like Concussive Arrow just isn’t worth the risk.

Charged Bolt – Fantastic skill. Generally this will be your first big hit, unless you go with a melee initiator to trip a mage and get some range. Hits hard, slows down your opponent, and combos with Endless Arrows.
Piercing Shot – This will generally be your follow-up on a Charged Bolt when more than 15m out. If your opponent is less than 15m away from you, hit them with Charged Bolt, a volley of Endless Arrows, and Piercing Shot to renew the slow effect.
Endless Arrows – Here’s your bread and butter for preventing stealth, tracking targets, preventing glider escapes, and building up attacks for Stalker’s Mark. It also does quite respectable damage, especially when geared properly. This skill’s DPS is greatly increased by Inspire, but I’ll get more into that later.
Double Recurve – Free damage boost. Why not?
Snare – I kid you not, this skill will save you from being wombo combo’d by melees more than you can say “pancakes” in a lifetime. When in snare, enemies can’t use skills like leaps (Charge – Battlerage; Overwhelm – Shadowplay) which either lead into trips or stuns. Preventing these will increase your survivability tenfold, because as a Primeval you’re a shark: Stop swimming (moving) and you’ll die.
Intensity – I would take this for the 15 second fear immunity alone, but the Bloodthirst is a nice bonus. It’ll increase your Piercing Shot damage for each stack of Bloodthirst accumulated. Endless Arrows also applies it.
Passives – Self-explanatory for most, but some Primevals may be wondering why I take Archery Expertise over Eagle Eyes, and the answer is simple: In a prolonged fight, shorter cooldowns mean more average DPS. That one second could amount to winning or losing a fight, even in the short term.

Overwhelm – Great at shutting down melee, followed up by a dropback or mobility skill to create a gap. Combos with Stalker’s Mark to deal more damage and trip. Be sure to use this before Stalker’s Mark when fighting opponents who have the Defense tree, as Redoubt grants trip immunity. This is what makes Blighters a pain. Stun them instead of trip, and you’ll have a better time.
Dropback – Fantastic gap creator, and negates falling damage. Need I say more?
Stalker’s Mark – Marks a target, and after 15 seconds will deal damage based on the number of attacks dealt (up to 20). The damage will reveal a stealthed target, so it’s a great opener, especially when used with Overwhelm against mages with no Trip protection.
Stealth – Invisibility, escape, initiator. I don’t think I need to elaborate on its usefulness.
Toxic Shot – Most Primevals don’t take this, and I can’t fathom why. Poison is a powerful DoT which deals more damage to bleeding targets (hello, Piercing Shot 100% bleed uptime), and will keep damage on an enemy, preventing them from entering stealth. The initial shot also does respectable damage.
Freerunner – Great initiator against other Primevals, Tricksters, and Stone Arrows to keep distance and prevent poison (hidden bow passive as well as Toxic Shot) from applying.
Shadowstep – If you ever need to confuse an enemy or gain the upper hand on a melee who’s trying to control the fight, shadowstep in and use Overwhelm. Your attack speed will be faster, making it nearly impossible for them to counter. Follow up with a dropback or Freerunner to gain distance. This combo, if successful, will reset your panic switch and allow breathing room in any fight, especially against burst melee and DPS mages.

Thwart – Grants a stack of Inspired and inflicts Distressed on nearby enemies. Never, ever use this with an enemy close enough to inflict Distressed unless you’ve just tripped or stunned them.
Teleportation – Your basic blink and gap-creator.
Health Lift – What? But it’s not on your bar! Yep. I know. What you’ll end up doing for maximum effectiveness before high-stakes fights is reset your Auramancy tree, slot Health Lift, use it on yourself, and reset it once more to the proper build. This at tier 3 will grant you an additional 1600 health. The reason I don’t keep it on my bar is because anyone can give it to you, but in case you’re going solo it’s something that will save you many, many times.
Shrug It Off – The most important tool in your arsenal. Stuns are a drag, and so is Impale. Basically, this is your anti-melee measure. Keep next to your twitchiest finger at all times.
Leech – Stealing buffs is fun. Putting an enemy to sleep? Even more fun. Use when you need time to recover, play half a song, or get that pesky melee out of the way while you deal with his ranged DPS or mage friend.
Passive: Hearten – In conjunction with Thwart, you’ll be able to stack up to 3 Inspired, which increases your attack speed by 3(8s), for an additional 24% attack speed at maximum effectiveness. With your dual wield boost, you’ll have 34% and on a dagger proc you’ll have a whopping 56% attack speed at your peak. Attack Speed not only decreases your Global Cooldown by the percentage you have stacked, but also increases the attack animations. For example, in 3 seconds without attack speed, I can fire 3 Endless Arrow volleys, however at 34% attack speed, I can fire an additional 5-arrow volley within those 3 seconds, increasing my DPS tremendously. 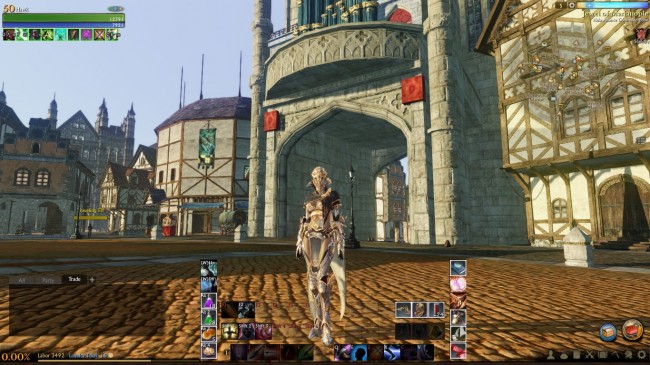 Shift 1–3 are my preparatory keybinds, or things that I either don’t use while deep in combat or use before combat entirely.

I have Shadowstep on f2 for easy reach from 3, and it’s right next to Overwhelm on f1 for a fluid follow-up combo after a Shadowstep.

Q and E are my twitch, or reactionary keys. Shrug It Off keeps me out of a stun lock, and I can follow it up immediately with Snare to give myself time to create a gap when enemies are on me.

Z is my basic arrow attack. I only use this if I’m out of mana. Extremely useful for prolonged fights against more than one opponent.

X is not quite as easy to reach as 1–5, but much easier than the Shift keybinds, and Freerunner is a pseudo-preparatory skill.

C and V are spammable, as often in stealth I need to immediately re-stealth after the effect begins to wear, or I’ll be in-stealth and need to get the first Leech off in order to assure a victory against a Darkrunner or equivalent enemy. Alternating in a one-on-on between Tab and C allows me to instantly target another stealthed enemy and Leech them.

Finally, I have Teleportation bound to Mouse Wheel (Up) as you shouldn’t be zooming in and out during combat, and makes for a very fast escape when a stun ends, same with Dropback on Mouse Wheel (Down), and really the binds for those two make sense in relation to the orientation and direction your character moves with the skills.

Potions and Food are alt+1–4, for relatively easy use mid-combat or after an escape without wasting time clicking them.

A Keybind that’s NOT listed is ` (the Tilde ~ key), which immediately turns my character 180 degrees for a front-flip dropback. More info here: https://www.youtube.com/watch?v=6hPDU9Rysb8

Hope my little guide helped out!