I thought I’d consolidate some of the information concerning dual-wielding, and add in some pictures to illustrate what I’m talking about. I’ll lead this off with the same disclaimer: this is data I collected over a couple hours and have not tested extensively. Furthermore, math is not my strong suit, so if anyone wants to re-crunch any numbers or log in and get some test data, by all means do so. This is by no means a guide, and if you believe something I’ve stated is flat out wrong or your own observations contradict mine, feel free to say so, so that we can conduct further tests.

1. 8% global cooldown reduction. Useful if you use a lot of instant cast skills, not useful if you use skills with cast bars or long “countdown” cooldowns. If you have a lot skills that are instant-casts with short cooldowns (Triple Slash, Rapid Strike), this could come in handy.

With one weapon equipped:

When auto-attacking while dual-wielding, both weapons attack simultaneously, however the off-hand weapon’s weapon speed doubles (resulting in half the DPS, along with the the 8% attack speed bonus).

Weapon speed seems to only affect auto-attack, as well as DPS calculation. From what I’ve tested, skills seem to all go at the same speed regardless of weapon type. The only way to speed them up is the global cooldown reduction from dual wielding (and for some skills, level them up).

3. Bonus stats from the secondary weapon, such as extra strength, stamina, etc. These are useful, but aren’t as important as the above bonuses. For example, in the above picture, you’ll see that I get the bonus 3 strength from my offhand weapon.

4. Some skills have a one handed and two handed version. Example: 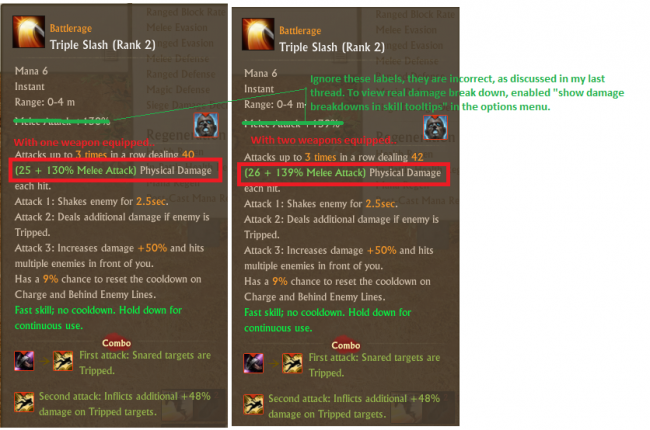 1. You don’t get the larger weapon DPS of two-handed weapons.
2. Most melee skills are based off your “Melee Attack” which is largely based off your main-hand. The only way your off-hand can affect this number is through bonus stats, and potentially the 8% weapon speed buff if it is indeed applied to your Melee attack despite not being shown. For this reason, having a high DPS main hand (a two hander) would result in higher skill damage.

If you’re a pure caster, you have two choices: a two-handed staff or a scepter and an offhand. Currently, magic skills are based off your “Magic Attack” and your intelligence. Magic attack is determined from your weapon’s “+ Magic Attack” stat and NOT your weapon DPS. Furthermore, most (if not all) magic attacks have a cast bar, rendering the cooldown reduction (which is usually much shorter than the cast bar) obsolete. Essentially, the only benefit you get from wielding a scepter and an offhand seems to be the offhand’s bonus stats. It’s for this reason that I feel that the only viable offhand for a caster is a shield, as the bonus stats from any other melee weapon are too insignificant to make up for the Magic Attack lost from not using a two-hander.

That’s all I’ve discovered so far. Again, if you find anything else or anything that disagrees with the above points, feel free to post it in this thread so we can figure out how all this stuff is really calculated.