This is a deck that I built last week and got me legend a few days ago. I peaked at around rank 300 NA before I started dicking around with other decks and fell to rank 640. 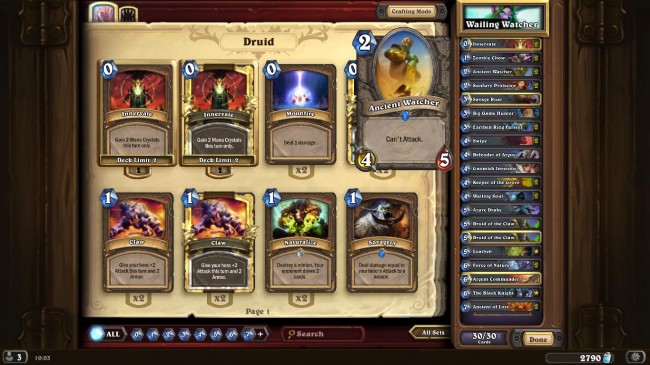 Innervate: One of the strongest cards in the game. Makes your mana cuve smoother, gives you access to insane combos like turn 1 coin watcher turn to innervate wailing soul.

Ancient Watcher: 4/5 for 2 mana is an insane stat line and will always get value when activated. This deck has 7 cards which can activate it so it will never be a useless card.

Sunfury Protector: 2/3 for two mana is by no means bad and also has the added bonus of activating watchers and giving your other minions taunt. Don’t be afraid of just playing this on turn two, early board presence is important.

Savage roar: Only one of these. I used to have a second instead of BGH but it wasn’t necessary and the second copy was a dead card too often to justify it.

Big Game Hunter: This is an optional card. I put it in to improve my late game and makes the handlock matchup less of an auto lose if an early giant comes down.

Earthen ring farseer: These used to be deathlord to synergise with wailing soul however with so many hunters and warriors floating around the deathlords died far too easily. The farseer also gave me some healing for the hunter match up and because the deck usually gets early board control the heal is often used for value on minions.

Swipe: Gives me some much needed board clear/removal/face damage.

Defender of agus: Activates watchers, gives taunts and is great at snowballing an early board advantage.

Gnomish Inventor: This decks needs some cycle to draw into the combos and this card works nicely to that end. Personal preference to whether this is replaced with another argus.

Keeper of the Grove: Great card. Acts as a targetable silence, removal and can activate watchers.

Wailing Soul: The glue that holds this deck together. The battlecry is almost always beneficial whether it is silencing a zombie chow or ancient watcher. Using innervate or coin to play this the turn after you play a watcher is incredibly powerful.

Azure drake: Similar to gnomish. Need the cycle and the spell power is great with swipe. Could be replaced with something like spectral knight if you really want to.

Druid of the Claw: Great card. a 4/6 taunt is already great and the added option of having the 4/4 charge for more face damage or emergency removal makes this card even better. Don’t be afraid to just charge into the face if you have a hand which can follow up to end the game.

Loatheb: This card is just so powerful. I could write for ages on how this card is one of the most powerful in the game at the moment. Instead I will just say. Play this smart, think about what ways the opponent has to win the game. If their only good play involves a spell play loatheb and get a huge advantage. Playing this on turn 8 to stall the opponents tempo so they cant recover for the turn 9 force savage combo is really good.

Force of nature: Enables the force savage 14 damage combo which is great by itself but this card is very versatile. Dont be afraid to use this to gain board control or just straight up face damage.

Argent commander: Good card which can keep the tempo up in the later turns, end the game and combos with savage roar.

The black knight: This card gains lots of tempo and value for you. Almost every deck plays taunts and removing a taunt so you can go face and end the game is invaluable.

Ancient of Lore: One of the best cards in the game. 5/5 plus two cards? Yes please. Also don’t undervalue the emergency heal with so many hunters in the meta at the moment.

Druid has always been one of my favourite classes and through the seasons the watcher variant has always been my favourite. However to my dismay over the last few months it has been declining in power and popularity. With Naxx being released I set to work trying to breathe new life into my favourite deck. First I tried to make a variant with egg combos but that ended up not being good enough so I had to look at other new options Naxx has given us. Wailing Soul was a card that when all the new cards were leaked I pretty much overlooked thinking it was just a worse yeti and that the battle-cry was mostly a bad thing not worth the reduced attack compared to chillwind. I was wrong. When a deck it built so that the self silence will never be a huge downside and most of the time it will get huge value by silencing a watcher, zombie chow or death lord wailing soul can be very powerful.

For those not familiar with the watcher druid play style it is quite aggressive. This deck is what people call mid-range. It can be very aggressive by killing opponents by turn 7 or hang in a long control game by getting value out of its cards and card draw.

The aim in the early game is to get board control. Mulligan aggressively to try and get a play on every turn including turn one with with either zombie chow or innervate/coin. Don’t be afraid to just play watchers, you have 7 cards that activate them so they will basically never be useless.

In the mid-game the goal is to snowball any early game advantage you have gained and finish your opponent. Dont be afraid to go face, especially if you have direct damage in hand like the force savage 14 damage combo or even less than that. Exercise good judgement when deciding to trade. It is very important to try and get as much value out of your creatures and if you make a trade that your opponent would have made anyway you have just lost damage to the enemies face which is quite bad in this sort of deck.

While this deck is focused on midgame power it by no means an auto loss if the game goes past turn 10. This deck can play the long control game very well. I have won many long games vs priest and warrior. If you don’t think you can kill your opponent in the midgame play the value game. You are still a druid which runs 2 ancients of lore, azure drake, gnomish, BGH and the black knight. All these cards have supreme value in the late game.

If you have any questions about match ups or other things just ask in the comments.