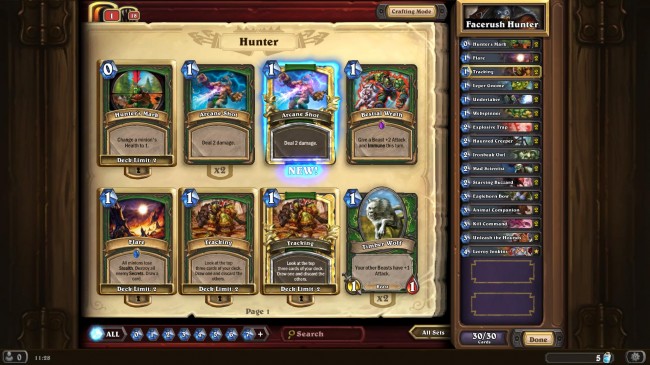 If you’re up against Hunter keep Flare.

If you’re up against Druid or Handlock keep Hunter’s Mark.

If you’re up against Zoolock keep Explosive Trap.

Throw away everything else.

Always hit face, unless a trade makes it almost impossible for him to kill a bigger minion of yours. If you’re up against warrior deal with the armorsmiths first.

Example You played Leeroy against a Warlock. Your board is now Leeroy + 1 small minion + Eaglehorn bow. His board is now 2 Welps.

You need to kill at least 1 Welp, so that he can’t trade Leeroy for free. He would have to buff his Welp to trade Leeroy.

Depending on what was played earlier you might want to kill both Welps to be secure against buffing his remaining welp. It’s 3 less damage to him (weapon hits welp), but secures 6 damage from Leeroy in the coming turn.

Rush him down to 10-15 life within 5-6 turns, before he can drop big taunters. Then finish him with your win conditions. If a taunt is up, silence it or Hunter’s mark, kill it. Alternativley just Kill Command, Kill Command, Hero Power to face.

You do not care about card advantage or trading efficiently.

Number of explosive traps left in your deck, to know if Mad Scientist will draw it and to know when to play Eaglehorn Bow (see below). This includes what you threw away with tracking.

Things you shouldn’t need to remember

If you’ve used your Owl, Kill Command or Leeroy – If you’ve used it and haven’t won already, you should have thought about it long enough to remember.

That is 1 damage done on turn 2, with 4 more damage on board with deathrattles. On turn 3 you’ve have 12 damage on the board already.

Not in meta: Shaman, Rogue, Mage

Tracking: Use when you have 1 mana free, that you can’t use any other way or when you need an answer right now or next turn (or you lose)

Examples: You’re in a mirror match and need a flare (or you lose your board). You’re against a Zoolock and need an Explosive trap. You’re up against a sludge belcher and need a Hunter’s mark or Ironbeak Owl. Your draw was weaker and you need carddraw, so you track for Buzzard+UTH combo.

Eaglehorn Bow: Play it, hit face to it, then think about if you’ve used up all explosive traps already. It is very unlikely for the bow to be destroyed, so you can wait 3-4 turns to see if you can get another charge on it through your explosive trap.

Exception: It’s turn 5, you started the game and the opponent is at 15 life. You’ve got 1 charge left on the bow and your explosive trap is played. You have 2 Kill commands in hand.

The right play is to use the bow against face, even though you won’t get the extra charge on it. Your opponent might play Sludge Belcher on his Turn. With the extra 3 damage to face he’s in range of your Kill Commands + Hero Powers and will die by Turn 7, without you needing to attack him again.