“Strygwyr the Bloodseeker is a melee agility hero imbued with dreadful powers to fuel violence and rip enemies apart in the heat of close combat.”

This guide is recommended for Low(1000 MMR), Medium (3000-2000 MMR)and High (4000 MMR) Skill Level and it’ll work in most of the unranked pubs, this guide requires basic knowledge of the game and that you have played the heroes a few times (1-5 times)

Drives a unit into a bloodthirsty rage, during which it has higher attack damage, but cannot cast spells and takes damage every second. Bloodrage dispels the target before applying its buff.
Range: 800
Duration: 6/7/8/9
Increased damage: 30%/60%/90%/120%
Damage Per Second: 20

This ability is probably the one you want to max the last, you might also just leave it on 1 point but it’s very situational, use the silence before ulting someone so they won’t do anything drastical as you come up to them, it’s better to just max it last in level 14 just because of how much damage output this can deal with your base damage and how fast you can push down lanes with it.

Remember to use this on the enemy that has linkens before ulting them, so at least they will stay inmobile.
This can’t be dispelled by any purging abilities/items like BKB, Diffusal Blade or Slark’s Dark Pact.

Always pick this first when going lane, it doesn’t matter if it’s a side-lane or mid. This is Bloodseeker’s sustainability skill, if you are very good at last hitting you won’t get harassed out of lane, ever. Blade Mail maximizes this ability’s utility.

Enables Bloodseeker to sense enemy Heroes with health below a certain percentage wherever they are, giving him vision of that unit, increased movement speed and increased damage. Bonuses stack per Hero. Bloodseeker gains True Sight of enemy Heroes below half their visiblity threshold.
Radius: Global
Duration: Until no nearby valid target exists
Bonus movement speed: 5%/15%/25%/35%
Bonus damage: 5/15/25/35
Thirst HP percentage detection: 50% of target HP (True sight is 25%)

This skill is what makes Bloodseeker so good at chasing, getting a basher can be considered to stop getting kited. Always max this with BloodBath, you decide by yourself which to max first, I usually max BloodBath first if I get harassed alot in the lane.

Causes an enemy unit’s skin to rupture, dealing massive damage. If the unit moves while under the effect of Rupture, it takes a percentage of the distance traveled as damage. The damage is dealt through magic immunity.
Range: 1000
Duration: 7/8/9
Initial damage: 150/250/350
Distance moved damage: 20%/40%/60%

This ability is what makes Bloodseeker so annoying along with his perma-silence. As I said before, Silence the enemy before ulting so they won’t do something drastical as you come to them. Everytime this ability is off-cooldown try to look if there is any nearby enemies that can be taken as kills, you usually go mid with this hero so you can have ult as fast as possible and gank with it, starting your snowball.

If you’re playing against a Bloodseeker and you get ganked by him in a 1v1 situation try to carry a TP scroll, just when he ults you try to TP base and you’ll be okay, that’s how you don’t feed him.

Stout Shield: Get this to diminish the right click damage you’re getting in the lane.

Tango: Just one of these is good, you can even go with 1 or 2 pulled tangoes, just in case you’re getting harassed too much to last-hit.

Quelling Blade: Easier to last hit? Why not!

Power Treads: Better than Phase Boots, you already have enough move speed when chasing, also going for phase boots with my item build would let you with a abysmal attack speed for a long time, you also benefit alot from the HP bonus and the agi stats if you do tread-switching, if you’re not good at it just leave them at Strenght.

Blade Mail: This is the star of the thread, this item synergies really well with BloodBath as you can tank-up bunchs of damages if you managed to get kills in the meanwhile, which you’re really likely to. If you’re also level 14 with maxed bloodrage you have to tank enemy’s heavy right click damage you can make that damage received into some more dmg for yourself making it a greatly synergyzed item with his ult and bloodrage, this will make the enemy tank your damage and their own damage, when he dies you’re back at full HP again like nothing happened.

BKB: If the enemy is got tons of stun or magic burst damage you might be better off just getting this item rushed just after the Blade Mail, it’ll help alot in fights, if this is not the case you’re better off getting this later on the game (when you have mjollnir for example), approaching the 10s BKB to the max.

Skull Basher: Getting this item right after Blade Mail will prevempt the enemy from TPing away when you ult them, unless you have the worst luck with RNG you can make a straight Abyssal Blade. If your enemy isn’t smart enough to TP when you ult you’re just better off getting something better like a BKB or Maelstrom and build Abyssal Blade later.

Maelstrom: Get this if you’re not getting Basher, it can help for flash-farming and when you’re on a fight the lightning can jump on creeps healing you, this item is built mostly for the Mjollnir upgrade for the Late game. This item can be certainly better than Radiance, depending for what you’re using it.

Mjollnir: This item does a similar job to Blade Mail’s with Static Shield, dealing tons of damage if you have this plus blade mail activated aswell as increasing your attack speed by a blast, now it’s the time a basher/abyssal blade can synergy greatly with all this attack speed!

Abyssal Blade: 2 second stun that can prevent Base TPs from your enemies and increasing your DPS by alot and almost nulify kiting.

Choose ONE if you have BKB, get both if NOT:

Heart of Tarrasque: Tank alot more! Make that Blade Mail and Static Shield do god’s work!
Butterfly: Insane DPS and EHP! Make your right-click damage do god’s work! Preferably to not get if enemy Carry has MKB

Radiance: Consider if you can get it sub-20 minutes, to increase your farming capabilities, also if you’re in a fight you’re likely to kill a creep with the Radiance Active which will heal you, it can do Maelstrom’s job.

MKB: Get this if the enemy has a Carry with Evasion or a blind skill. (Phantom Assassin, Butterfly, Heaven’s Halberd, Tinker Laser, etc).

Sange & Yasha: The famous Core item for Bloodseeker, it can be a good pick for Bloodseeker but you should build this if you’re behind, because it’s easier to build than most items and gives a bit of everything, in the other hand if you’re ahead, this can only lead to throw the game as this item won’t make much of a difference in your snowball. 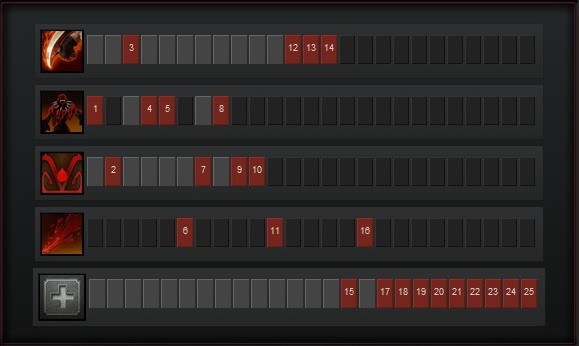 You want to have 3 points in BloodBath by the time you hit level 6, which will almost completly nullify the harass you will receive in lane.. most of the times, after that it’s up to you if you want to max out the bloodbath or just keep maxing the Thirst.

You want these 2 skills maxed by level 11 because they will do both things of these things:

You want to max BloodRage the last because you only need one point in it early for the sole Silence, maxing it early for the damage isn’t worth much as your base damage is pretty.. low, and will help tons the enemy damage output if you don’t have blade mail yet.

This hero can be run in any lane without major troubles as he has good farming capabilities (good base damage and damage gain) and good survivality as long as you get creeps, you might want to run him in offlane and mid most of the times because of the bonus XP making you get your Rupture faster, when ran in the offlane as long as you stay under tower you’ll be okay in HP and take safe last-hits, you can run him in Safe Lane if there is no other hard carry that can lane it properly, (for example 3 supports and a Queen of Pain in your team) but this is mostly situational.

DONT RUN THIS HERO IN THE JUNGLE! It’s absolutly awful, you get low levels and farm due to your low damage output and you’ll struggle alot in the early levels, even with choke points.

When there are enemy heroes that depend highly from movement and spells, good examples:

Any fully spell dependant, slippery or squisy hero: Skywrath Mage, Weaver, Faceless Void, Sniper, Riki, STORM SPIRIT, Tinker, Outwork Devourer, Invoker.. I can go on and on but this would take a decade.

I made this guide to make a name for this infamous build and let you ♥♥♥♥ some pub-♥♥♥♥♥s with it. This is my first guide so all feedback and tips will be taken in account for the next guide.

My englando isn’t perfect, I’m not a native speaker so any grammar mistakes will be taken, sorry for this.