I’ve been working on this the past few days and I finally feel like it’s at a point where I’m happy enough with it to release it.

So what is this?

This deck tracker automatically tracks, you guessed it, your deck! And it looks like this in game. 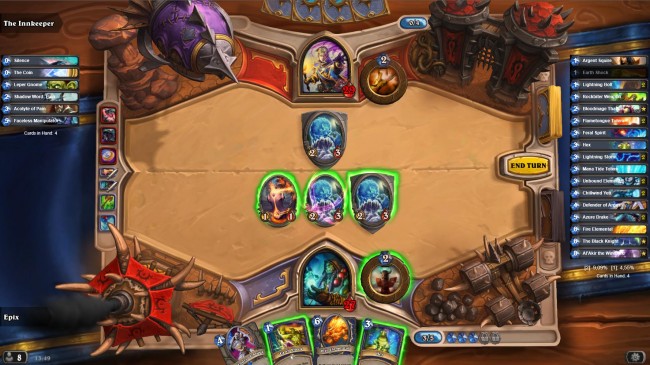 The program is not reading or writing any Hearthstone memory. All the information comes from log files created by Hearthstone (most of you probably know about this by now).
The overlay is simply a window without “collision” (so you click through it) sitting on top of Hearthstone.

This does not: Record you wins/losses or anything else for that matter. There are enough tools for that I think.

Some more detail, it:

All of these (except for tracking you own deck) can be disabled individually. 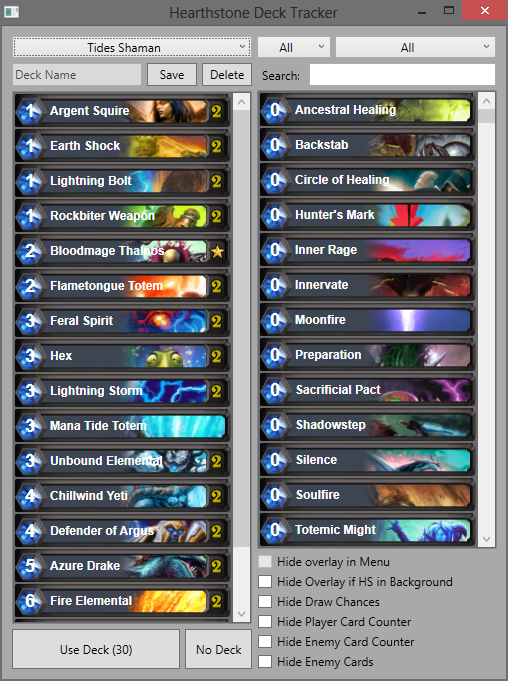 Left side: deck, Right side: all the cards which can be filtered by Mana, Class and Name.

Doubleclicking a card adds/removes it to/from the deck. (Protip: a faster way of adding cards to your deck (in my opinion) is typing the name to the point where there is only 1 card left and pressing enter (twice for 2), ctrl-A and repeat)

Once you are done with the deck you can give it a name, save it and press the “Use Deck” button.

The “No Deck” button will clear your current deck (only in the overlay, and track your draws rather than you cards left in the deck).
This may be good for arena, as you can add cards more than twice but it won’t display a count over 2 (because I am lazy and I don’t think this is as necessary).

Other than that:
You need .Net Framework 4.5 installed to run this (I think most people have this anyway. If you don’t: google it, not hard to find). I’ve tested/had it tested on Win7 and Win8, pretty sure it does not run on WinXP because of 4.5.

Both of these should only be a problem at most once. In case it happens more than once try starting the Tracker as Admin (if there is for some reason permission issues with the log) and if that still doesn’t work feel free to message me.
If this problem persists, the path to your hearthstone folder may be wrong. Edit the config.xml and clear the value in <HearthstoneDirectory></HearthstoneDirectory> (so that it looks like that). The tracker will on the next start ask you to select your Hearthstone folder.

Card Database from http://hearthstonejson.com
Credit for finding the log (and you probably all know him by now) goes to Flipperbw

I hope this works and hope you like it.

Version 0.1.1 Download here (no fixes for the decklist being not displayed correctly yet, but it includes a notification feature in case of new updates being available)