This thread attempts to determine the most effective routes to typical “final” pet levels (70/70 maxed Rare, 90/90/90 maxed Legendary, 100/100/100 maxed Divine). This is done through a mathematical analysis of the pet feeding system.

RotMG pet abilities can be improved by feeding items to the pet; the feed power (FP) of the items are then applied towards the pet’s abilities, improving them through “level-ups”. Once suitabily improved, two pets of the same tier can be fused together to create a pet of the next-higher tier (Common to Uncommon to Rare to Legendary to Divine).

However, the potential “max level” of these new pets directly depends on how much the original pets had been improved. To ensure that a post-fuse pet can be improved to its theoretical max level, it is critical that the pre-fuse pets first abilities have been completely improved. While it is not mandatory to improve the pre-fuse pets second/third abilities to their max level as well, it is often considered desirable to do so since the per-feed costs (in fame or gold) roughly triple from one tier to the next.

The analysis and results discussed here are only valid if the following holds true: 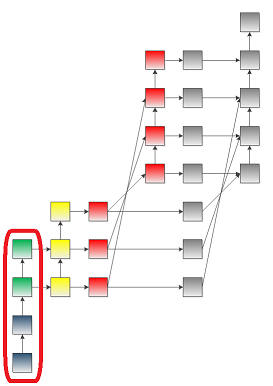 The route to a maxed Common or Uncommon pet is very straightforward. However, it’s the first step along some paths that are considerably more interesting, so let’s go ahead and get these cases out of the way.

Once you have two maxed Common pets, they can be fused to create a 30/1/0 Uncommon pet. From that point, an additional 8527fp is enough to max the pet’s first stat; this raises the second stat to lvl41, for a 50/41/0 Uncommon pet. Finally, once you reach this point, an additional 7791fp is required to max the pet’s second stat:

On a mathematical note, one intermediate goal in this work was the development of a weighted directed acyclic graph depicting every possible route to a maxed pet of any tier. Note that there’s only one path to a maxed Uncommon pet (not very interesting so far), and the weights on these edges don’t account for the fact that a second Common pet has to be maxed for fusion. So, let’s go ahead and track total FP investment for the points on this graph; this will allow us to make reasonable FP-fame decisions when we have multiple options:

If your goal is a maxed Uncommon Pet, you really have no options: max two Common pets, fuse them, and keep on feeding it until it’s done. 50/41/0, meanwhile, is where the first ability is first maxed; this will be important when dealing with “feed or fuse?” decisions in later tiers. 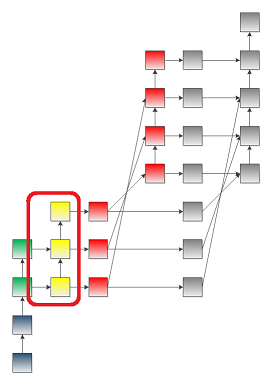 Assuming that those are the only two fusing points of interest, this presents two different routes to 70/70: 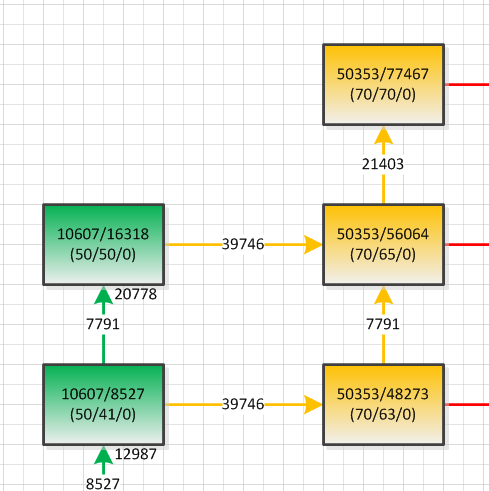 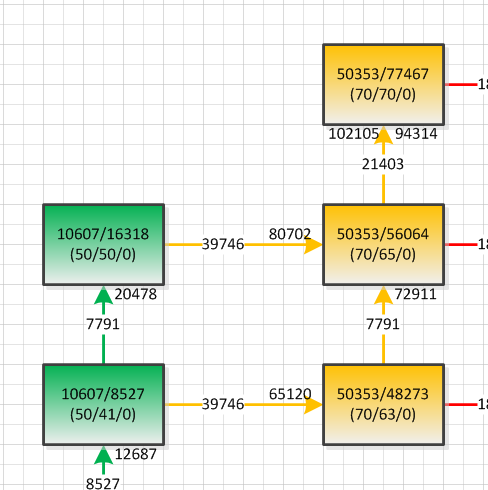 As a result, this decision is a compromise. There is no right answer, and the best route varies from person to person. However, to better address this decision in more depth, let’s make some additional assumptions.

Assume that the player has no fame to spend, and has no items to feed. As a result, they can only feed the items they farm, and they can only spend the fame that their characters earn (and die with, of course).

For Path #1 (maxing first), every 30 fame earned allows them to feed the best item they’ve earned in that time. Let’s say that all these items have an average fp value of X fp/feed. Since you’ll have to do this twice (for two Uncommon pets), we can calculate the amount of fame required:

For Path #2, every 100 fame earned allows them to feed the best item they’ve earned in that time. Let’s say that all these items have an average fp value of Y fp/feed. Thus, the total amount of fame required for this edge would be:

What exactly does this mean? This can be interpreted as follows:

(Looking at the “para rings vs. exa rings” examples above, X=150 while Y=300. In this case, the (Y<1.666…X) test does not hold true, so one should conclude that fusing first will cost less fame. The above examples show this to be true: feeding the para rings to Uncommon pets would cost 3,120 fame while feeding the exa rings to a Rare pet would cost 2,600 fame.)

I spent some time in #rotmg asking players about the best feed item they felt they could reliably farm in 15 basefame, and the results were generally along the lines of para rings and other 150-200fp items. In comparison, when asked what they felt they could reliably farm in 50 basefame, the answers were more along the lines of minor UTs and 400+fp items. This anecdotal data would seem to imply that diehard item farmers using a “zero-sum game” to feed pets would have the best success on Path #2.

Of course, very few people use this “zero-sum” model to feed their pets. Lots of players stockpiled inventories of 500+fp items to apply towards their Rare pets. Players similarly had tens of thousands of fame saved up when pets were first introduced. 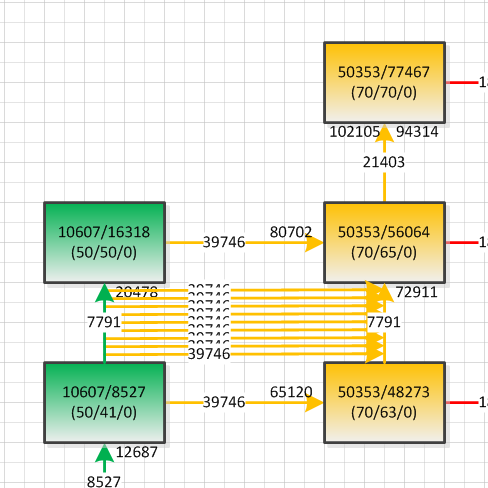 As the previous sections discussed, fusing later will require more items at a lower average fame-per-feed cost, while fusing earlier will require fewer items but at a higher average fame-per-feed cost. For players with existing stockpiles of feed items and fame, calculating the ideal point for fusing two 50/* Uncommon pets to take the optimal route to a 70/65 Rare pet is not discussed here, but will be addressed in a future work.

If your goal is a maxed Rare pet, then there are two primary options (with a continuum of potential choices between them). In general terms, players who want to minimize fame costs should max their Uncommon pets and fuse at 50/50, while players who want to minimize item farming and number of feedings should fuse their Uncommon pets as soon as possible (50/41) and feed the single Rare pet from that point. Readers can choose which path would be best by evaluating their efficiency at farming high-FP feed items, with respect to basefame earned in that time. 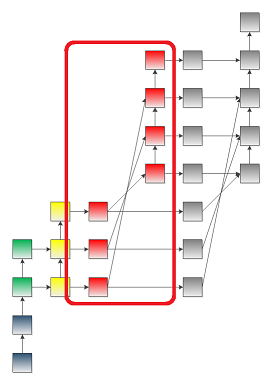 As we saw from the previous post, there are three types of semi-maxed Rare pets that are interesting from a fusing standpoint: the 70/63 pet created by fusing as quickly as possible, the 70/70 fully maxed pet, and an intermediate point (70/65). Let’s evaluate all of these in parallel.

To begin with, they all require just over 185k FP to max their first ability. This will raise them all up to 90/*/71, where the second ability depends on the Legendary pet’s starting point. 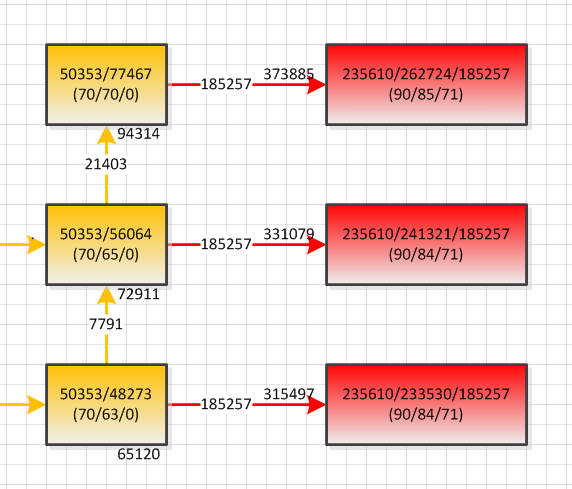 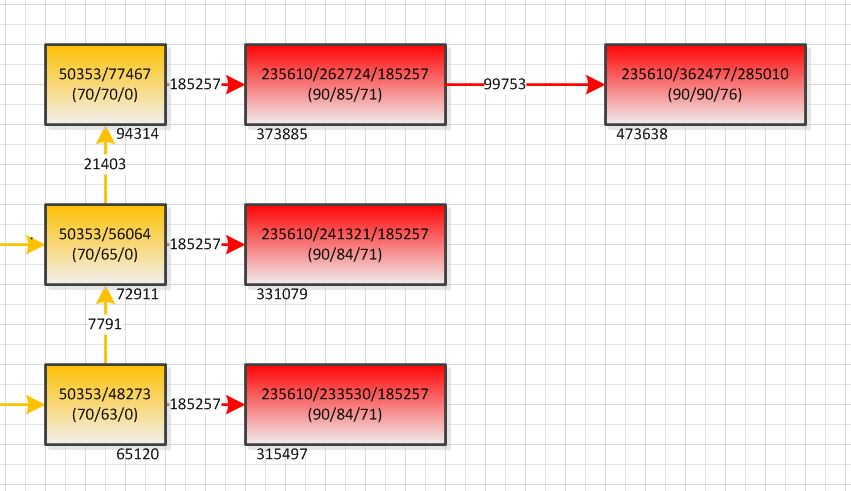 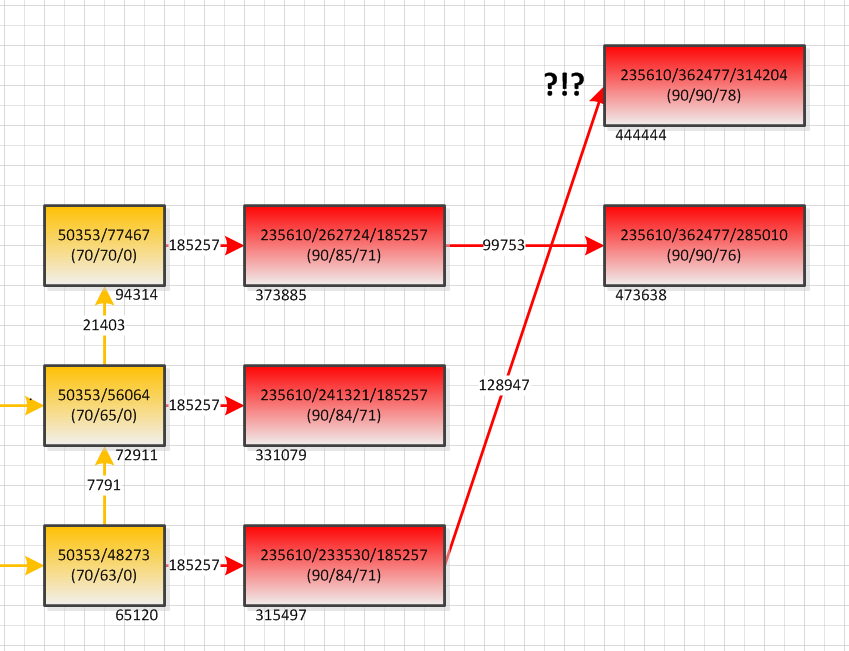 (Meanwhile, the 70/65 starting point ends up midway between the two, and is otherwise unremarkable.)

If you look at the FP requirements for these two paths, it is surprising to find that they both require the exact same amount of FP: 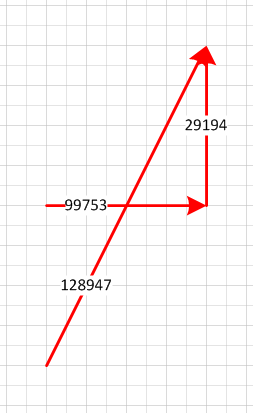 It doesn’t matter where you start…by the time the paths all converge, you’re still investing the same amount of FP to get there. Here’s the full map for the Legendary tier if you’d like to verify it for yourself (only the lowest “total FP investment” values are shown here): 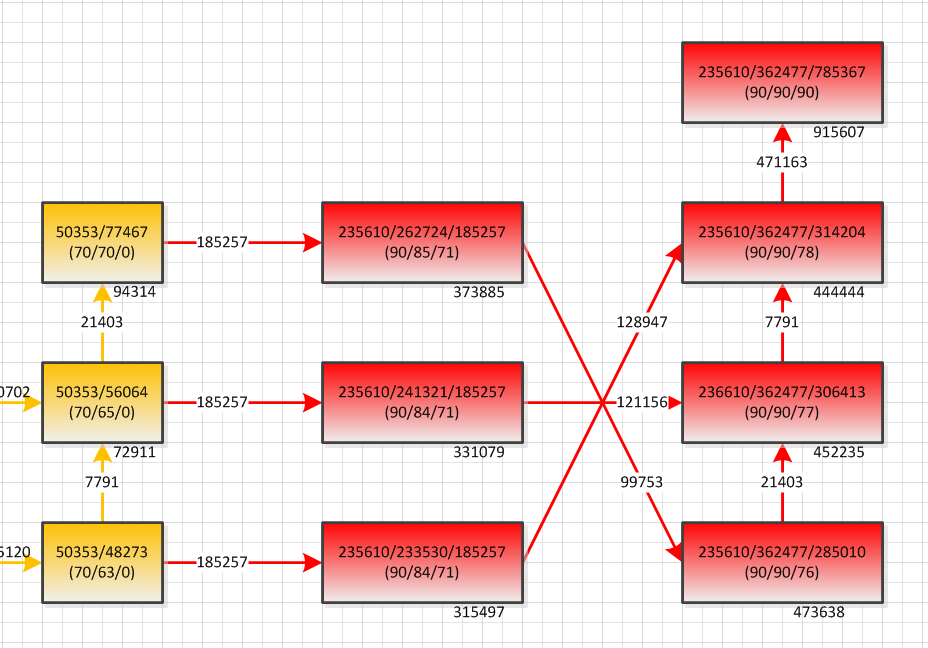 As with the 70/* Rare pets in the previous post, there are in fact a continuum of potential fusing points into the Legendary tier (70/64, 70/65, 70/66…). However, unlike the previous compromise, the newly-fused Legendary pets here all still need:

As a result, the resulting “feed vs. fuse?” decision for semi-maxed Rare pets is not particularly interesting.

If your goal is a maxed Legendary Pet, then you should fuse your Uncommon and Rare pets as soon as you possibly can (50/41 and 70/63). This will get you to the Legendary tier as soon as possible, where the feed items will be applied towards the third ability. Any FP you spend towards maxing your Uncommon or Rare pets’ second abilities is wasted.

If your goal is a 90/90/* Legendary Pet, then…this is actually is a bit of a compromise. If you really don’t care about the final level of the third ability, then fully maxing your Rare pets to 70/70 will minimize the amount of Legendary-tier feeding that is required. This leads to a compromise similar to what we saw in the Rare tier: maxing first means the player must feed 29,194fp twice at 100 fame/feed while fusing early means the player must feed 29,194fp once at 350 fame/feed. This particular compromise has also been set aside as an area for future work.

If your goal is a 90/*/* Legendary Pet, then you should fuse you Uncommon and Rare pets as soon as you possibly can (50/41 and 70/63). Regardless of starting point, it will always take 185k FP to improve the pet’s first ability to 90. Maxing your Rare pets first doesn’t save you anything here, either. Granted, your pet’s second ability will be better if you max your Rare pets first, but only by one level (lvl85 instead of lvl84) and your third ability will still be the same (lvl71).