After successfully killing off my stable of backup characters, I recently hit the pavement and went back to rolling some replacements. I wanted to economize my time spent, but didn’t want to settle for bad rolls. I reached for an old tool I drafted almost a year ago to assist me in the process, and realized that it is still my preferred method for determining whether or not I have a “good” or “bad” roll on my hands.

I am of course speaking about HP rolls only. As this is the most expensive stat to max, I think it’s worth taking at least a bit of time to get a decent HP stat to reduce the need to drink life later on. The amount of resources you may have on hand will certainly dictate how much time you want to devote to rolling. Some players don’t want to waste time rolling at all and will take whatever RNG spits out and go ahead and max that character regardless of the cost. Others may look at the sum of all stats, or focus on the stats most important to them. It seems that most players who examine their rolls compare them against the average rolls per class to determine a +/- value. RealmEye is certainly handy for this value determination whether you are checking your character roster, or using the /t MrEyeball stats method.

This is all a matter of preference and personal opinion. Time is valuable, so if you prefer to go for good rolls you can put in a bit of time up front and have to drink less later on, saving time on the back end. However, time spent rolling could also be time spent obtaining life in tombs, or in other dungeons getting the pots you need. So where do you draw a line of balance? Well, that’s a tough question to answer, so I prefer to go ahead and shoot for a good roll but using a more efficient method.

I always want to know whether or not I am on pace to a good HP roll without having to wait until level 20 to check the result. Sure, I can use the RealmEye stat check method and go for a +/- value, but I’d prefer to do the checking on the fly with some solid numbers. I am speaking about a reference that can that can sit right next to your monitor that can be directly compared to the HP stat you see on screen upon achieving each level.

The following rolling guide is based simply on multiples of 27. If you were to average 27’s all the way to level 20, you would be 57 HP deficient from max cap, regardless of character class. This would mean you would need to drink 12 life to max, which is a very economic/reasonable amount. I find that it is difficult, but often possible, to roll this kind of number. Going for more than an average of 27 per level is far too uncommon and seems almost impossible while in the process, so it’s not worth setting a goal that high as that would take way too much time.

Looking at the numbers below, I find that when I stay within 15-20 HP of each value listed per level, I know that the roll is worth keeping and continuing to march forward to level 20. If I am more than 15-20 HP off pace at any given time, I get rid of the roll and start over immediately. This enables me to spend as little time as possible rolling, but still ensures an economic and reasonable outcome that won’t cost me too much life later on, should I want to max.

So, I share this tool with you as just another way of doing things. I am in no way implying that my way is better than the way you choose to roll (or not roll at all). Just as I’ve learned many things from all of you, I am simply hoping to put another tool in your toolbox of references.

Based on an average of 27 HP gained per level: 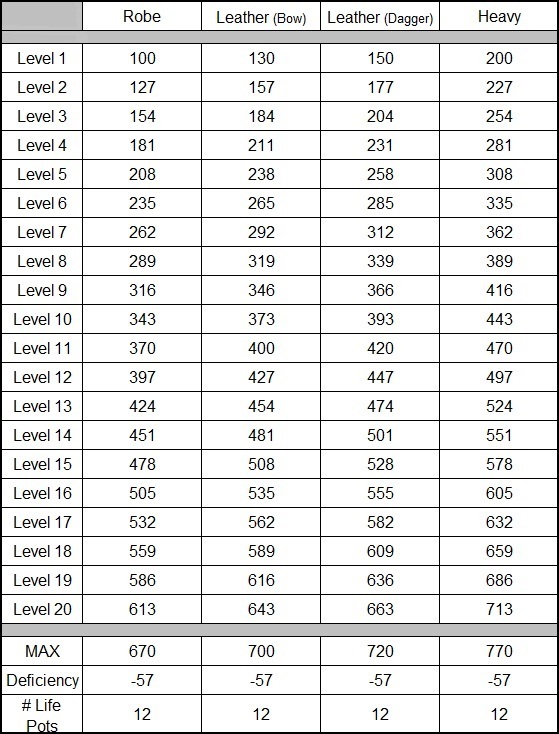 Based on an average of 26 HP gained per level. In this instance the numbers are less stringent, however the resulting rolls would require 16 life to max: 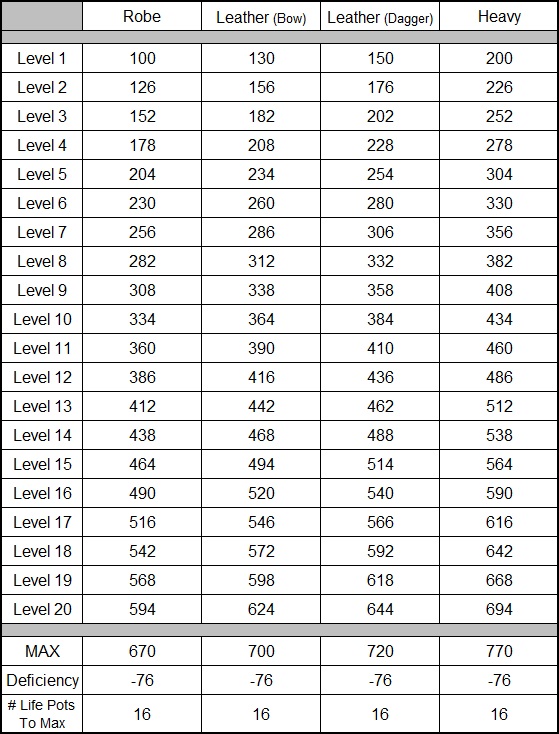 Based on an average of 25 HP gained per level. If you don’t mind drinking 19 life to max, these are fairly common rolls. According to my own taste, I consider this to be bad/mediocre roll territory: 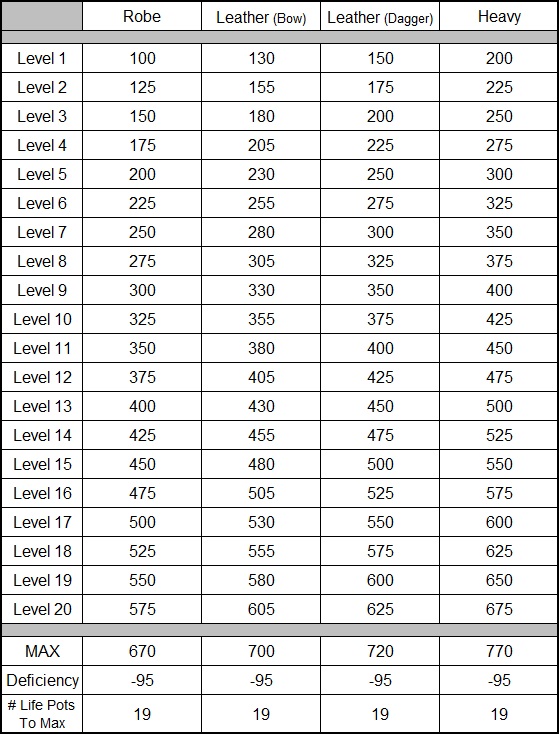 If you are interesting in using any of the charts, I would recommend grabbing the images from the links below the charts, or copying the image to a word file, and printing out a hard copy. The idea is to simply keep it close by for reference while you are actively rolling.