League of Angels Seraphs and Inferno Guide by adithvarghese

Your angel starts of from “COMMON” and uses 1 seraph stone each try to have a chance at becoming “UNCOMMON” and from there takes 2 seraphs each try for “RARE” , 3 seraphs each try;for “EPIC” , 4 seraphs each try for “LEGENDARY” and so on to a total of 10 Evolution.; ;;;;Until you touch level 51 , this much be your one and only course of action…. Dont be worried if you are using it on even nocturna or prospera while other use it on boadecia,, while “inheriting” the evolution level ALSO gets transfered thereby YOU ARE NOT WASTING YOUR SERAPH STONES {NOTE: Only Evolution”Level” gets transfered and not “Evolution Points” } 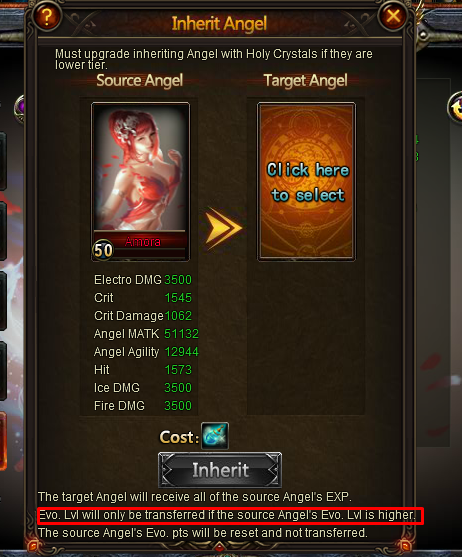 Once you reach level 51, you unlock GUARDIAN ANGELS ;feature and from there on , Stop evolving ur deployed angel once she touches Legendary and

try to make all your guardia angels to atleast RARE and once thats done you can go back to your deployed angel and start working your way up into making her MYTHIC ( Consumes too much so u better be preppared to lose your patience);

Inferno is basically a modified version of erebus wherein 2 or 3 people can team up and participate ….

so basically lvl 45 Inferno is the Beginner’s version and you unlock a stronger version once every 5 levels;

There are a few buffs other than the beasts, the Artefacts and treasure :

Ok so there are a few does and donts which can help you to get a proper grade { S, A, B} in inferno

1. ALWAYS opt for a 3 player team if you want rewards …………….. If you are gonna do inferno to collect all the soulstones 2 players is more than enough;

2. BEFORE you click ” Start” talk with your teammates and plan on how each player is gonna tackle the course, i,e 1 player takes bottom, 1player takes middle and last player ( preferably the one who is gonna fight the boss ) takes the top

3. DO NOT activate teleport { Star Shaped Tile } Its an unnecessary gamble that will throw your plan to shreds

4. Move upto and i mean only UPTO maximum 14 second in ur timer … this way u can be assured of not gettin thrown into a cooldown .. ; ; if u r goin to collect an artefact , move to maximum 14 second whereas if its for fighting a beast you can start to a maximum of 10 ;secs . 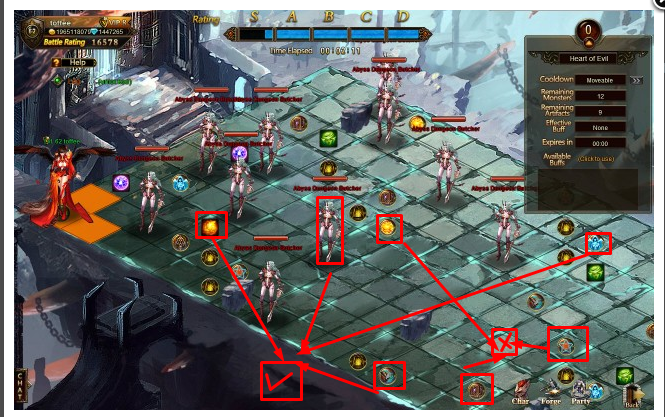 { This is a picture from the forum announcements , so pls dont ask me about the players involved in it } The Tick Mark shows what you can target and the X mark shows the ones you neednt activate as they r just useless … Ive left the treasure one out because that depends on you ;)