So people have been asking how to build Dio for PvE. Well, I’ve made a guide to adding points in all the essential skills you’ll need to have a Devil Force Dio that can use onrush. For those who do not know, onrush’s duration can be extended by holding the direction key of the direction you’re facing and lasts for as long as you have AP, allowing you to an incredible amount of damage in one go. 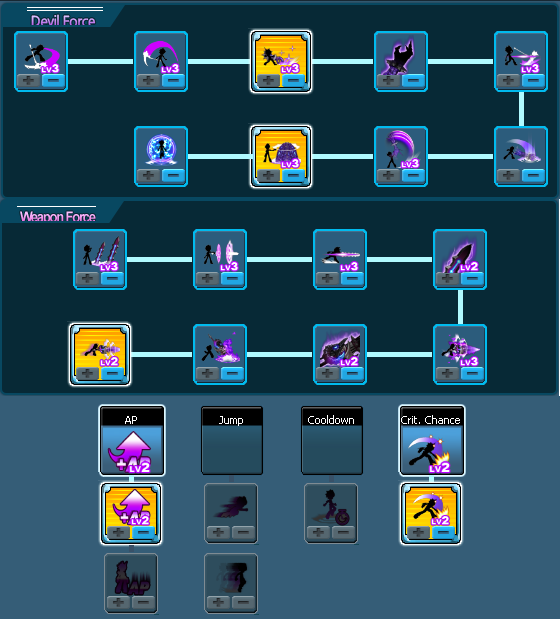 All active skills are maxed in this tree, they’re prerequisites for your future skills. You’ll put points in AP regen and critical chance passives. 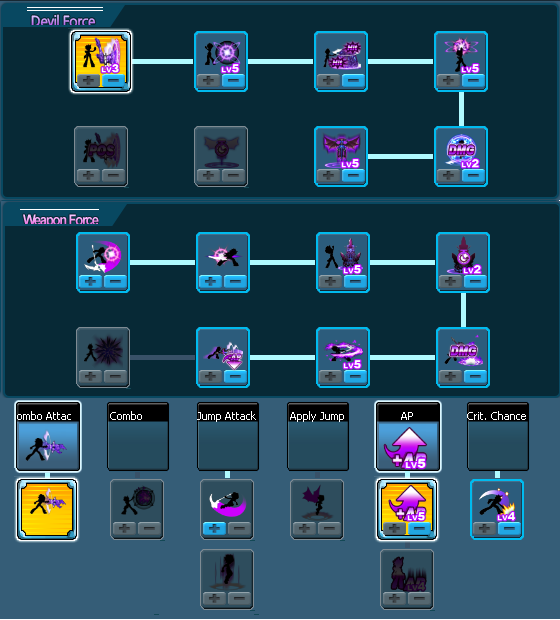 Only requires prerequisites in active skills. Charging death star 1 and 2 on Weapon force only need to be level 1. Rebound enhancement and Death Zone enhancement are not required. Chaotic Spark is not added. Once again, AP regen and critical chance in passives, and additionally, combo attack passive. 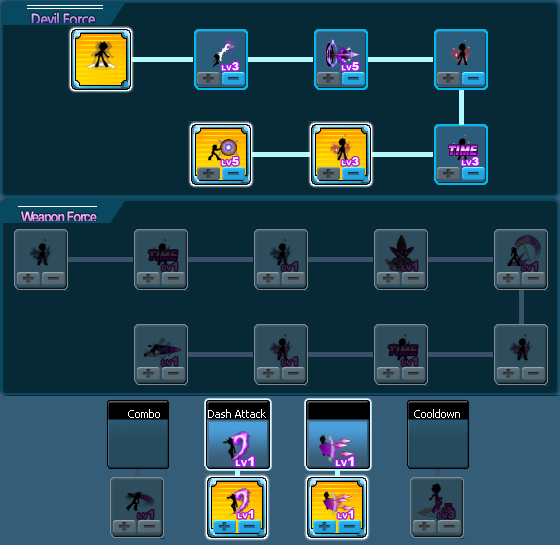 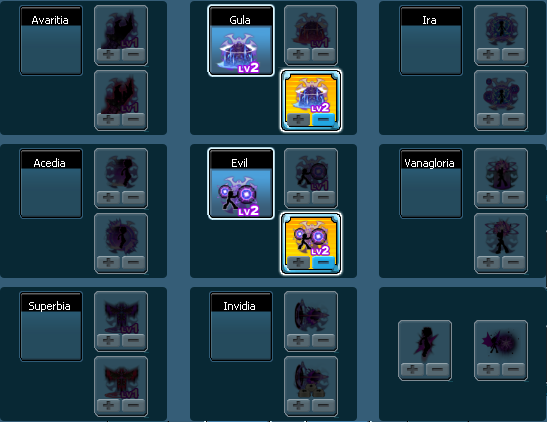 As you can see, only Necrotic AP absorb and Evil Eddy 3* orbs are put in here.

Following the above setup will use 114 SP out of 120. Leaving you 6 SP to put into the level 75 Devil passive. However, you may choose not to add to these passives and get some other passive instead.

Alternative SP options
As mentioned above, you may or may not go for the Devil Force passive. The benefits for taking those passives are as followed:

Techniques
Most of the techniques are fairly useless. However, you sometimes need to fill your power marble to increase your damage output. The only thing that can fill the marble gauge is making successful hits with techiques. Below are the three most useful or easiest techiques to fill the marble gauge with.

Rebound: This is your main techique for filling your gauge. Rebound only hits once and fills 33.3% of your marble gauge. It is extremely fast and has almost no recovery time. For mobs that can be knocked around, it propells them in the air past and behind you, allowing you to turn around and juggle them with basic combo(or, with the right timing, put them back on their feet and locking them in back attack). For unknockable mobs, it does nothing and you get a free hit to fill marble with. Using rebound requires some practice, as it hits a character span in front of you, but does not hit a mob directly in your face(unless it’s a big mob).

Dominate: A more uncharacteristic technique. This technique hits directly in front of you and doesn’t really do anything to the mob besides pulling it a little closer. This techique will fill 33.3% of marble gauge IF ALL ITS HITS LAND, which makes it less stable than the other 2 techiques in this list, but better than other techniques. This techique is about a second long.

Flash Sword: An alternative technique to rebound. Like rebound, it will not hit an enemy directly in front of you. It actually is kind of like blink and will teleport you a short distance foward before using the sword. This techique will fill 33.3% of your marble gauge IF ALL ITS HITS LAND, however it pushes forward and is somewhat easier to get hits than dominate. It will land 3 hits on the enemy which will lock like regular melee attacks do(it can also trigger counter attacks). This techique has a long action time and you’ll be pretty vulnerable using it. However, if you don’t want to push mobs around by using rebound, you can use this.

Note that when I mention filling 33.3% of the gauge, it is in regard to a SINGLE ENEMY. If your technique hits two enemies completely, it will fill 66.6% of your gauge. If you hit 3 enemies or more, it will completely fill and activate the gauge.

Some inferior techniques which may be used to fill your marble gauge:

Far Away: This technique only has one hit and hits all around you, actually very good to fill your gauge with. However, it also throws what you hit into the other side of the screen. Which makes it unuseful because it’s almost impossible to control where the mob will go, and now you can’t use your special to hit all the mobs you were going to hit.

Shatter fist: This technique is kind of like dominate, but it’s harder to hit with. It also knocks enemies into the air. Might be useful for utlity, but not a solid choice for filling your gauge.

The skill bar
Finally, it’s time to fill up your skill bar with your skills and get dungeoning. Here is a sample of what your bar might look like. 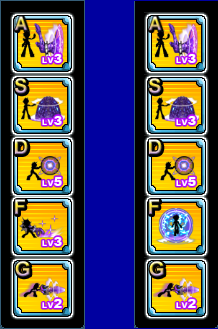 Skill bar 1 is actually a replicate of my own bar. As my Dio does not have very high AP regen, I cannot continuously use high AP cost skills. Adding dominate in addition to my main technique, rebound, allows me to activate my power gauge faster and easier, to boost my damage whenever I want.

When you have enough AP generation, your bar might look like bar 2. It’s basically the same bar, but now with black space taking up one of the slots for more aoe ownage.

Do not take evil eddy until you have its enhancement from 4th job tree, put black space in its place or an alternate skill like flash sword, vengeful sword, or infernal spear.

Some other good choices that can go on your bar include Cool Spiral: a 1 bar delay skill, Chaos hit: the level 75 Dusk bringer skill, it costs no SP to add and does great damage, Blink(if you added it): instantly teleports you a short distance foward in the direction you’re facing, low cost and low cooldown, good for escaping dangerous situations in a hurry.

I would not recommend using Innocent Fear as it is. This 4th bar has been nerfed hard, and it does really terrible damage and is not worth using all that AP for.

For lower levels:
Before you are able to get both black space and necrotic, here are some decent skills that you can put on your bar and some advice on progression…
Level Vengeful sword(first skill in Weapon force) at least once, this skill does good damage and in most cases the hits will stack.
Try to max Devil force active in 1st job after this. Any points you spend on anything else will just make it take longer to get to black space. You won’t benefit much from the passives at this point and devil force is generally better than weapon force at this point.
Death Star: does decent damage, does damage on throw and on return.
Rake hand: your major damage dealer until necrotic and black space.
After black space, grab second job attack combo passive as soon as possible, otherwise, make your way to onrush in the weapon force tree.