Hello, my name is Robert and this guide is aimed to be the first thing new players see when visiting the forum.

Because the current user interface could cause some confusion, I have made this tutorial to explain the basic steps and options ensuring you can succesfully play a game. Because most of the questions asked in the ingame chatroom are left unanswered.

Let’s start of with the most basic options in the screen: 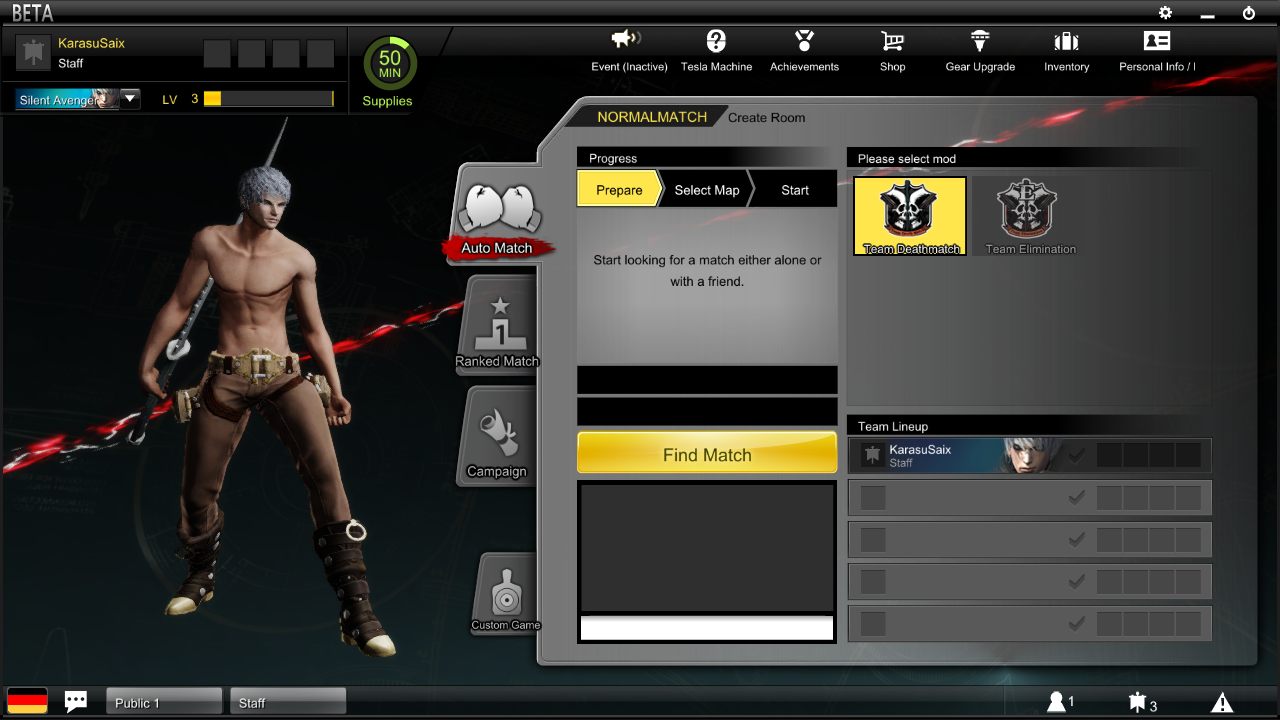 The first thing you should do when you enter this screen is ensure your region settings are adjusted correctly. Now there is a small catch to that because of the current beta. Only around 100~ players are online at peak hours, so finding a match in your own region (France, UK, Germany, Netherlands) is nearly impossible. We always advice people to set their region system to Europe, because this will assure you of a game in the first place (side note: the region system was introduced to enhance gameplay because of major lag issues. In the coming patch, this will be fixed entirely according to P7S1). 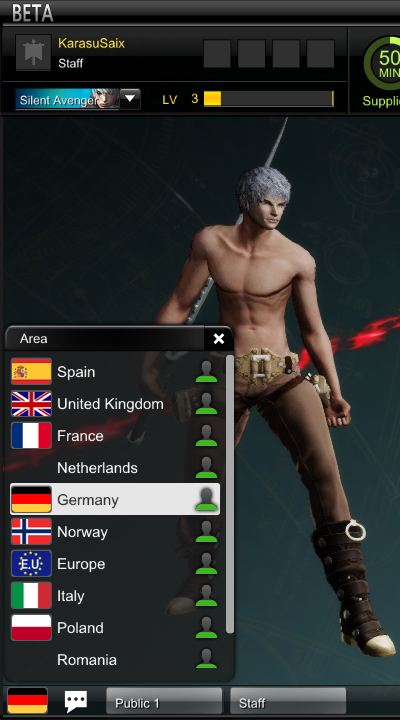 You can adjust these by clicking at the left-bottom icon, and choose “Europe” the region swtich will be enforced when you re-enter any room. Speaking of rooms: 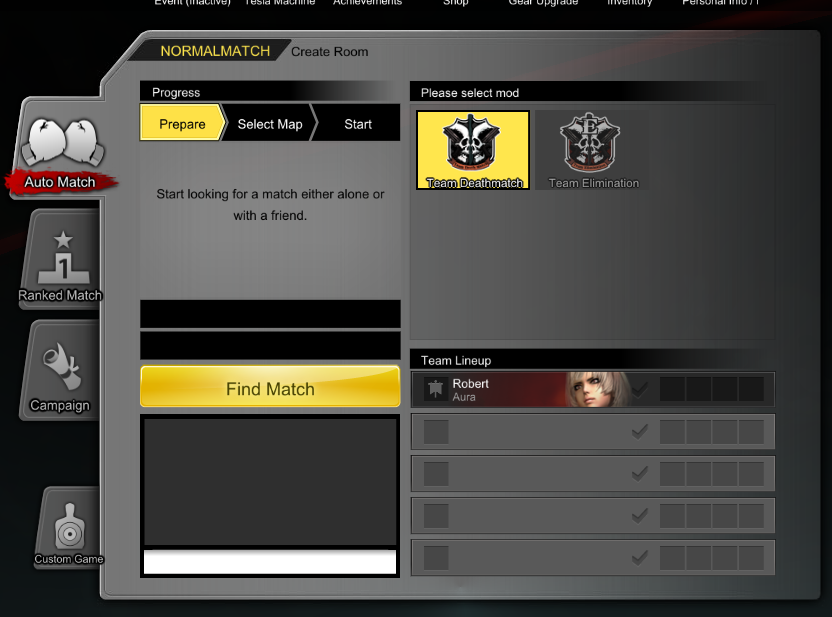 In GunZ 2, we have 4 types of matches, being Auto Match (which is quite similar to clan war, and gives the highest rewards ingame). Ranked Match (which hasn’t been released nor explained yet). Campaign (Which is basically questing and also includes the tutorial which you can optionally start with when first entering the game). And finally, your biggest friend for the first 20 hours of the game, Custom Game, which is actually the same as normal games, back in GunZ

Auto match is a game form in which you cannot control your enemy team. It’s the most competitive form of match you will find, and most of the time, a ‘premade’ will be formed before hitting the “find match” button. Hitting the find match button will put you, or your team (4 man strong at top) in a queue. As soon as 4 other players are being found you will be matched against them. You can see their names, but not the characters they are playing, when the map is chosen (15 second gap upon matched). The characters and players get locked and the match will start.

Matches in automatch are extremely intense. It currently gives a combination of rewards that is the highest of all possible match types that we currently have. A won match will give all of your teammates 1300 gold, 120 exp and an increase in ELO rating (which I will explain later). Even when losing, you will receive 800 gold and 60 exp, which is nearly 3 times as much as a won custom game.

Campaign, or quest as people still call it. Is a series of PvE games that can be fought solo, or in teams. According to the size of the screen, 10 people tops. 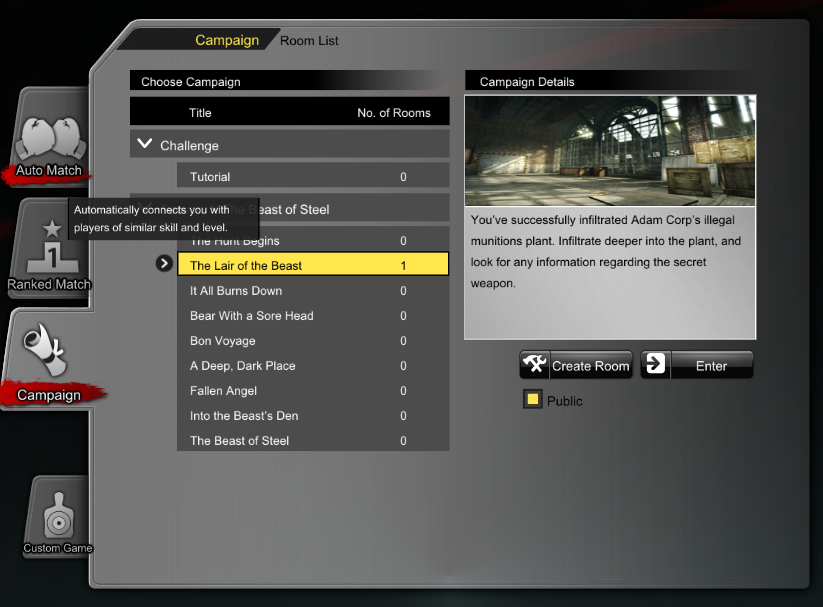 As people that have played campaign already can see, I have completed all the levels already, and therefore I can replay any mission of choice. The normal way this goes is that you unlock a new mission after completing the first one. As a newbie, I advice you to team up with other people to complete the quest. It could cause some problems if you have no idea what you’re doing.

Campaigning is the second best way to earn gold / exp. And the best part is, you can do this solo. You do not have to wait for other people to join in or get matched. The earnings vary between 600-1000 gold and the exp is between 60-90 per win.

Custom match, or practice mode as I prefer to call it, is a type of match that has no negative impacts on your rating or score, and is great to practice your skills. All types of battle can be fought here. 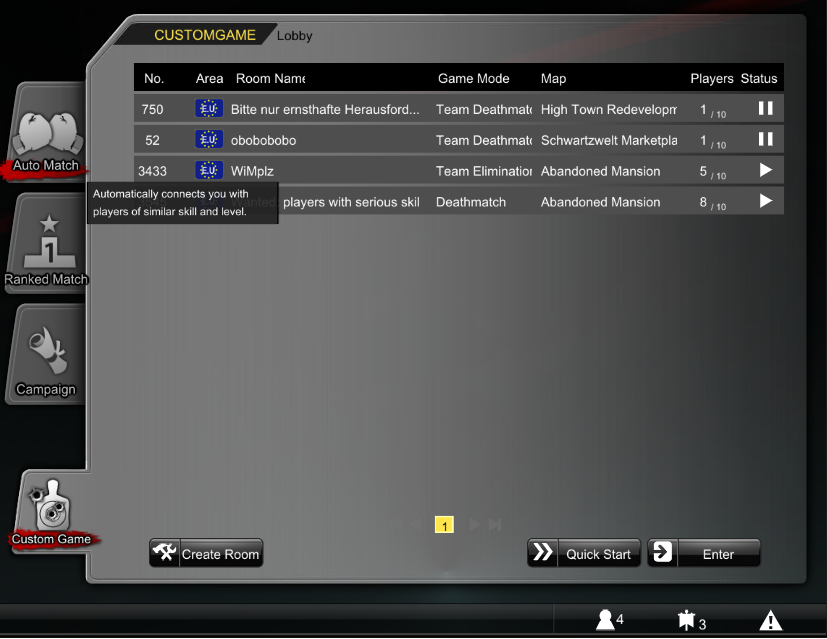 Now, custom match is quite like auto match, except you can leave the game at any point you want, and you can see the class your opponents use. Therefore, much more control and fun is ensured when playing custom match. I’ve seen new people in auto match ragequitting the game and directly uninstalling it because the matchmaking isn’t really working with 12 people in queue. 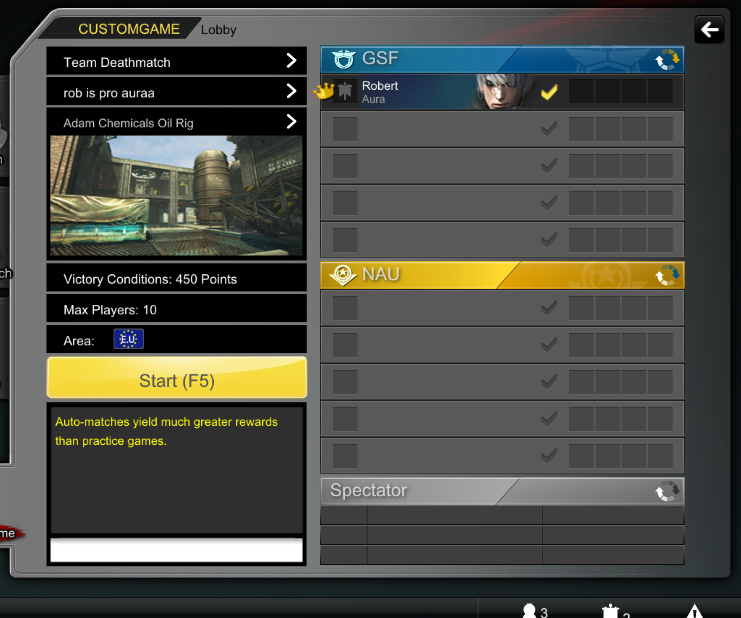 This is how a general lobby looks, as you can see, the game mode is Team Deathmatch, the room name below it is.. Well, a bit narcissistic and vain, the map is currently set at the oil rig.

Pretty self explanatory isn’t it?

I might update this in the future, but for now it’ll work