Long story short. This Guide will be about a successful 95% evasion build on a Sorcerer x Bard, my character is a Sorceress but whatever. Definitely, I don’t want to make a guide anymore because of retards and forum elitists though this guide would definitely give a good reputation to our guild and live up to what we said that “we are a bunch of guidemakers packed in a hardcore guild”. Yes, I’m advertising our guild. Moving on.

II. Why an evasive Sorceress x Bard? Yes, I used Sorceress because I want to.

1. Grimoire gives 5% Eva while your Envoy as a Sorc/Bard has an option to get Song of Winds which gives a good amount of Eva thus, to utilize these, we need to go for the path of Eva.

2. Damage was never a good stat for Sorcs because it doesn’t affect DoT where our main damage comes from because based on my guildmate, Sefi’s thread, here’s the following skill amplifiers of a Sorceress,

then we take Gunslinger’s skill amplifiers for comparison,

As you can see here, it is clear that Sorcerer’s skill amplifiers are low and the best ones which is Devour Soul and Flame Impact has quite a bit longer casting time than the others, which is bad. Seeing more of the picture, basically, if you took Dmg+Crit set on your Sorc, you only benefit as much from Crit, while you get low returns from the pumped Dmg stat which is why we are going for the Spd Eva set and more information regarding it will be explained later on.

3. On PVP, ANY DPS class is squishy and Sorc is part of those DPS classes but being squishy is a big big problem for Sorc because how can you provide good crowd control (Nightmare Totem) if just getting near to enemies would spell death? The answer is obviously become tanky enough to close-in and make enemies sleep towards their death. This is also a good for countering Bards hiding behind since they won’t be able to provide heals for 6s unless they were attacked and woke up.

4. On PVE, your role will always be to lure all the mobs inside “most” dungeons and spamming CC when your party starts to kill the lured mobs. It is convenient for a Sorc to lure because we have Rejuvenation Mantra which dispels a random debuff (like Slows) when casted and sleep totem to reduce the pressure from the chasing mobs. Once the mobs are clumped together, Sorcs can hit most of the mobs with their DoT since most of our skills have about 2-3m aoe from the original target, very convenient.

Okay, that’s enough with the boring introduction and let’s start building her up, yes “HER”, cause I’m using a Sorceress. 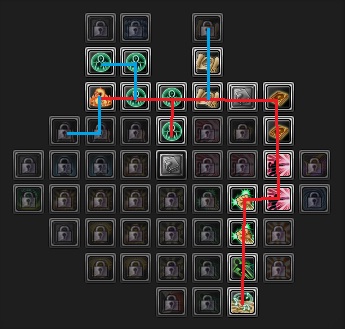 Red Lines is your priority then the Blue Lines can be taken once you have spare points. And NO, we are not taking the Lv2 Eva passives because NO, they suck, only worth getting is Lv3 Eva passives but sadly we don’t have any of that on our Envoy Path.

Dreamy, why did you heff to travel all around the world just to get Song of Winds? Because it’s dumb to get the Lv1 Passives which provides INSIGNIFICANT stats. That’s basically it.

We will be focusing on Spd+Eva Armors because as I’ve said earlier, getting Dmg+Crit would only give effective DPS increase from the Crit while giving low returns from the boosted Dmg. Meanwhile, Spd+Eva is very good for spamming skills due to fast cancellation of skill animations and lower cooldown as well as it decreases the interval of ticks on our DoT skills PLUS it gives Eva which you benefit from ALOT, again, ALOT unlike Dmg. Also, Spd+Eva usually gives much more base defense and HP, that’s a good bonus.

Armors
Would be Full Set of Requiem, might as well buy those unwanted Martial Lunar Cores from the TH because people don’t want to build Crit+Eva because MAJORITY thinks it is not possible to build Crit+Eva due to the armor sets suggesting stats otherwise which is why it’s cheap.

Accessories + Cloak
Nazrudin, definitely Nazrudin. It gives Crit+Spd+Eva. Another convenient thing to buy because people thinks this set is useless as it doesn’t give any HP at all. The missing HP will be covered by Sorc’s 12% HP passive from the main envoy and the bonus from Requiem Set so don’t worry, you won’t have very low HP at all if you follow this build.

Trophies
Argus is love. It’s either you go for a Green Argus + Orange Argus or Orange Argus + Yellow Argus. Argus Trophies gives Crit+Spd+Eva but the Yellow one gives Crit+HP+Eva which is a nice boost for HP while still giving Crit+Eva.

Weapons
Self Explanatory. Go for both yellow Book and Harp. Prioritize getting 135%+ on your Book while get a 100~120% Harp. A bonus tip: Getting a Lv50 Harp would definitely help you perform really well as a main Healer on a party, YES, you heard me right, a main Healer even though you’re a sub Bard. I am doing Hard runs with just me as the main Healer but you need a decent tank for this.

Sigils
Definitely get 2% Eva on each although I’m using one 6% Crit Dmg sigil on my Harp because of my freaking OCD, I want to hit my Crit Dmg to reach 155% so it looks nice. Note that you MUST get Ambient Drone +5m range for Head, Holy Notes -10% CD for Waist and Healing Tones -10% CD for Boots to act as a decent sub-healer. 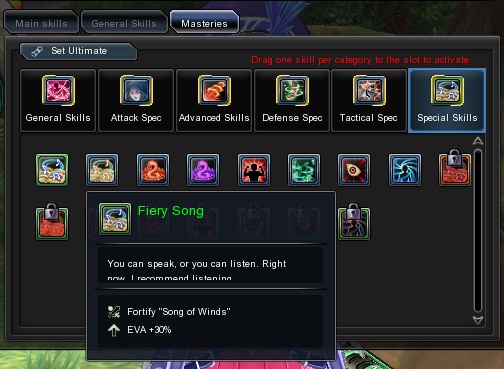 Most are self-explanatory. Note that I emphasized on how I got the Fiery Song upgrade, you can buy it on TH for as low as 10g because again, people think it’s useless, very convenient for me <3

Stats
For Defense, it is a MUST to put all to Eva unless you already reached 95% in a different way, then invest on HP so you can survive better from bursts.

For Attack, it depends on how you want to play your Sorcerer.

1. Off-Healer Build
Basically, to be an effective Off-Healer, you need to reach about 40% Spd so you can reach 50% with the help of a Gunslinger’s party buff. All other stats should go to Crit until it reaches about 30%, after that, all stats left will go to Dmg.

Why is Spd important as an Off-Healer? It’s because of the casting time and cooldown of skills. High amount of Spd is always good for spamming utility skills.

2. Maxed potential DPS on this Eva Build
Of course picking Eva definitely compromises some of your DPS output but you can still maintain an above decent DPS with the help of min-maxing your Gears and Stats. First, at least replace one of your 2% Eva Sigil to a 6% Crit Dmg Sigil then use Callousness on your Ultimate Passives for a total of 10% Crit Dmg. Since you already have a base of around 25% Spd, might as well put some stats to make it reach 30% for .8s ticks. Next is pump Crit to 30% then all other leftover pts should go to Dmg.

But Dreamy, doesn’t that mean that Crit is still better because Lv40 Crit already gives 20% overall DPS increase if you have 300% Crit Dmg? Yes, Crit is better than Dmg but as an Eva type, you will only have an average of 200% Crit Dmg (Base+Envoy) meaning you will only get 10% DPS increase from Lv40 Crit in solo terms. Of course it will change when there’s Wiz Buff and Bel x Uzu Buff around where you can almost reach 300% Crit Dmg but actually, even if you manage to hit nearly 300% Crit Dmg, it’s still bad to invest much more on Crit due to it’s fast diminishing returns.

This is where Dmg comes in, Dmg stat boosts all of your damage output even DoT by flat .35% per level. At Lv30, it gives a flat 10.5% overall damage boost. Now this stacks multiplicatively with Critical and Speed meaning you will definitely get much more potential DPS increase with some Dmg and a decent amount of Crit and Spd.

I actually tried to avoid too much math cause it will get too confusing but basically, stacking too much Crit is bad because it diminishes too fast, it’s like how 1+1 gets 100% boost but 2+1 only gets 50% boost. While pumping Dmg will be a really good flat DPS increase as it also stacks multiplicatively with Crit and Spd which definitely gives better results and finally, giving you much more potential DPS. I hope that’s clear for everyone!

1. My last best performance on Moonlight, my original character where I started the 95% Eva build, sadly, she went missing after the server crash on Siren and is still in the process of recovery/restoration, or maybe gone forever, 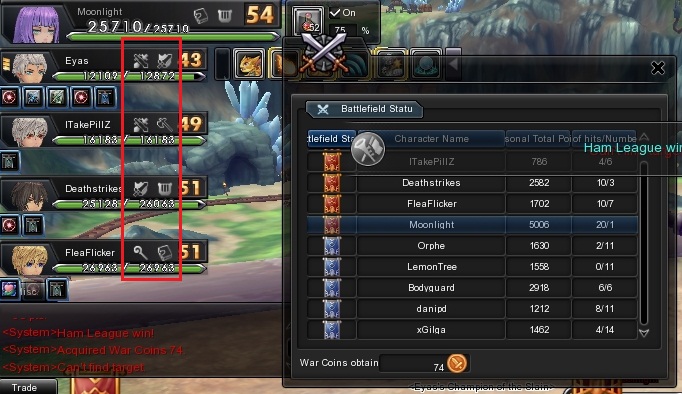 Only problem you’ll have on PVP is being against ranged DPS with Accuracy setup, which is rare to encounter honestly,

First problem is Cannon, Cannon naturally have 10% Accuracy and they can get another 10% from another Envoy which results to 20% Acc for free. Next is Wizards, they naturally have 10% Accuracy and they hit TONS much harder than Cannons when they actually land a skill on you. People think that if you built Eva, it’s easy to counter with Acc but truth is, building Acc effectively lowers DPS also meaning it would indirectly give more survivability to Eva builds and if they did manage to hit around 45% Acc, you are still technically, 50% tankier than w/o Eva and due to your gears which is Spd+Eva, you naturally have high defense and HP compared to Dmg+Crit sets. There are alot of people who pump HP on their DPS classes but don’t be intimidated by them, HP or Def build on a DPS class would still result to a VERY squishy class. Just look at the 50k HP Cannon class lol, 50k HP for what, my guildmate can still 2-3 shot them while I can possibly kill that guildmate of mine w/o even recieving a single hit.

2. Damage Output
My damage output is still high. I can kill of a 40k+ HP DPS Class in just 1 set of DoTs. Of course it is different if the enemy got healer, but that’s where your tankiness comes in, you charge in through the enemy and make the bard sleep so you can kill any DPS class with ease.

How can you kill a Bard by yourself on 1v1? Stack all your DoT, keeps stacking it since the Bard won’t be able to kill you too anyways lol, after you see that you managed to stack Big Game Hunter 15 times and Cursed Seal 10 times, you put the Bard to sleep then press ESC to stop auto-attacking and let the DoT sink in for 5 more seconds while the Bard is unable to heal, afterwards use your Ambient Drone to extend the Bard’s inability to heal due to stun then start spamming your DoT’s again until the Bard is dead. If the Bard is still alive then your match will end as a tie or the one with higher % HP left wins.

In terms of PVE, you can just lure all mobs as always and just spam your skills when they are clumped together, your Nightmare Totem helps you stack the enemy in a straight line making it possible to hit them all with Flame Impact. I’m pretty sure my actual damage on a single target is still pretty decent but ofc, not as good as dedicated DPS machine builds but definitely NOT low.

Anyways, thanks for reading. This guide is prolly a “Break the META” build so make sure not to follow the strict META 99% of the players give, explore! -iDreamy