I made this because there are tons of misleading posts everywhere and this is needed so people would be CLEAR on how Sorcs actually function as a semi-DPS support class.

First, the most important thing of all, are Sorcerers hardcore DPS Classes?
The answer is disappointing and hard to accept but “NO”, Sorcerers are NOT hardcore DPS Classes. I’ll bring here the list of ranking on DPS Classes based from what TW players have gathered from their long experience in playing Fantasy Frontier, the TW server of Aura Kingdom.

Is this a fact? Yes, IT IS and here are some proof.

So first I have to explain how these amplifier works. A skill naturally has an Amplifier + Fixed Damage based on Level. Example, 140%+10,000, to get the final damage from this, you need to get your raw base damage then multiply it with the amplifier then add the fixed damage based on level. Let’s take Wiz weapon for example which has 20.5k base.

The formula would be (20,500*1.4)+10,000 = 38,700 damage from that skill and it will show on the Tooltip. Now that we know how these amplifier works, we move on to comparing the base damage of the class + the skill amplifiers against another Class and right now, we’re comparing Sorcs against Duelists.

Okay, based from the Weapons, it’s obvious that Grimoires lose to Dual Blades in-terms of base raw damage while we also lose on the Skill amplifiers and THIS is not even what’s worse. Now we compare the DoT of both Classes and see which is stronger.

Based from a Guildie who has a Lv59 Duelist and not using +3 Skill Cards, these is the following available DoTs on his arsenal.

Here’s mine as a Lv60 Sorc with +3 Skill Cards on Demon Seal and Blood Seal and upgraded version of Corrosive Shadow as well as +5 Flame Impact from Zaahir Grimoire.

Conclusion: Clearly, not just on the raw base damage and amplifiers but a Lv60 Sorc with upgraded DoTs LOST to a Lv59 Duelist with just default leveled DoTs.

OFC, I do know that Sorcs has debuffs which helps others in dishing out more damage which technically increases Sorc’s DPS but being a half-assed DPS and a debuffer won’t cut it, even other class like Cannon can deal much much more damage output while giving -def debuff on the enemy target while also providing very good AOE damage with Meteor Cannon to clear floor mobs faster.

This will get worse when comparing with Wizards and especially Gunslingers with their ridiculous amplifiers along with Discerning Attack. Anyways, hope this helps.

Edit: I forgot to mention that this is not finished. I will also include how the DPS of Wizards and Gunslingers are worlds apart compared to Sorc’s Raw DPS and as well as how you can be a BETTER Sorcerer and have a very fitting role for the current content.

Skipping the Wizard and Gunslinger comparison for now.

Moving on to “How can you be a better Sorcerer?”
Okay, I won’t argue that a Full DPS Sorcerer can do casual dungeons easily. I mean, who doesn’t? Even I can build a DPS Bard but can still manage to finish casual dungeons easily. My main point here is that there’s no sense being able to do well on casual dungeons, your AIM should be how to be a viable class to bring inside end-game content and the best example for this as of now is Infernal Abyss.

First, let’s look what a Sorc can offer inside Infernal Abyss with DPS Setup. As a DPS, you’ll automatically eat a slot of a DPS. Now, you can’t really charge-in to the mobs and put them to sleep because before even the Totem lands, you’re already dead. Basically, you have to wait for the Tank to move in first and take the aggro of the mobs. Okay, you can make the mobs sleep too so the burden of the Tank would be lessen but IS THIS even necessary? Nope. A good Tank won’t die easily unless the Bard tries to be funny. Next, even if the mobs are circled around the Tank, would your Sorc still be able to hit all the mobs? Yes, but just with Nightmare Totem, otherwise you’ll be trying to find a good angle for Flame Impact to hit as much enemies.

Summary? Basically, they would end up better with bringing a Wizard, Cannon or even Gunslinger instead. It goes w/o saying that a DPS Sorc won’t offer much inside Infernal Abyss. You’re basically a burden. Why better Wizard? Cause a Wizard can dish-out more damage while clearing floor mobs easily. Why Cannon? Because they have -def debuff and better AOEs to offer as well as better single target DPS. Why Gunslinger? Because Gunslingers would definitely make killing Zaahir tons easier compared to your half-assed DPS.

So what? Sorcs are practically useless? Nope. Let’s take a look back when we decided to create a Sorc. 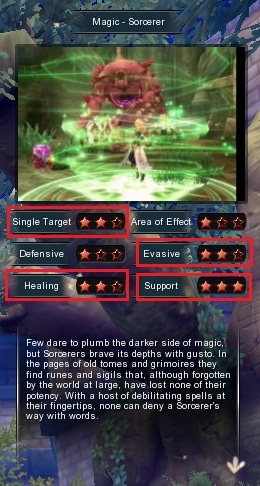 As you can see here, IT IS CLEAR that Sorcerer excels in support and Crowd Controlling is part of being a Support as well as doing tons of debuffs to make the enemy easier to kill.

Single Target **
Everyone should agree with this! No one should consider Sorc as a Hardcore DPS or Boss Killer whatever BS. We do NOT excel in dishing out damage on single targets but at least we do DECENT amount of damage.

Healing **
Obvious. A Sorcerer can actually act as a main-healer for casual dungeon runs and a sub-healer for end-game dungeons.

Evasive **
You should NOT ignore this and just go YOLO Def or HP because that won’t get you anywhere. You’re just wasting the potential of a Sorcerer. IMO, it’s a must for Sorcerers to get an Eva build because they can actually hit the cap of 95%. Also, using Spd Def Eva set would be the only thing most beneficial to Sorcerers as explained on my Windwalker Guide.

Support ***
Of course, three stars. Sorcerer has the BEST crowd control in-game which is an AOE sleep, Nightmare Totem. It’s a 6 second debuff and can be spammed to keep the enemy asleep permanently or if they awoke from being attacked, it’s fast cooldown can just make the enemy sleep again. This also prevents a team from dying so fast from a bunch of mobs on casual runs where people usually lure mobs and kill them in 1 go.

So putting them all together. You get a Full Support Sorc while being able to dish-out decent DPS. Since we only have Infernal Abyss, what would be your best role there? You will be the one who will act as a Tank and do the crowd controlling.

Is this even possible? Yes. I did it and it went successful. I have a 95% Evasion Sorcerer and I can still dodge well even on floor 35+, we can even reach 40+ and prolly Zaahir if we had more DPS. Basically, my role was to tank the floor mobs and compress them together. Stun them with Ambient Drone > Put them to Sleep with Totem > Let the other Bard stun them again > Wizard or Cannon uses AOE immobilize, with this kind of setup, it is guaranteed that the mobs will be disabled for a very long time which is enough time to eliminate them. It is obvious that a Sorc can dish-out more damage than a Tank so bringing a Sorc can actually be even better! Actually it is. On Zaahir, it’s easy to just kite him to death, Tank is not necessarily needed and with you replacing a Tank, it is guaranteed that Zaahir will be killed faster because ofc, you have a set of debuffs which makes the boss easier to kill along with decent DPS.

So what is the actual real META? Yes, I think I am mistaken when I said that my Evasive Sorcerer is a “break the META” build but it’s actually the REAL META of Sorcerers and even the ratings from when creating a Sorcerer suggests it.

Now with this. If you have an Evasive Sorc, start building your own team for Infernal Abyss w/o a Tank, you don’t need a Tank. Tank is for pussies, just kidding ;P Anyways, it’s obvious already what a Sorc can offer so I won’t say it here one by one. You should read the skill descriptions yourself.

Okay, before finishing. I’ll put here some Disadvantages of a DPS Built Sorcerer.
1. Half-assed DPS output. Compared to Kirito you’re nothing and it will get worse when compared to Wizard and Gunslingers so your DPS Sorc is better replaced with another DPS Class. You also LACK AOE skills which makes you more lame and you should feel bad about it.
2. You do NOT benefit much from raw damage increase from Gears, Envoy etc. They all go to your lame amplifiers which is… lame. You still do lame damage output even if you pump alot of raw damage, try making a Wizard instead and pass your Gears to that Wiz and see the BIG difference. Only Dmg stat from letter C will pump both your raw damage and DoT.
3. How to crowd control when you’re dead before even landing your Totem? Obviously, a DPS Sorc can’t tank anything and will be as squishy as other DPS Classes.
4. Oh, you’re pumping damage against flame Sigils? Well done, it doesn’t work on your DoTs, congrats.

Will be updating if ever there’s more to include but that’s it for now.