Disclaimer: This is a work-in-progress guide. The author doesn’t force anyone to follow or copy, everything in the content. Use at your own volition.

Hi. My name is Mel and I have been using my Duelist/Guardian Scorpina for about a month now. Having used her for just about any situation led me into creating a guide for all Duelists in search of help and information. I know that the Duelist part of the forums might have been crowded with guides, but I just can’t find a similar style of play from any of those. Katsuie’s got her Duelist/Sorc, DarS might have gotten Duelist/Guardian before but switched, and others are discussing about other Duelist/Insert-Subclass. Hence, with no further ado, I present to you my way of peeling stuff from tanks.

You might be wondering why I started discussing about my Eidolon first before my stats. Well, as many currently don’t know (or just doesn’t give a **** about), is that your Eidolon gives you STATS. So lemme start by introducing… 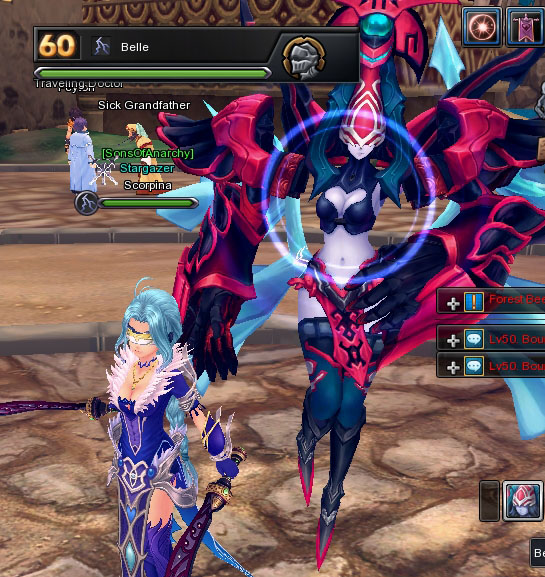 Bel-Chandras are Duelists’ bestfriends. Their main stat turns out to be CRIT thus sharing a bit more of that stat compared to others. Also, Bel-Chandra’s skill SHOCKING DANCE gives you and your party mates CRIT and CRIT-DMG. This plays a large factor when we discuss the next part which is stats.

Other worthy Eidolon partners would be:
Uzuriel (Basically the same as Bel-Chandra, albeit harder to grab)
Eligos (Preferrable for PVP since he gives DMG and ACC)

Now I let you see the difference of having an Eidolon and having none in terms of stats. 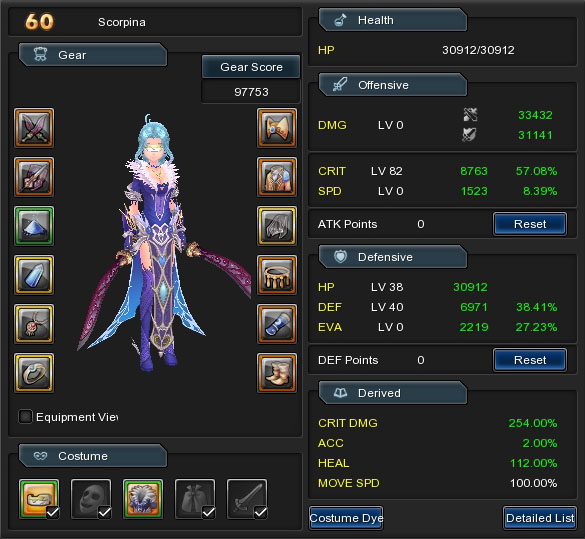 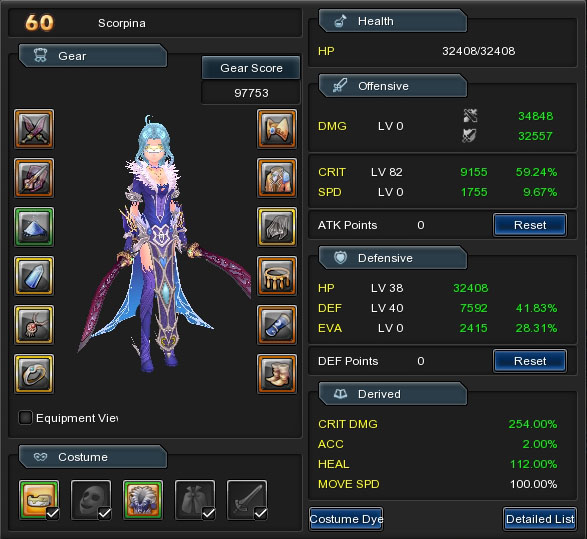 OFFENSIVE STATS:
As you can see, I’ve invested a fair share of my offensive stats into CRIT. CRIT does merit its own benefits since it means you can proc HIGH CRIT-DMG critical strikes more frequently.
Bel-Chandra also gives you help in the CRIT department as aforementioned. CRIT-DMG is mostly gear dependent except for the usual Eidolon buff, consumables and Envoy’s Path, though a brunt of it can be given by the Duelist Skill SNOWFLOWER. 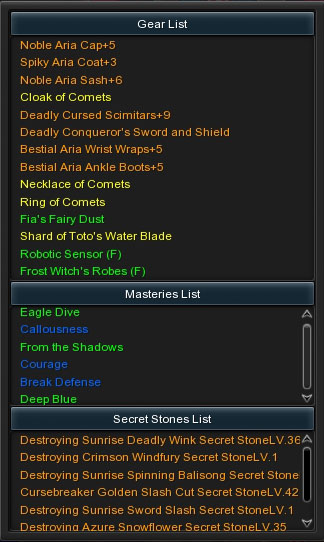 I have crafted my main weapon and my off-hand weapon using CRIT-DMG 15% Supression Cores giving me a total of 30% CRIT-DMG on weapons alone. If you noticed my Secret Stones, it would tell you that I also have CRIT-DMG from them. This set enables me to clear out mobs with ease. In case of PVP, I have also crafted another weapon set with ACC 15% cores.

You might ask me, WHY FIA’S FAIRY DUST and not ARGUS’S DRAGON HEART? Well, the answer lies in my CRIT-DMG. 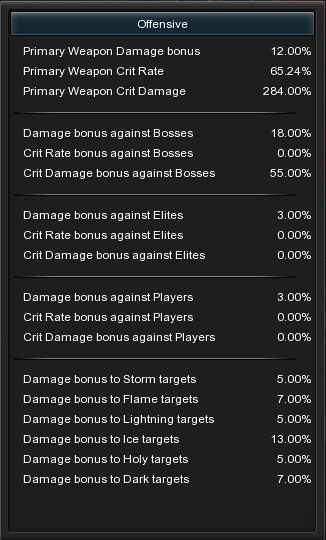 CRIT-DMG caps at 300% at the moment and as seen, my Primary Weapon Crit Damage is already at 284% without Bel-Chandra’s CRIT-DMG buff. Her SHOCKING DANCE can be applied every 6.5 seconds and lasts around 10 secs, which would mean I’d have nearly permanent 300% CRIT-DMG as long as she casts the skill. I wouldnt leave anything to chance, so I got the other trophy instead.

Here is it applied. 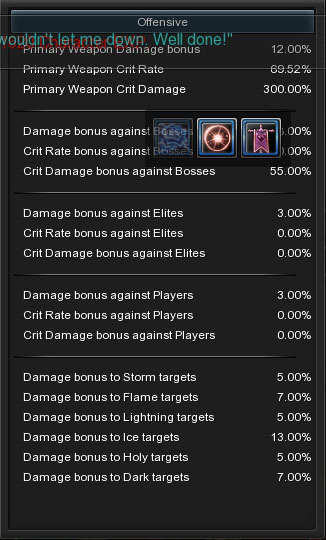 DEFENSIVE STATS:
My defensive stats are a no-brainer. I just so happen to like having 30k-ish HP without compromising DEF so I balanced it out. Having said that, it does help being a Guardian Sub. Why? Because the Guardian’s 2 defensive skills, namely PHALANX andMIRRORED SHIELD can go hand in hand with the Duelist skill PURPLE LIGHTNING. Phalanx lowers damage taken by a fixed number in addition to Purple Lightning’s -20% Damage taken. In exchange, Mirrored Shield returns back a fixed amount of damage to the enemy. With these 3 combined, you could have the upper hand in PVP duels and boss fights.

DEFENSIVE EQUIPMENT:
My duelist gears offensively just because I think duelist should focus more on dealing damage rather than sucking them up. If you really wanted to survive, you better learn to dodge Red AOEs of bosses and mobs, plus, invest in elemental armors. Just to be sure, at least upgrade your gear up to +9s to have DEF. 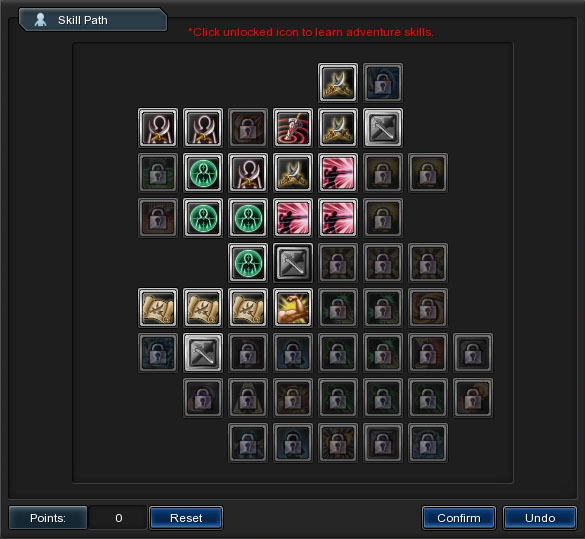 Technically this Envoy Path route focuses on having more DMG, CRIT, CRIT-DMG. It also grants you 2 passives. BAT FANGgrants you heals equal to 3% of the damage dealt to enemies. The other one, FRENZY, grants you 25% chance to deal more damage over time. We also got an ultimate SANGUINE BLADE for several purposes to be discussed later.

I have two mastery sets. One for PVE and one for PVP.

General Skills: Eagle Drive – More CRIT = More Burst Damage
Attack Spec: Callousness
Advanced Skills: From The Shadows – The damage buff from Purple Lightning means you dish out more damage in a short amount of time using your skills rather than let people die from your DOTs. Sometimes a second may spell a win from a loss.
Defense Spec: Extreme Speed – We get this for the movespeed buff, not for the EVA. Makes chasing easier.
Tactical Spec: Expose Weakness – The typical counter-Bard/counter-healing spec.
Special Skills: Dust Fragment – If my ultimate crits, its usually insta-win, with my CRIT-DMG and all.

In order to get the utmost DPS-DOT you can deal on a target, you have set your skill succession. First we have to learn thatDuelists have 3 AOE skills in their arsenal namely Slash Cut, Deadly Wink and Dancing Balisong. Slash Cut hits targets infront of you. Deadly Wink and Dancing Balisong have larger AOEs. With this knowledge we could build a rotation for every situation.

Why didnt you include Dancing Balisong on Boss/PVP fights?
Dancing Balisong is reserved to heal HP on crucial moments. Feel free to insert it anytime in the rotation when you need a quick heal. Sanguine Blade is considered to have the same as Dancing Balisong’s use though it could also be used for dodging Boss AOEs.