Clash of Clans Anti-Hog Base Guide

Clash of Clans Anti-Hog Base Guide by OJM

No riders, no worries: 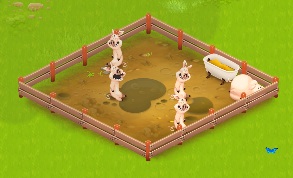 Just install Hay Day, as on CoC your chances to defend against proper hog-attacks are pretty much zero.

First thing you have to realize, is that both 9 & 10 have enough defences to make it work but only 10 will have enough firepower to defend against hogs reliably. Th9 will manage if the traps take out enough of the hogs but a 10 can pack enough punch to defend repeatedly… Which tends to happen when such a base is properly made and upgraded.

So what makes a good anti-hog base? Sad reality is, it’s made to fend off one type of attacks but will not be as effective against all possible attackers. Good side is that 2500+ trophies, the hog attacks are very common.

A typical, well-working, anti-hog base consists of 4 layers:

The center of the base, where you want the hogs not to show up. TH, xbows, infernos and maybe mortars (and possible AD) goes here. CC, King and Queen help, but they can also be placed to buffer, if you run out space in the core.

Maximum firepower and range is what it all boils down to. 2x lvl3 xbows can’t out-dps a heal spell, but infernos can. The core also can’t be too big as you need enough defences to go to the third layer.

Important part of the core-building is that you make sure that you overlap every square of the to-be hog-ring with as many defences as you can. CC in the middle makes it harder to lure, but an experienced hogger can and will lure the CC/Bk/AQ and get rid off them. Therefor one can consider placing the CC to the buffer. The buffer is the area between the core and the hog-ring. The width of it varies from 3 to 5 squares. Less it is, the more firepower you concentrate to the ring, but you risk a leak to the core. The buffer must not have a single defence building on it.

3 thick buffer is typically the moat. Wall-gap-wall. Simple, effective. But whatever you do, don’t put the teslas in there. That will ruin the whole idea of the base and will lure the hogs straight to the middle. The moat can be 1 or 2 squares broad. You can hide the Bhs in the moat and maybe some more stuff to the corners. Just remember: No defences there!

Answer: Leak protection. You don’t want to have the hogs to the core until the attacker has spent all spells and most of the hogs are dead already. The bigger the distance, the less likely the hogs will wander into the core before the ring is done. 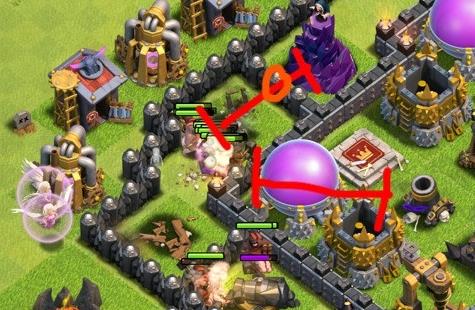 Even such small things make a difference. A wall counts as distance to hogs so without the inbetween defences-wall, the distance is different than with it.

I’ll explain bit more about the leak on the next chapter.

All the remaining Defences, side by side. That’s pretty much what the ring is. You form a full circle around your buffer with the remaining defences. Yes, your ADs will be exposed for bloons but there are ways to handle that (more later). When placing the defences, make sure the distance between two defences is less than the distance to the core. 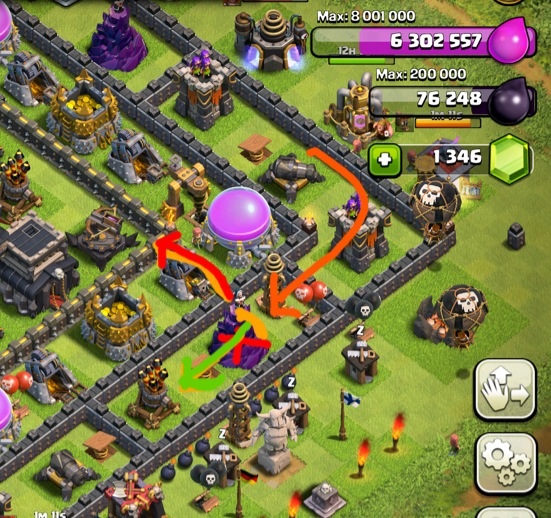 Something to consider on the distances: Hogs move on ground. When the building is destroyed, the hogs aren’t in the middle of the place where the defence was, but on the edge. What’s the shortest distance to the next defence?

Springtraps are usually placed on this ring, between the defences. A full load of traps can take out almost half of the hogs out of game. Try spread the defences evenly all around as that will protect against other types of attacks as well.

The idea of the hog-ring is to keep feeding the pigs with less important defences while grinding them down with all you got. The smaller the ring, the more firepower will be concentrated on the hogs. Yet on the same time, usage of heals is bit more effective if the hogs don’t wander too far in between the defences. It’s a fine balance between maximum firepower and lessening the power of heals. Where the line goes… Depends on the base design over all and the skill of the attacker.

This is pretty much the rest of your buildings. Two common ways to place them are: as close as possible to your defences to prevent sniping or as far as possible to make deployment difficult. Both work.

I asked people to post some layouts but so far only Stitch did pull through. Thanks for that. Everyone are welcome to post their layouts for others to see. Which makes this almost a community project, now doesn’t it?

There are countless options how to do the layout. Yet they all work the same exact way against hogs. The big difference on the bases is mostly what else can they fend off. Some designs can take out bloons, some fare bit better against GoWiPe. One minor change can make a world of difference on the functionality. For example: placing mortars to the core will fend off witches. Placing teslas bit outside of the ring, in front of ADs can screw a full blooning.

Hopefully we get some good layouts on the replies so people can get a better idea what I’m talking about.

Here’s one fully functional from masters: – Unlurable CC without spending a lot of hogs to get them out
– Bloon coverage adequate
– xbows up , extra bloon cover.
– xbows down, hogsafe