The most agile and swift tanking class available, Knight’s strike their opponents quickly and leave them to die. Able to dodge and block attacks, their prowess is mainly based on agility and strength.
In this Tank Knight Build Guide, you’ll learn how to build an evasion Knight perfect for both PvP and tanking in dungeons.

Class Attributes
You should focus on boosting your stats in this order.

AGI
A Knight’s skills focus on agility, attack speed, and evasion. Boosting your agility benefits your buffs making you untouchable.

STR
Strength helps a Knight with physical attack damage, as well as block rate. This goes alongside with your shield giving you, yet, another defensive bonus.

HP
HP increases your survival, which allows you to tank dungeons, bosses, and mobs. 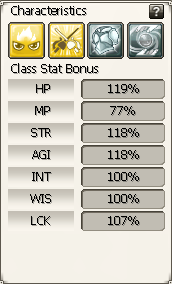 Class Certificates
Certificates for Knights are very negotiable, players can choose to use all of the evasion certificates from Bard, Illusionist, Knight, and Thief class. But this is the basic defense/agility setup for Knights.

Personally, I would prefer this over all of the evasion certificates, because you gain the 50% shield, 5% Max HP, and 2% agility bonus.

With a setup using all of the evasion certificates you’ll get only 125-150 evasion points. 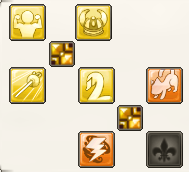 Positioning (Maelstrom) and Battlefield Cyclones (Judgement Storm) should be your first priority because they’re a Knight’s main offensive skills.

Battlefield Cyclones is a must because, Judgement is a Knight’s best DPS skill. In PVP, it’s your winning move, leveling it up increases it’s potency by 20% and +2 seconds.

For class talent, an evasion Knight should max Classy Finish because it improves your attack speed and movement speed +20%. This significantly improves your skills buff effect by 1/5 if you think about it.

Remaining Knowledge points should be assigned to Weight Training to increase evasion.

Gears and Equipment
Spirit Chain is currently the best armor for a Knight, it’s main attribute increases agility, luck, then followed by strength. As for weapons, equip a rapier at all times.

Upgrading a Knight is the biggest defining factor in a good or a bad Knight. I will warn you, it will cost a hefty price. Upgrade all of your armor, slot them with agility gems, and enchant them with slightness scrolls. Be sure to equip trophies that boost agility too. 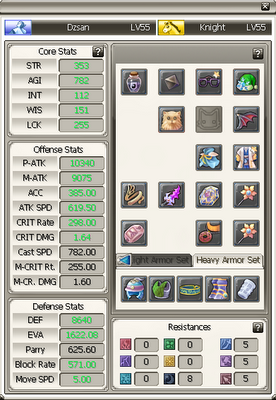