Hello everyone. After a huge break from Wakfu and daily amount of requests I’ve finally decided to make a Pandawa guide.
A little about myself, my name is Styliaqt and I play on Remington. Created my first pandawa in beta and everyone suddenly started telling me to be earth. I was bored as hell from earth .. Thats what got me into a position where I wanted to create something ‘rare’ and unused. Styliaqt was born on day #1 of wakfu live and ever since I haven’t rerolled or gotten bored of it, I’m simply in love with the class. Not going to bother you any more with my life story, lets get down to the guide! 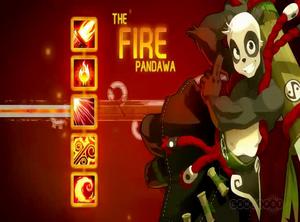 First of all, knowing and utilizing all of your abilities is most important for any pandawa build. Rejecting this fact only makes you a crippled class.

At the cost of 3ap this spell has amazing damage and an even better effect which benefits your total CH percentage. Flaming burp can hit up to two targets and has 1-2 range on its own. It can be a life saver in situations where you cant go close to the enemy and due to no MP cost it gives you the ability to out run the enemy. CH buff from Flaming Burp lasts for one turn which means it applies instantly and stays until the end of your next turn giving you potential 100% CH for your next combo.

This ability is very unique and has a partly low cost. Its a great AP dumper if you don’t need to move at the end of your combo or simply need to finish off the target without losing too much ap.
I personally don’t use this ability on a high level but it saved me many times regardless of its level. I evade using it due to a high mp cost which can cripple me heavily so I don’t like relying on this spell too often.

This is my most used and favorite ability of them all. At the first look it doesn’t seem that powerful but when you count in that this ability allows you to get a secure backstab to the enemy regardless of your position, this is where this ability dominates. PVP wise blindness effect can annoy nearly every opponent in game and it gives you a huge advantage. At Ultimate Bosses you might not always be able to use it but if you’re 1-2MP short from getting yourself into the formation, this spell can guarantee that. No los jump with 2 range at the cost of 1MP is far too good to miss. Also it hits 4 sides from your landing point and combined with Karchamrak and a bit of AI manipulation, this is quite an insane aoe ability.

Mainly used by ranged fire pandas and a high dizzy cost requirement to trigger explosion don’t satisfy me with this spell. Its great if you have nothing better to do and don’t want to risk exposing yourself to the enemy target(s) and just hold your distance.

Great trash cleaning ability with very good range and quite a wide aoe. Can be used to farm low level mobs if you require any speed farming, also it can do insane amounts of damage to a group of high level enemies. Only down side with this ability is the removal of Dizzy which cancels your Milky Instinct specialty and previous resistance modifications that you created so your group damage will fairly drop.

Milky Breath, Bubble Trouble and Milk Fountain are the final 3 abilities that I use from the water branch to add modifications and keep my dizzy rolling in case I wish to preserve my wakfu points.

As I’ve mentioned earlier, I use all abilities pandawas have in their arsenal which also means that ALL earth abilities are there to be utilized and used depending on the situation.

One of the main abilities which makes Pandawas gain the edge over other classes.
At a very low AP cost you can move an ally or an enemy up to 4 cell distance. This is very used at UBs and much abused in tactical PVP.
This spell also reduces resistances of both allies and enemies by 20% so using it wisely is very much needed. If you believe that spending 10ap on using this ability 5 times to reduce resistances of the target by 100% to increase your group damage is going to benefit more than you using those 10ap for damage, I don’t see why not doing so.
Also this ability can be used to protect any ally or enemy from damage. As long as you stand, the person you hold will stand as well. (There is a very few abilities which can go through this and are very easy to anticipate)

A very simple but yet insanely good ability. Serves you as a great escape/positioning mechanism, can keep your dizzy and merry up if you’re out of wakfu points or it can simply serve as a block which can be placed anywhere. And on those places where you can throw it, you can simply use Triple Whammy to get it into the position.

One of the most underused spell in Pandawas arsenal. This spell has a great cost which is why not many people bother using it. Without WP or AP cost this ability can change far too much on the battlefield. Gets rid of those annoying air sacriers and other classes which like to bounce you around. Sadly, wakfu cost of this spell doesn’t make it worth spending specialty points on.

This spell, is a must. Keeping an eye on your barrel and positioning it carefully is what makes this spell so good. Simply getting out of lock by spending 1 wakfu or positioning yourself for a better attack or even kiting the opponent is far too good to be ignored. It also gives you 10 merry per jump which means it can force your merry levels if the fight is near the end or you’re sure it will end quickly makes it one of your main merry level gainers. Also this can be used to gain x2-3 backstab hits from Dairy which can be quite painful.

Your second ability that boosts Merry and dizzies the enemies. Very low cost and only with one cast it has the potential to increase your damage by 30% in the first turn, as well as giving your allies the same boost. Down side of this is that it gives 20 merry which in some situations can be fatal for you and in those situations you either use barrel hop and keep dizzy with one of your water attacks.

Giving you final 20% damage increase and ability to put a damage over time debuff on dizzied targets makes this spell so good. Together with a backstab Dairy the damage boost of this spell is insane.

Raw 30% heal in 0->100 merry transition don’t look like a very good trade for me but in some situations this can be a huge advantage.

Additional quartz capacity and lock is good but not very needed for a fire build.

One of the most cool and annoying abilities when it comes to pvp. A bit less used and useful in PVE but overall I like this ability even tho I didn’t max it.

Not much to say about this .. 20% chance to fully evade an attack if the target is dizzy. This is just ace.

5. Build that I am playing:

This is pretty much how my spell experience is distributed even tho I’m currently built for a specific UB which means that only change you can make is lower your earth spell levels and make dairy a little bit higher. 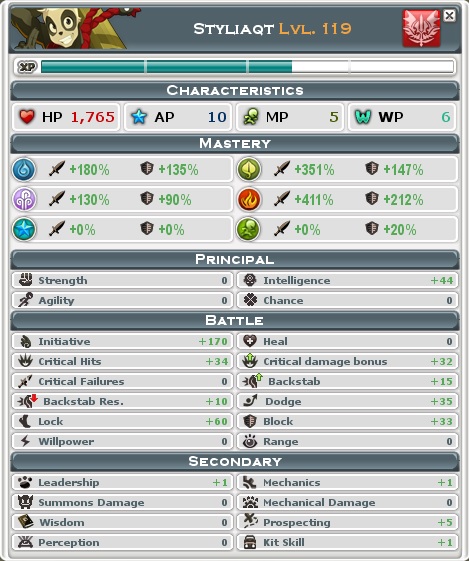 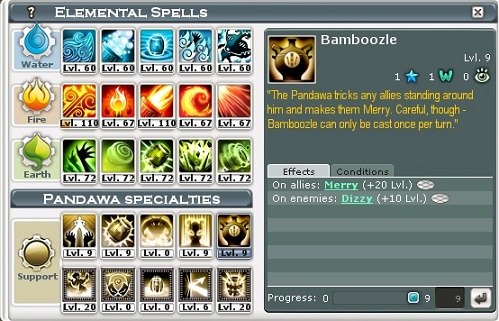 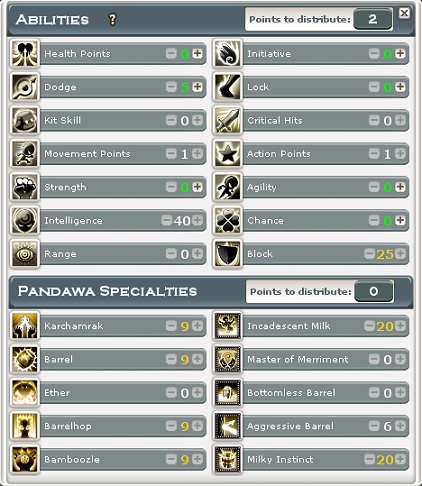 As it can see above I’m mainly going for 1ap, 1mp, 49(or 50) int and rest into crit. This is because in long fights I reach 100% crit from high dizzy targets by using flaming burp on them. Beside that, you can most likely get 2mp if you wish to feel more safe around UBs and using more kiting strategies. I myself have managed to do every single UB in game with these stats and never really had any issues with them. (Not counting DP)
I believe that pulling out the maximum out of your character will give you the edge over other classes and make you better and more needed as a player. Which is why I personally believe that I can achieve the most with this build as it suits me as a player, perfectly.

As your levels go higher, you will start to realize how much a panda can do. At around level 80 your panda will show its nearly full power and you will be able to use all of its awesome combos and abilities as you please.
As for itemization I would say to start off with dark hurl and hunt down moowolf set. Both of them give high crit chance and very nice fire damage. After you’ve achieved that, your next goal will be end game sets such as magmog.

I believe I’ve covered everything and would like to inform everyone that this guide is made on my own personal experience and because of the amount of requests and daily questions about panda information. I did play all 3 elements and know them all very well, I’ve just chosen fire as my main spec just because I find it most interesting to play and far from the strongest.

If there are any questions regarding the guide or pandas in general, please feel free to contact me.

PS: I would also like to thank everyone for giving me this chance to get to this point and help me gain all this knowledge about my class and game. Two excellent pandas who I always looked up to and still hope that we’ll reform our old panda trio are Lindel / Rising Sin and Western. Sadly Lindel is not with us any more but I’m eagerly waiting for your return bro o/

Thank you for the patience to read this ~