ill be explaining and describing in detail about each stat. 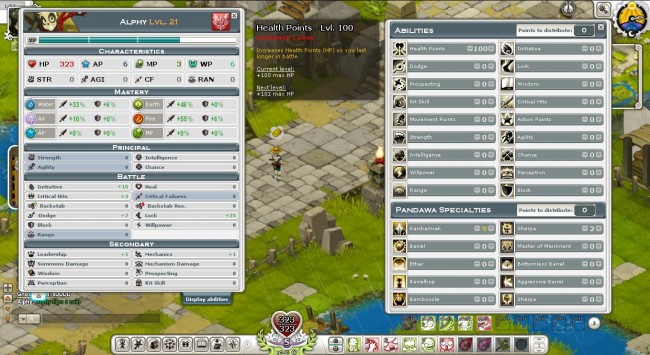 These are the stats available to spend points in:

then the Other/Equipment only stats:

Health points is one of the most important stats for every class, though it may be more important for some classes than others.

Each class has slight variation of Base HP around 48-60 ,Tanky classes usually recieve higher base HP and Distance Fighters usually receive less HP

HP is gained greatly through equipment and

initiative works with the order of the induvidual teams, meshed together depending on which member has the highest initiative

Team a ; Team b (initiative)
1. 120
2. 110
3. 90
4. 100
5. 80
6. 70
7. 69
8. 20
This means it does not really matter if your teams initaitive is all over the place or clumped together there will allways be a balanced order, additionally if one group is bigger than the other, it will mean that the members with the lowest initiative will be paired next to each other. Removing one unit from batle will usually result in clumping 2 members of one team together like this:

Speed Bonuses Vary depending on each Class/Monster in the Combat
Example of this would be Saddida adding +1 WP (Permenant (Cap at max WP)) gives the team (and the enemy team) the option to refund Wakfu points, Xelor will add the +3 AP speed bonus, allowing more things to happen in a single turn.

You can track the Speed Bonus meter at the Right side of a combat:

When this bar reaches the top it allows you to Choose a Speed bonus depending on How fast you are in the turns and what units are in combat. (negative speed bonuses always at the first option and you need to unlock the good ones)

Some units can force you to cycle through every speed bonus (both good and bad) before all become available again. this forces you to pick a speed bonus each 7 turns (this mechanic is very strange)

you can calculate from the dodge and lock in this screenshot, the Destiny eniripsa has -40 lock, i have 2 dodge.

the calculation starts at 50% dodge when there is equal dodge : lock 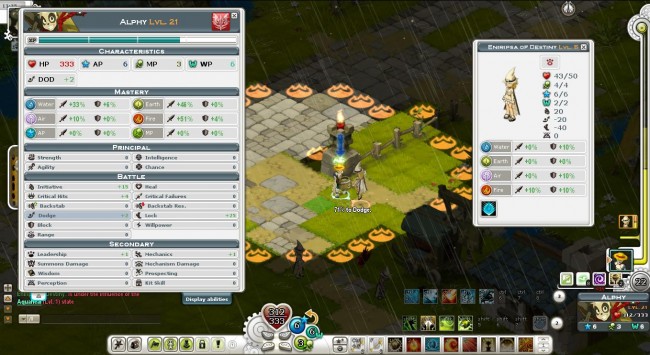 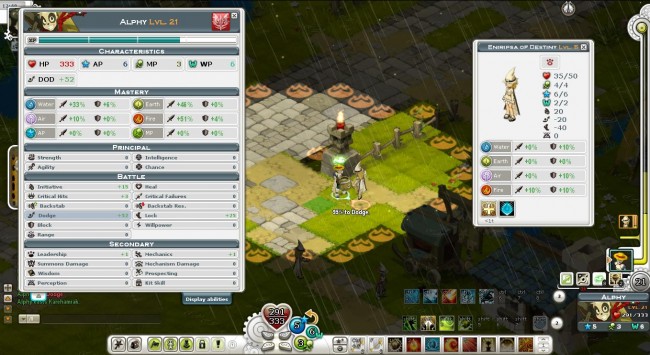 recap: the image shows that the dodge chance is 95%, this means if i try to move from a cell adjacent to the goball there will be a 5 % chance that i will get “Dodge Roll Failed” and end my turn and remain in the same spot.

the way the goball faces has an effect on the dodge / lock chance, if an opponent is facing its back to you, you have a lower chance to be locked.

the minimum lock/dodge value is -100, every class starts off with 0 dodge/lock, and can increase these stats through equipment or characteristic points. Classes such as Enutrof could consider dodge as a useful stat due to their lack of transportation spells when fighting a Mele heavy foe but classes like eniripsa may not need dodge because they can push a close range target with “Fear flask”

These stats can only be gained through equipment

to Enutrof Prospecting can be more than just drop rate. it can also increase their damge by 50% of their prospecting.

Kit skill reduces the level required to equip an item, if you have kit skill of level 3 and you are level 10 you can equip items that are meant for level 13, if you have enough kit skill it can prove useful early on but its effects will become less valuable later on when you reach the level you need to equip a certain item.

This stat will become quite useful if you can reset your points spent, though there are equipment that give kit skill this is quite counterproductive though considering your sacrificing one piece of equipment to gain on another

you can purchase 2 points of AP from your skill tree, the first point will cost 150 and the second will cost 250. there are many equipment sets that have a +1 AP bonus for the complete set and there are some equipment that grant +1 AP alone (usually Necklaces)

Movement points are How far you can move your unit, Base MP is 3 for all classes, it can be changed through Equipment (Usually boots), Movement points can be the most important stat for some classes (Namely Enutrof (they seem to be mentioned often)) if you have more MP than your opponent you can “Kite” them if they are Mele, or you can force them to use abilities that get them Closer to you giving you the advantage.

The best stat to counter MP is Lock, so it is Useful to have high dodge stat with High MP. In rare cases its good to spend points in MP. most classes do not need an extra MP

These Stats give 0.5 % Resistance and Damage in their Element Per 1 level,

Willpower is a Stat that increases the % chance to cause and resist states such as : Burning,Bound,Blind ect

it gives both AP and MP reduction and removal

with Each successful AP removal the target gains +10% AP loss resistance, This Stacks each time with no (visible) maximum, each turn that passes when the target does not lose AP the stack reduces by 1 this is called “Hyperaction” (also the same for hypermovment)

this is a quirky stat because it can be useful in some classes if you can get it higher level while keeping high base HP, this stat can be popular with Croud Control (Defensive support) classes and it makes it possible to reach near 100% Croud Control Chance.

This stat is very specific to one class, The Sram (mainly air). What this stat does is effect how likely it is to Detect/How unlikely the enemy is to detect you, Its calculations are similar to Dodge/Lock system. if your perception is 0 it does not mean you cannot detect. however if the srams perception is 0 it means that you will leave stealth

Vision works in a Cone of where the character is Facing (similar to the backstab), so if they are facing directly at you they have a high chance to detect you, each time you move/ opponent moves closer you roll a dice with a % chance based on your perception to see if you are detected, if you are at the side of your opponent there is a smaller chance to be detected (similar to lock system) but if you are behind your opponent you cannot be detected The Srams stealth has no time limit and can be a powerful ability if used correctly

Range is a stat that increases the range on Certain spells,

The spells should have this symbol

this means that the spell can increase its maximum range by an amount equal to your range bonus.

This stat is very useful to classes that have small range but modifiable range. but if a class like Iop or Sram has bonus range they don’t gain much bonus.

though its competing with plain HP in the points budget.

Elemental damage % increases the damage you deal with a certain type of element.

The calculation of elemental damage you deal is as follows:

There are also hidden values that will mean all classes will have a different base backstab damage.

Resist works the same as damage %,

there is a misconception that 100% fire resist means you get 0 damage from fire, this is not true,

The resistance calculation is as follows:

if you have more resist than your opponent has damage:

when an enemy attacks you from the side you lose 10% resistance all elements, when they attack from behind you lose 20% resist all elements

Final resistance % is Reduced total damage % you take from an attack,

Eniripsa has 50% water damage and 20% heal%, This means when the eniripsa uses a water heal spell base heal of 10 the target is healed 17 points.

furthermore if the Eniripsa used Counter nature (reverses effects of heals) and cast heal spell base 10 water the target would take 17 damage.

heal% does not effect Fixed % based heals.

WP is like AP but it does not reset after you end your turn.

Though Sadida can regenerate WP with their speed bonus option allowing them and their enemy sustainability in long fights.
and Eniripsa can also return WP with a mark, this is useful against enemies that summon when there is a team member that heavily relies on WP to fight (Xelor)

there are Two types of summons in Wakfu

One is Leadership summons, These are usually that have 1 or more MP and are living things such as Osamodas summons, Saddida Seeds and Eniripsa Coney.

The other is Mechanisms, These are Units that usually have 0 MP can sometimes not be targetable, and usually hold some special type of value such as Cra Beacons, Sram traps, Feca Glyphs.

There is another type of Summon that does not cost Mechanisms or Leadership, These Other summons have either no limit (maybe wakfu cost) to how many you can control or a Fixed limit. Examples are, Xelor Dial, Sram Double, Enutrof Dhreller and Enutrof Mine.

These Stats increase your Summon / Mechanism damage the same way it affects your spells.

the “Other” summons are affected in a strange way, Sinistro Gain damage from Mechanism damage % and Dhreller gain damage from Summon damage% ( its up to your judgment whether its mechanism or summon). it is not elemental damage so it works like general dmg%

Inventory is the amount of Slots your bag can carry

You Get 3 (no more) Additional Bags to add to your base bag slots, these are equipment that do not give any stats but allow carrying more items.

Backstab damage increases the amount of damage you deal from Behind the target.

Everyone has a Base Backstab damage bonus of 20%, this only applies when your directly behind your target, its sometimes a good strategy to get behind your opponent before attacking , can sometimes be worth the risk of lock.