Build Walkthrough Index
Use Ctrl + F to skip to the section you want to view.

I’m sure most of you have seen it at some point. The infamous air/fire Xelor hybrid. The build that blasts enemies for a cacophony of damage like no other, drawing enough damage to make a young child cry. It’s a fairly common build, however this is my personal iteration of the build.

“What can I expect?”: Build Purpose [WCE] 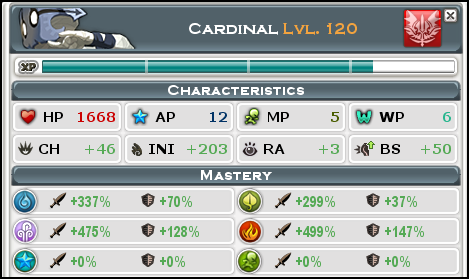 The goal of the build is intelligent placement and strategy. It uses Desynchronization to control when you can use AoE fire skills and uses air skills to bypass certain effects or set yourself up for powerful AoE damage. These are the bare minimum requirements at endgame to be a fairly decent damage Xelor:

This build will work primarily in PvM. That is the most important thing to recognize. It excels in two elements of damage by utilizing Hand for fire, Xelor’s Punishment for air and AoE, Temporal Burn for controlled AP usage, and finally Underhand for map control and single-target air DPT.
Preparing your Bundle of Joy: Stating Guide [BOJ]

In the beginning your goal should be reaching 10 AP pre-Devotion as soon as possible. This way after you place your dial you can still double Hand or double Punishment.

You can also get a couple of extra free stat points from the Vampyro Dungeon achievement (killing him first and killing him last) and completing the Five Finger Diss Count quest by facing off against Count Harebourg.

Notice: I’m only dissecting the fire and air spells of the elemental branches. This build does not focus on water skills except for Temporal Control to faster build up Temporal Crystallization.

Spell Name: Hand
Cost: 5 AP
Cardinal’s Commentary: Your fire element bread. High damage single-target attack. Rebounds up to once on Tock turns and only up to two cells away (line of sight required to bounce) however does not lose damage when bouncing. Limited to two casts per turn.
Cardinal’s Rating: ★★★★/★★★★★

Spell Name: Line of Fire
Cost: 4 AP
Cardinal’s Commentary: Good secondary fire spell to have if you’re running an average 10 AP set-up. Can cast it twice on the first turn even after casting dial (without using Devotion). The one minimum range is very handy to hit targets next to you. Also does not need line of sight, which is extremely useful in team play.
Cardinal’s Rating: ★★★/★★★★★

Spell Name: Temporal Burn
Cost: 1-3 AP
Cardinal’s Commentary: Uses remaining AP. Can only consume 3 AP at max, but has no cast limit. Decent overall. Hits in a circle of one area of effect on Tock. Second highest DPT skill in the fire tree after Hand. Always good to have a low AP cost attack handy to finish off enemies.
Cardinal’s Rating: ★★★/★★★★★

Spell Name: Hydrand
Cost: 4 AP
Cardinal’s Commentary: Weak spell that pays off only if the enemy stays in its AoE. Great tool for blocking pathing and doesn’t break off the dial.
Cardinal’s Rating: ★★/★★★★★

Spell Name: Underhand
Cost: 4 AP
Cardinal’s Commentary: This spell pushes the amount of times you use it on a target. On enemies, it pushes them away from the Xelor. On allies, it pushes them towards the Xelor. The effect occurs at the beginning of the Xelor’s next turn. It works hand-in-hand with Temporal Distortion to move around enemies and allies for some key map manipulation game play at the cost of 1 WP. Also works well to get away from enemies if you’re stabilized and cannot use Tempus Fugit. You can use Aging to trigger the effects of the push immediately instead of waiting for your next turn. Fairly strong DPT skill as well.
Cardinal’s Rating: ★★★/★★★★★

Spell Name: Temporal Distortion
Cost: 2 AP
Cardinal’s Commentary: Does not harm allies, which is great to use in conjunction with Underhand to transport enemies or allies long distances for 6 AP and 1 WP. Applies the Distortion poison state which causes damage to the target at the beginning of the Xelor’s next turn. Fantastic for burst damage when you know you want to deal a lot of damage the following turn.
Cardinal’s Rating: ★★/★★★★★

Spell Name: Tempus Fugit
Cost: 3 AP 1 MP
Cardinal’s Commentary: Always damages before the teleport. The new utility allows you to create a portal where you cast the spell and where you land, and if any ally steps on one of these cells they’ll be teleported to the other. Utility movement skill.
Cardinal’s Rating: ★★/★★★★★

Spell Name: Xelor’s Punishment
Cost: 5 AP
Cardinal’s Commentary: Your air element butter. Does very high damage in an area-of-effect. You can now target outside of the dial with the spell, however doing so destroys the hour cell you are currently standing on (nullifying the extra damage bonus from the dial). The range is fairly low, so be mindful of where you want to move before you cast it. Limited to two casts per turn.
Cardinal’s Rating: ★★★★/★★★★★

Specialty Name: Xelor’s Dial
Cost: 2 AP 1 WP
Cardinal’s Commentary: It was nerfed a bit by forcing us to cast it at a range (no more free teleport to escape the lock zone). However it’s what gives us extra damage. It’s what gives us high mobility, and easy Xelor’s Punishment targeting. The reduced WP cost was appreciated too. Your dial is your best friend. Learn how to place it to not lose hours. Learn to love thy dial.
Cardinal’s Rating: ★★★★/★★★★★

Specialty Name: Timekeeper
Cost: 1 AP
Cardinal’s Commentary: This is the build-up skill that allows you to do your more complex and heavy-hitting combos. You need this at a 1 AP cost. To boot, using it on your dial has a 50% chance to add another charge to your dial. More charges, more ass kicking per WP. More bang for your buck. You won’t always find yourself with spare AP. Think of Timekeeper as investing for future turns.
Cardinal’s Rating: ★★★★/★★★★★

Specialty Name: Mummification
Cost: 2 AP
Cardinal’s Commentary: This spell now acts like Eniraser. You can bring an ally back from being knocked down with a percentage of your personal HP. Every turn, they’ll lose 33% of their HP and after the third, they will no longer lose HP. The raised player will not die from this and be left with at least 1 HP. It still puts players in the In Recovery state. This spell does not require line of sight and has decent range. If you die though, all mummified allies also die. Limited to one cast per turn.
Cardinal’s Rating: ★★★/★★★★★

Specialty Name: Devotion
Cost: 1 MP
Cardinal’s Commentary: The lost of the WP cost means you can more consistently give your allies AP throughout the battle. However seeing as it’ll cost 4 MP each turn to make use of to its max potential, this spell almost forces you to run 5 MP to at least move once before buffing everyone’s AP. In group PvP or PvM you’ll be running 6 MP. This spell is range modifiable.
Cardinal’s Rating: ★★★★/★★★★★

Spell Name: Desynchronization
Cost: 1 WP
Cardinal’s Commentary: At max there’s no negative repercussions other than the -3 AP debuff if you use it more than one turn in a row. With this spell, the average turn cycles should become Tick, Tock, Tock.
Cardinal’s Rating: ★★★★/★★★★★

Passive Name: Temporal Waves
Cardinal’s Commentary: Since this build no longer relies on initiative burning and the Tick and Tock states are activated by default, you no longer need this specialty.
Cardinal’s Rating: pointless/★★★★★

Passive Name: Time Theft
Cardinal’s Commentary: Extra chance to take and give AP. About as useful as useful as a mountain of dung to someone who doesn’t own a Moofly. Please disregard.
Cardinal’s Rating: lame/★★★★★

Passive Name: Temporal Armor
Cardinal’s Commentary: This is beautiful. Extra damage every turn as long as you hit in multiple elements, up to +100%. You gain 15 stacks of this for each element you hit in a turn. Meaning one water spell, one air spell, and one fire spell can yield you 45 stacks of Temporal Crystallization. This effect will go away if you can’t cast something on your turn.
Cardinal’s Rating: awesome/★★★★★

Passive Name: Rollback
Cardinal’s Commentary: Each AP you spend now has a chance to return to you on the following turn, for a max of 3 AP return every turn after the first.
Cardinal’s Rating: cool/★★★★★

The Arsenal: Your Spell Levels [YSL] 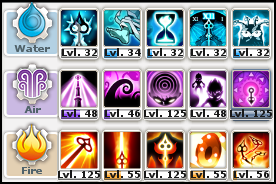 Things to note:
– This is just a guideline. You can substitute items here and there. Any general damage item will work for equipment slots. For example, you can substitute Mecha-Helmet with Kraken Helmet. Less health and slightly less damage (and one less spell level) but gain critical hits and a range.
– Spell levels is extremely important with this build, since you’re trying to squeeze out as much elemental damage and base damage with spell from two branches.
– Meka set and White Crow set are equals in two difference senses. Meka set will provide you with more damage and high resists, however White Crow will offer you backstab damage and more health.
– Mecha-Cloak gives the AP that a set bonus should have. You can hypothetically equip that and go best-in-slot. The purpose of wearing a full Meka or full White Crow set lies in the spell levels however.
– Later on I’ll do a budget equipment guide. But not right now.
Teleporter for Dummies: How to Play [HTP]

It’s not quiet the old standard, but it’s air/fire. A lot of enemies will often only be weak to one sole element nowadays, and so it’s sometimes just better to pick and choose instead of blasting with multiple elements. Don’t get me wrong, for the amount of AP you invest into casting Aging, you get a huge amount of damage out of it.

For me, though, someone who likes to PvM more than PvP, there are greener pastures out there. Xelor’s Punishment will always be a near-and-dear spell to me, and Underhand is one of my new favorite skills. There’s only enough spell XP to efficiently invest in two per branch when hybridizing, and so I decided to take Underhand over Aging.

The new utilities and effects of air and fire spells essentially make it so you’re now playing with twice as many spells as you were before. You have options, and there are a lot of things that you can do on your turn in almost any scenario. Tactically moving allies and enemies is now vital to your game play. You have a support role, but you can also deal epic damage if need be.