Disclaimer: This guide assumes you have basic understanding about Natures, EVs, IVs and assumes you know how to acquire exact or small IV ranges. If you did not understand the previous sentence I would recommend reading up on those stated things, before attempting to understand this.

EV spreads, they seem so simple. Just dump 252 EVs in your attacking stat and speed stat on your sweeper or dump max HP and defense on a wall. Or just use the smogon guides even though, here on PokeMMO we have a completely different metagame, not to mention no easy acces to maximum base Hidden Power nor perfect IVs on the ‘right’ natured Pokémon. Making your own spreads is a smart thing to do, it’s taking it one step higher. It can give you the advantage in some situations but be warned, failure is inevitable when trying out new things. I will try to guide you through the proces and will give you some examples to think of.

‘So… How should I start making a spread?’

Step 1: Try to get the exact IV ranges of your Pokémon, or just try to get a small IV range like 23-25. If you don’t have the exact ranges, use the lowest ones.
Step 2: Deciede your moveset and what you want to accomplish with this Pokémon.

Allright I don’t know how most people do it from here but I do it this way.

Step 3: Go to the Smogon Damage Calculator and make a spread for your desired goal, if this goal proves to be unrealistic set a more realistic goal. I will use Forretress as my example.

IVs and Nature: Let’s say it’s Impish with the defensive IVs 20/27/25
Moveset: Spike Support set, alternatively Suicide Lead
Goal: I want to set up as much spikes as possible and want to survive a Fire Blast from an Adamant max SpA IV Machamp. 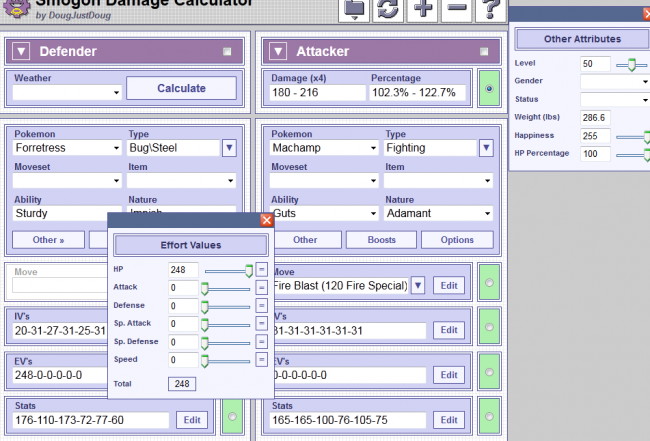 No, actually you shouldn’t have just made the final spread because your SpD investment may need a small adjustment. Why that is? Smogon uses a later gen damage formula, luckily it isn’t THAT different but what may look like a 1HP survive in this calc, may be a chance on a OHKO in the gen3 damage calculation. So this is what you are going to use. This calc is amazingly easy to use, just use the stats that you see in the Smogon calc and make sure you use the right move and don’t forget the STAB in some cases.

Step 4: Recalculate the damage done with the right formula now that you know the stats of your Pokémon on level 50 including the EV investment. 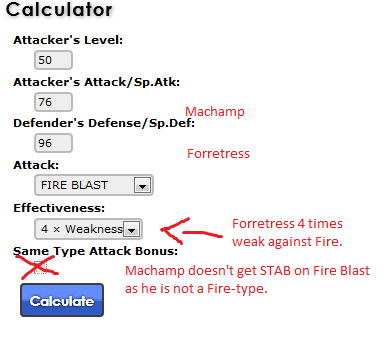 Great the max damage it can put out is 175, and your Forretress’ HP with 248 EV investment is 176! That means you just survive it (with a max damage roll), even with the gen 3 formula!

Offensive and unusual EVing, the thought process:
Now, that wasn’t that hard, was it? I will give you guys one more example of an unusual spread. It will involve a Starmie. Let’s see what the hell smogon has to say about Starmies:

Allright, so Timid is the only right nature right? RIGHT? Let’s imagine this scenario: I am fishing for a +Spe Starmie with 31IVs in Speed and suckish SpA because I don’t care about that (lel max speed ftw). I find a Modest one, no + Speed, it’s probably useless. But for some reason (thank you Automatic IV Calculator) I deciede to check the IVs anyway, max SpA with almost all IVs around the ’30’ mark. You know what? I can use this. So I get the exact IV ranges and they are:
25/x22/31/29/29, wow awesome but yeah Modest. You know, there are so much Timid Starmies around, maybe.. I can counter them with this Starmie? Let’s look up Starmies base HP and SpD: 60 and 85 respectively, that’s not bad at all.

A max SpA Timid Starmie can’t even OHKO me with a Tbolt the damage is: 80.3% – 95.5% (Smogon). I know that the gen3 formula isn’t that different and that it won’t OHKO my Starmie with that formula either. Allright, what do I need to OHKO it?
Let’s see what I get if I put max SpA on it, my Modest Starmie does: 83.8% – 100% to the Timid one with a Tbolt, great so.. I can’t surely OHKO it so my plan is useless.
‘Is it?’
No wait, we have boosting items! I can use a Magnet to boost the damage with 10%. Now let’s use the gen3 calculator to calculate the damage on the Timid Starmie (assuming 31IVs on SpD and HP). 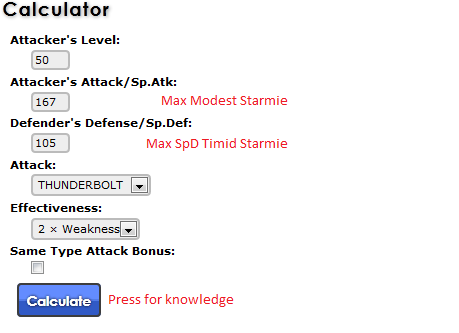 But wait a second here… What if, I give my Modest Starmie a Salac Berry instead of a Magnet, LET the Timid Starmie hit me so I can 2HKO it with a Tbolt after the speed boost? Because I will surely go below 25% of my HP uninvested in SpD and HP. Is that possible? Let’s see what my Modest Starmie’s speed is uninvested: 134, great now to calculate what a Speed Boost will give me:
134 * 1,5 = 201.
That is.. Absolutely fantastic, not only will I be able to kill the Timid Starmie back with this I will also be able to kill all the base 130 speed Pokémon except Jolteon and speed tie with some Electrodes.

What now? Hmm, so I guess we are settled on 252SpA to hit everything very hard. But let’s say I want this to be a Timid Starmie hard counter. To get Salac Berry to activate I need my Starmie on <25% health. So actually I can give my Starmie just the right amount of HP so that the minimum damage roll on a Timid Starmie Tbolt will be 75% of my health. This is risky though because not all Timid Starmies are 31 Speed and SpA so we will assume 20IV SpA on the Timid Starmie this time. 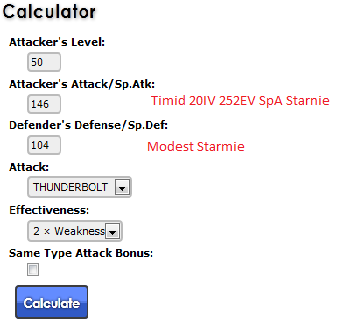 Now I return to the Smogon Calc to see how much EVs I need to invest into HP to get 137. it’s 36HP EVs. So can you keep up? Look what we did:
– My Modest Starmie can beat a 20SpA+ Timid Starmie with the EVs 36HP/252SpA and a Salac Berry.

That’s it that’s all I need, what should I do with the rest of the EVs I have left? My Modest Starmie hits 134 speed uninvested, now I am going to use this to see if there is anything important that I should outspeed. Hmm 137 speed has max speed +Atk Hera and Nidoking. Hera is not a big thread in 50’s but Nidokings Megahorn will OHKO if I don’t invest a lot in defense (about 200def EVs). But even if I have 200def EVs, a HP Bug 70 Heracross would still have a fair chance of OHKO’ing me, so it’s probably just safer to go for 138 speed, or even better 140 (with Salac outspeeds everything (tie with max Speed Electrode and outspeeding max Speed Smeargle just in case). I need 44 speed EVs for that.

So we covered , SpA and Speed. We can’t invest more in HP/SpD or we don’t get the sure Salac Boost from a Timid Starmie Tbolt so the only thing left is Defense, not bad at all with the weaknesses to Bug and Ghost. So I dump the remaining EVs in Defense and we have our final spread: 36HP/176Def/252SpA/44Spe, what we accomplished?

BUT, this is a very specific Starmie, it will do very good in some circumstances and it will be absolutely terrible in some situations. The most important thing about this is: KNOW when and how to use specific EVd and natured Pokémon. If you just make something up because it survives some things but don’t know how to properly use it in battle you won’t have any benefit from it.

NOTE: I don’t own this Modest Starmie I made all the IV’s up.

Le tips and le warnings:
Tip: It’s usually easier to make a spread for walls than for bulky attackers. Especially mixed attackers are hard to EV correctly.
Tip: You don’t always have to go max speed investment on Sweepers. Crobat is an excellent example for this because it has no benefit in speed tieing with Aerodactyl and Jolteon.
Tip: Sacrificing some attacking power to survive a certain hit is not a bad idea, as long as you don’t have to sacrificeto much for it.
Warning: Dont overdo it. You don’t need a ‘special’ spread for every Pokémon you EV. This is not a good thing or you must have extremely good knowledge of the metagame and you really have to know what you are doing.
Warning: Specific spreads meant to counter specific things tend to date quickly. This is because the meta is everchanging, don’t forget that. Like how I EVd the Starmie above, if you don’t use it correctly you won’t get ANY benefit from it. I know I said it before but I can’t stress this enough.
Warning: Some ideas will fail, some will prevail.