A long, long time ago (about 5,000 years before Dragonfable), there existed weapons known as Energy Blades. People all over used these energy blades in hand-to-hand combat, outside of Mecha battles. As a G.E.A.R.S student destined to destroy save the world, you must also master the ways of the Energy Blade.

Of course, you cannot do that without first knowing what an Energy Blade is.

To simplify what the Energy Battling System is, it is a watered down Final Fantasy battle, without the special skills. However, to help with the understanding, here are some nice pictures:

The Red Bar represents the total Health your character or opponent has, or, for short, HP. Once either you or the enemy depletes their HP, the battle is over. All energy fight participants have varying amounts of HP.

The Blue Bar represents the total Energy your character has, or, for shot, EP. This energy allows for the use of “Strong Attack” and “Defend,” explained later. The total amount of EP is unknown, as deductions from the EP bar cannot be seen. However, for the purposes of this guide, the EP total will be labeled as 100.

Your HP and EP levels are reset after each battle. 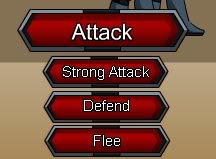 Now here are the actual interface options. The largest button, labeled Attack, is the standard attack button. It deals 100% of your weapon’s damage, with no bonuses. This attack also does not cost any Energy.

The second option, Strong Attack, is probably the most used button in all of energy fighting. It deals more damage than with using the Attack button, although the exact amount is unknown. It costs 1/5 of your total EP to use, or 20 EP.

The third option is Defend. This option deals about 60-70% damage of a normal attack, but increases your defense substantially for one round, meaning the enemy will miss more. This attack costs 20 EP to use. However, this defensive tactic can be penetrated by an enemy’s Strong Attack.

The fourth and final option is Flee. This button ends the battle in your enemy’s favor, just like the Eject button in mecha battles. This is useful if you accidentally started a fight, or other cases such as skipping the energy fight in Westion.

However, when you wear a Ninja Outfit, another option appears.

This is known as Magic attack. When used, it consumes some energy. In compensation, it lets you attack for two powerful hits. But, notice how it doesn’t look like this:

That is because, only when the Magic button is lit, is when you can use the attack. It will only be lit when you are wearing the Ninja outfit, while also having the Yokai Blade equipped. Next up are the actual mechanics of the energy fight system. Here is a brief list of some energy fight statistics:

Energy Blades: Energy blades determine the damage of an attack.

Damage: Damage is determined by the Energy Blade that you are wielding. 100% damage is the damage stated on the weapon.

Miss: Missing is when you or the opponent completely misses the opponent. No damage is taken at all, but EP costs still remain the same. Missing is increased when Defend is used.

Critical: A critical hit is when an attack deals double the normal damage. This is identical to mecha battle critical hits. Critical hits cannot stack (i.e. hitting quadruple damage with 2 critical hits at the same time)

Stats: It is currently unknown whether or not player stats used in mecha battles also affect energy fights.

At rank 35, you are also given access to the “Nova Blades” Shop. This contains the Phantasm Scimitar, the first buyable and permanent energy blade.

A higher color in this class will also increase the difficulty of enemies in energy fights. Higher colors also give access to certain items found in Light’s Sabers, explained later.

The weapon rack can also be found at the Museum. All weapon rack items are temporary, and are unequipped when putting on a uniform or logging out.

After all your hard-earned work at Energy Blades 101, surely there must be some permanent energy blades for you to carry around other than the NG-Only Phantasm Scimitar! Well, this is it! Light’s Sabers holds every buyable energy weapon in-game, save for the Phantasm Scimitar.

The shops in Light’s Sabers are open to only those of the correct belt or higher. All blades are level 1, except for the Nova Blades.

The blades that are recommended for purchase are either of the NG blades (Preferably Soul Sapper), and all blades at Blue Belt and up. The Orange and White blades are not much use, as the temporary blades from Energy Blade 101 are enough.

There are some other energy blades available in the game. Here is a list of them:

Planet Necryptos:
Wraith’s Claw (NG) – This Nova Gem Blade has the highest stable Damage Range
Staff of Raw (NG) – This Energy Blade has the highest damage potential, but also has a wild damage range.
Ultraviolet – This weapon is equal to that of the SC-Only Broken Blade, and is available to all players.
Solar Spike – A Powerful Non-Rare SC Energy Blade

Yokai Blade – A Blade that is available to all. When you are wearing a Ninja Outfit, you are enabled to do an Powerful magic attack. (Pedia Link needed!)

Uniforms are very minor arts of Energy Fighting, having little-to-no effect, other than 1 important one. However, they are here, as some of them DO have special effects.

The following Uniforms do not have any affect on Energy Fighting:

The following uniforms, however, DO have effects:

Zargon Supersuit: This uniform appears to have a slight buff to damage during Energy Fights. Also, the attack animation is changed to that of a lightning bolt.

Wolf Costume: This uniform doesn’t really have an affect, but during the Police Quest in which you dress up as a Wolf, you obtain the temporary Boom Microphone weapon.

Scrubs: This uniform doesn’t do anything but give you a temporary Syringe. The Syringe disappears after completing any quest with an Energy fight in it.

As with all fighting, there are strategies for Energy Fights. Here are some trite, but effective strategies:

Defend Spamming – This strategy is simple. Just mash away at the Defend button. This is important at high levels, when enemies can potentially crush nearly half of your HP in one blow. This will not be good if you are having a particularly bad luck streak.

Strong Attack Spamming – As with above, just mash away, except this time at Strong Attack. This is the most common strategy, and very effective. Basically, you kill the enemy before they kill you…hopefully.

Strong Attack – Defend Shifting – This one is a bit different. You alternate between Strong Attack and Defend. The deals more damage than just normal attack, yet still provides defense every other turn. This is not as offensive as Strong Attack Spamming, or defensive as Defend Spamming, but is a nice balance.

There are many more strategies. These are only the basic, common ones. Discover your own sure-fire strategy!

This is a list of non-rare energy fights in MechQuest, along with the enemies.

<Area/Quest Name> – Enemies: <Types of enemies> – Amount: <Number of total fights; + means there can be more>

Energy Fights are an ever growing part of MechQuest. If you haven’t started yet, start now! You’re going to miss out if you don’t!