Let me preface this by saying that as with all MOBAs, this is a team game, and you might have a rough laning phase due to your tactician/predator support not knowing what to do. But the later the game gets, the easier it should be for you to rally your team together and have them take all of the damage while you burst the enemy team 100-0 in five seconds. There’s still a lot I don’t know about the game, feedback and (constructive) criticism is welcomed. Putting into words how I play and how I think about stuff was harder than I thought it would be, sorry in advance if something doesn’t make sense.

tl;dr after the “General Tips” section


I’ve also played Nissa as a solo lane 1v2, and this guide will work the same way for that, but you just need to play extra safe and ward safely instead of aggressively.

These apply to any game, whether its Dawngate or Ping Pong

tl;dr Say nice things to your team or don’t say anything at all, it’s a team game. Solo laning isn’t the end of the world.

Qualifications : Confirmed on stream that I am the #1 Nissa.

Keep in mind that my play style is to farm and disrupt enemy spirit wells until it’s time for team fights. This isn’t to say that I won’t go for kills, I’ll harass the enemy lane all the time with the bounces from my Q and auto attacks. Warding every time it’s off cooldown is very important as well. I also like to disrupt the enemy’s jungle by taking his buffs. Every 3ish minutes I “should” be going to disrupt the enemy spirit well but it doesn’t always work out that way.

I’ve found that the +12 Power loadout is the only useful one for Nissa. The extra power really helps her early game farming and harass with the extra damage more than the extra defense penetration.

Wither is good for both chasing and strategic retreats (running away).

Exceed gives you +25% of your total power as bonus power, and when you have ~300 power (or more) that is a lot of extra damage you’re going to put out. 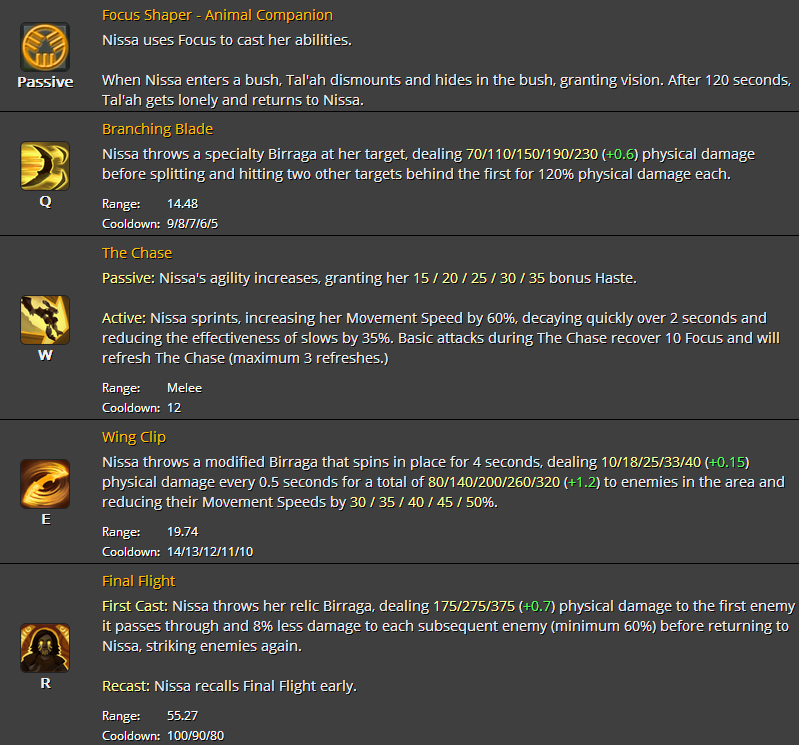 Sometimes you’ll have to decide between the haste bonus increase on your W and the slow % increase on your E… If you want an easy way of trying to decide which one to get, then think about this: “Am I having problems running away / are they faster than me with my W on?” If so then getting an extra point into E won’t hurt you.

Passive – Nissa is not a “Pure Shaper,” which means she does have a resource system [200/200, regens decently fast) and doesn’t rely on only cooldowns. But the resource system gets easily regenerated by activating her W, “The Chase.” This little furry creature follows you through bushes and grants a small amount of vision for your team for two minutes. So if you walk through a bush, he will follow you until the point you exit the bush, but if you walk to another bush he will run to where you are. This means if you see a small little creature with the little red vision icon above him running, that’s where Nissa will be.

[Q] Branching Blade – The easiest way to describe this is that those who have played League of Legends, this uses the same system as Miss Fortune’s Q, in that it uses a half circle behind the target [in the angle that you are to the target]. It will hit the first two enemies (whether they are minions or Shapers) behind that target. You’ll use this for farming and for harassing your enemy lane. It does 120% damage to the second two targets, which means you’ll do way more damage to the people it bounces to.

[W] The Chase – Passive haste?? OP son. While the movement speed doesn’t increase past leveling it once, I find that the haste bonus makes it worthy of maxing it second. In the laning phase being able to dish out more damage and do it faster than your opponent without having to build haste items is insane. Also it reduces enemy slows by 35% (a lot for being a Glad), and you’ll recover 10 focus each basic attack (which includes your Q). This skill is really important for harassing enemy spirit wells (something Nissa excells at). You push the lane, rush to their spirit well, Q the first wall of workers, and keep attacking until you see that the lane is missing. You quickly throw your E behind you and activate your W to run away. [It also helps to have an aggressive ward in their bush that leads to the spirit well from lane]

[E] Wing Clip – While yes the slow is useful, it’s not useful enough in lane to max it second over the haste benefit of your W. Though later game this is an exceptionally useful skill due to the 50% movement speed slow. The damage isn’t that great early game but it can snowball later game if the enemy team clumps up. This also can help do a little damage to the spirit well workers if you have your lane mate with you. Doesn’t hurt to throw it on Parasite either if you have the enemy’s jungle warded enough.

[R] Final Flight – Jesus.. Christ.. This is an insane amount of burst at ANY stage of the game. If you’re going to use your ult make sure that they’re running the way you want them to run so you can lead it, that they are in a narrow part of the jungle where you can’t miss, or they cant see you to dodge it.

This is not a set formula and it shouldn’t be treated like one. There are times when an item should be rushed or upgraded before another one, it’s up to your judgement to make the calls.

1. You can either start out with Power +2 HP Pots[+12 Power, builds into Rage/Destruction] or Hunger +1 HP Pot[Restores health on hit, damage x2 vs Shapers, builds into Voracity]. I personally recommend starting out with Hunger as you will be able to stay in lane longer, while still doing enough damage to keep the enemy Shapers from zoning you out of farm (if you and your lane mate play it right you can zone them).

2. From here you either have the option of upgrading Hunger into Consumption [this is what I do] (we don’t want Voracity yet) or Power to Aggression, depending which one you picked. After you upgrade your starting item, you want to rush to get Strife (Power->Might). This is honestly one of the most broken items in the game right now (besides Glory). You get +50 Power and +300 HP, with the passive of getting: PERMANENT +4HP and +.5 Power per minion, creature, or worker kill, decreasing by 1% after each kill. [Pluto told me that they were going to nerf it though]

3. Start building towards a Destruction/Rage. (The Destruction vs Rage debate, Rage will do more vs tanks, allowing you to melt them way easier, and you’ll do enough damage to melt the squishies too. In my opinion Destruction should only be built when your team (and you) are far ahead of theirs in both vim and damage, because +40 power isn’t worth 1,000 vim that early in the game unless you’re crushing them.

4. After you’ve gotten your damage up, now is the time to get the lifesteal, so pick up a Voracity when you can.

5. This is where it starts getting situational, as those first three items are the “core” of Nissa imo. At this point I would go for a Ruin (+30 Power +35 Haste +10% Lifesteal, Dealing damage reduces AR and MR by 5% for 4s, stacks 4 times; basic attacks [includes your Q] deal 4% of targets max hp as bonus physical damage) which builds out of Time->Abolition. If you’re having problems with super fast champions catching up to you and pooping on your face, then you could consider a Pursuit (+50 Power +30 Haste, dealing damage gives you a 14% MS increase that decays over 2s; Frost 1, dealing damage slows target) but I would recommend just toughing it out until later game.

6. Again, if you are just dominating, go ahead and build a Destruction/Rage (whichever you didn’t get earlier) and you’ll be doing even MORE amounts of insane damage.

7. Your last item! I would recommend and item that builds out of Time. You could go for a defensive item like Stability (Reduces duration of disables and slows) or some more damage like Chaos (Chain lightning 100+10% of damage dealt as magic damage to up to 4 enemies, 6s cd). Totally up to you!

Feel free to look through my past Twitch broadcasts, though they aren’t the best quality you can still see how I play in a couple of my games. I’m partial to this one because I got two tetra kills, but I have a couple of other videos on there