The first step to stop being newbie and start becoming an advanced player is to realize that there exists something like a counter. The game uses rock – scissors – paper mechanics, where parry blocks charge, charge counters feint, and feint breaks parry.
While that is true, it is not really precise. I tend to divide moves into two basic cathegories (oficially there are four – real, fake, parry, qi) and that is empty move and lockdown move.

II. How to counter

Countering is simple, yet hard. When you see an enemy use empty move, you use a lockdown skill. This will result in them getting hit by unparriable attack. To be able to counter a move safely, knowing its animation is required, that is why it is hard.
Countering a scholar’s feint with scholar charge skills

Another counter possibility is to counter an empty non-crowd control skill (such as most feints) withcrowd-control empty move. An example: Using kick knockback when enemy uses kick feint.
Countering a scholar’s feint with scholar’s knockback

I. Learn your skills

It is vital to know all your skills perfectly, to know which one does what and when it is best to use them. For that purpose I made quite lame picture with some descriptions, but I hope it helps. In guide I also won’t refer to skills by their names, but by the effect they do (e.g. knockback, feint, charge, rage). 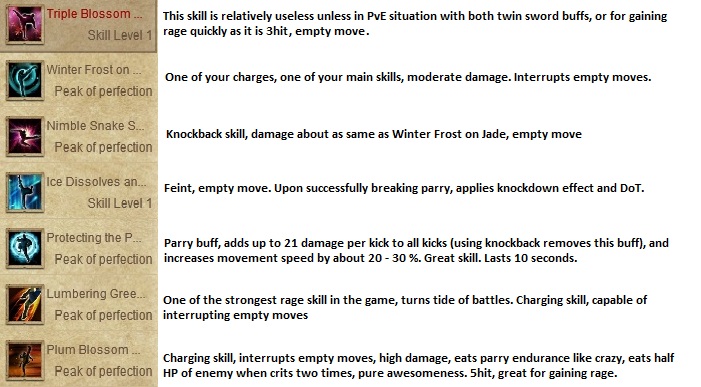 I like to claim that kicks are defensive counter set, but there is also an aggressive strategy with which I do not agree with, but I will include it in this guide as well.

Kicks are a situational set, not dependant on any comboes, but still, there are some variation that could be called a “combo”.

While it is possible to open as defensive style kick scholar, it is still dangerous and hard to pull off. So when you meet an opponent that does not recklessly uses his open moves, kicks are not a viable set, it is time to switch to sword.
Prefered ending with kick set

I. Learn your skills

Same as with kicks, knowing your skills is vital, just randomly bashing buttons will not get you far. Knowing what skills apply which debuff and which effect is very important, especially for sword set, which is combo-reliant set.

As mentioned above, unlike kick set which is defensive counter and rage reliant, sword is combo initiating set. That is quite the complete opposite of kicks, which gives scholars edge in PvP as they are well-rounded. The main concern of your fight is to land a combo. There are basically two combos, which have several variations.

A lot of newbie scholars that just read a guide somewhere and then just spam the skills in the order and hope the combo will pull itself off. That is not how it works. If you fail to use feint, do not bother wasting your knockup. Or if your opponent resist pulldown skill’s disable, you will need to reapply Hero’s Tears and then go for 7hit combo instead of spin combo. There are a lot of variations and the key is to be able to stop in middle of combo and change it into something else. The understanding of your skill effects is a must then.

Another common problem with newbies is that after successfully knocking opponent up, they will use pulldown skill, fly into air and get a “dodge”. This dodge is not due to dodge rate of the enemy, but because the skill knocks up enemies too high that your charge dashes towards your enemy, but as the enemy is on ground by that time, it results into a dodge. There are several ways how to prevent this, Ill share two:

This part of guide is aimed for instances and factions, your main role in these is support. (Yes, you deal damage as well, but you prioritize your buffs over anything else)

I. The use of Twin Swords

So far I have introduced you sword and kick set, it is time to introduce the last skillset – twin swords set. This set shines in PvE more than anything else, it erases mana problems and makes killing twice as fast.

It is very simple and seemingly dull. In PvE situations you use all three set:

Those of you who read up until this point, thank you. This is the end of my guide for now. For any questions, contact me in-game or ask below, I will do my best to answer.

Also, thanks to Dramastana, the current Headmaster of Scholars for acting as my punchbag while making the videos